I bought my first bike, a CBR600fw, from my friend and the tankpad had a picture of Roadrunner Pic below… 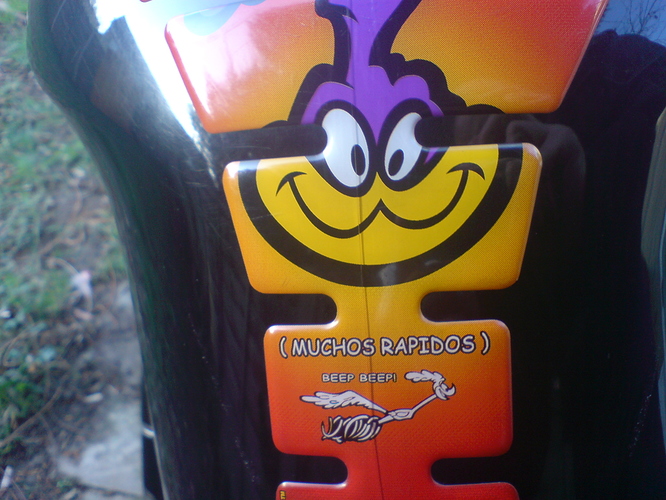 real name josh… was at a party like when someone shouted ‘josh get more beers’ which sounded like joyce… name stuck and thats what my mates all me.

really dont remember where the crazy comes from, i know there is a real reason

i had psylo races on my old bike, gold ones with a lock out thru axle! saved up like 2 summers of mowing lawns and washing cars to buy them! those were the days, having to throw yourself down a big hill and pedal to go fast!

Out shopping in Kings Lynn with a young nephew about 7 years ago, he took me to a cyber cafe where there was a Counter Strike tournament going on with 10 networked pcs. Never played a multiplayer game before that, was told to think of a user name there and then, “eezyrida” was the first thing that came to mind. We ended up playing for 8 hours solid. When I got home, I got my own copy and the addiction continued, same user name.

Was surprised to find the hotmail address was vacant, so of course I nabbed that

That nephew is now 21 and about to book himself on the Direct Access course.

Premises: Because I work in security
187: Because the army infantry had a lot to do with killing stuff.

Cos its always me who gets “stung”:doze:

i was sat on the sh1tter one after noon trying a strength test with mrs smileds bathroom scales…and Smiled just came too me…so i wiped my arse…examined the evidence and throgh it in the bin under the sink…next thing i know i’m logging on to LB…:).
smiled:D.

evolution over years of online gaming from FUBAR through many variants depending on my mood. Fubles or more specifically Dev!l Fubles stuck one night so I’ve sorta just gone with it.

heard the name a while ago, now it used for everything i do on the internet (Boris is not my real name

Dunno how I came up with mine…

Walked into the photocopy room and discovered the new temp from a mates group getting strung out by the illogical messages from the big machine.

Cancelled everything on the machine for her and showed her how to work the stupid thing.

Apparently when she went back to her office and and was asked how she got on with the copying she said said it was a disaster but “…the old guy in the design section that rides a motorcycle sorted it out for me.”

Signed in to LB that night and had to choose a name.

It’s what everybody calls me, well along with shithead, ******, fuckface, bollockchops, and flapfeatures. :w00t::)

plus i have been known as PJ for bloody years:)

ive bin called jimbo for as long as i can remember by loads of different people. it just must be a standard nick name 4 james i spose

The wife has called me, amongst lots of other things, furry for years. I have a beard and am a bit hairy although now rather less on top.

Premises: Because I work in security
187: Because the army infantry had a lot to do with killing stuff.

For those who, like me, have never heard of the 187/killing connection, this should clarify matters.