I’m tarting up a bike I picked up by getting the frame re-coated and after removing the races I’ve found the surface underneath the top one has a few gouges in it - nothing affecting the roundness, just the surface the race sits on.

I’m going to give it a rub with some wet and dry to make sure there are no high spots but I’m a little concerned about the new roller bearing race sitting flush to the frame and being absolutely level after a bit of rubbing in accordance to the lower one on the… the difference (if any) is will probably be minute but just wanted to get some input on it.

Firstly, a warning: I’m not known for my high standards here.

I’d probably not bother with the wet and dry, depending on how bad it is. If the metal’s been dinked in then I’d assume that the surface is probably generally okay and just refit the bearing. If the damage has caused raises in the metal that I could fix with wet and dry, then I’d assume the force of the bearings would sort that out for me. If I couldn’t do it with wet and dry then I’d rather ream it to get it properly flat and parallel with the lower race than risk making it worse. I’ve no idea how easy that is on a motorbike, though, 'cause there’s no standardisation whatsoever…

Would you buy a second hand bike of this man? What’s the problem :Whistling:

You’ve identified a defective bearing cup so replace the headstock bearing as a kit, it should come with rollers, cups and dust seals. Also, if the headstock is going that way best practice would be to check the swinging arm bearings and wheel bearings too

I read that as the surface that receives the bearing race is gouged, not the actual bearing surface.

If the bit the actual bearings sit on is at all not-great just whack a new one in. Generally, if I’m replacing any bit of that I’d just replace all the bearings and surfaces.

So you thinks he may have caused a bit of GBH to the headstock itself in an effort to gouge out the bits and bobs previously known as the headstock bearing :w00t:

So to clarify, if any of this kit is gouged 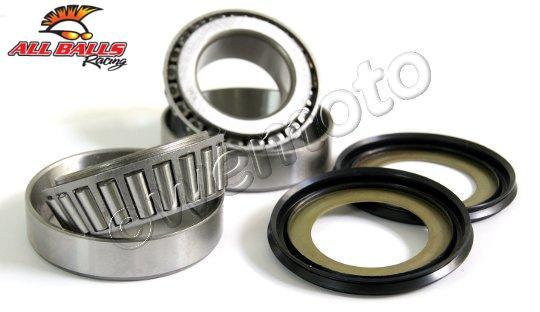 If its the yokes or the headstock itself, the steel tube that accepts the yokes, that are damaged and you’re contemplating a fix using wet n dry you should really call it a day

My suggestion is a trip to Watford

I read that as the surface that receives the bearing race is gouged, not the actual bearing surface.

in the end I just bought a new frame not really too expensive and solved all the problems as the old one had more rust than paint.