Did anyone else know that as of the end of next month, it will no longer be legal to drive abroad with a GB sticker?

I was looking up to see how the order of the länsbokstaver were decided. Unfortunately I never found out, but did see a footnote on ISO 3166-2 saying that as of September 28th the GB stickers will no longer be legal and a UK sticker will be needed instead.

It seems the government requested this change in June, yet have still not announced it. Fortunately the U.N. has, because it comes under an international treaty.

It also means the new Brexit number plates they introduced in January, with a union flag and GB letters, will no longer be usable internationally and will also require an accompanying UK sticker.

Not that my bike has left the country and is unlikely to do so. But maybe a helpful warning to others.

I’ve been traveling abroad with a ENG badge on my numberplate and sometimes with no stickers on my bikes. Never been stopped, but I’d imagine now the cops would be more than happy to fine anyone not sporting the correct signage.

This from the RAC website
" Drivers with hopes of road-tripping through Europe later this year will have to trade in their GB car sticker or magnet for a new ‘UK’ version.

The current sticker used on the back of vehicles will no longer be valid from September 28, the United Nations (UN) has outlined. Instead, motorists will have to replace it with a UK sticker to drive on foreign roads.

The UN said it had received “a notification stating that the United Kingdom is changing the distinguishing sign that it had previously selected for display in international traffic on vehicles registered in the United Kingdom, from ‘GB’ to ‘UK’”.

The switch to a ‘UK’ emblem is the second re-vamp number plates have had this year. In January, Grant Shapps announced UK drivers would be able to drive on the continent without GB stickers thanks to a new registration plate with a Union Flag and GB sign.

He also tweeted an image revealing the updated look of a green number plate, used to signify fully electric vehicles and showcase the incentives of opting for a more environmentally friendly car.

British number plates have previously featured a GB symbol under the cluster of EU stars.

The UK government said in a letter to the UN that the change applies only to the United Kingdom of Great Britain and Northern Ireland and “does not extend to any territories for the international relations of which the United Kingdom is responsible”.

The new UK stickers will be available online, and in post offices and garages for around £1.50.

Looking forward to finally taking a European road trip? Brush up on every legal requirement and get pre-journey tips in our driver’s guides for every European country."

I did wonder what the green stripes were on new cars. Should have made the connection myself, duh. EVs!

Never ran any kind of national sticker on my bikes, never had an issue abroad either. Not feeling massively motivated to update my number plate, I must admit.

I do not know if it is just a standard thing the government do after a year, or whether green number plates have been silently scrapped, but two weeks ago they withdrew the story that announced them. 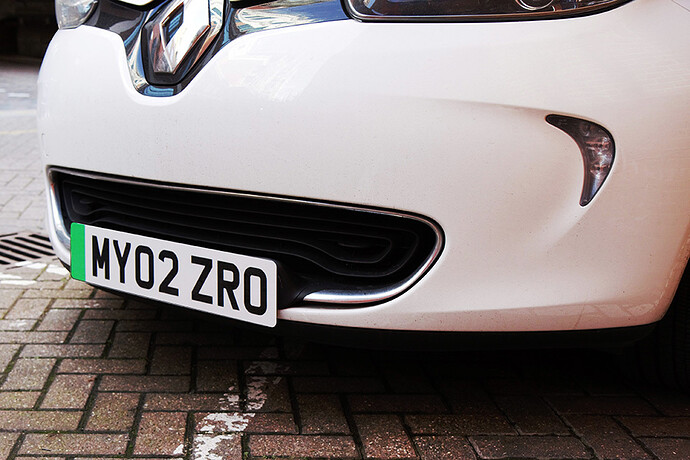 Introduction of green number plates plus a multi-million pound investment for electric vehicle research helping accelerate a zero-emission future for the UK.