@Jay you have done Indy before how was it?

The first time on the track was a bit nerve racking, full acceleration down hill, sod that shit, no thank you I will just roll along

and then the urge to duck down when passing under the signs because of course I am driving a lorry with height restrictions. Then paddock hill, that roller coaster stomach feeling when you get to the bottom and start ascending. Super grateful for those sighting laps to get you familiarised.

By the third session it was better and the second session of the afternoon the best. I was confident to accelerate out of paddock hill and that acceleration significantly got rid of the stomach dipping feeling. On the back straight down the hill, that right hander is massive so you can go hard deep into the corner and not scrub all your speed off. Doesn’t mean I did that

still was early on the brake every time.

The paddock straight is a little more exciting than Donnington even though it is shorter, I think the fact that you are tipped in for the first few meters, but that is still something I am not sure about. Don’t know what are the safe limits to accelerate when at slight lean, so to prevent any issues I short shift into 3rd to keep the revs down and wait till I am completely up right before hammering it.

In the end it was a really good day no incidents for me, but the day was generally plagued with them. Prob about 5 in total starting from the very first of the day, which meant lots of short or cancelled sessions. I think it was partly due to the fact the when its the GP circuit its 4 groups instead of 3 and oversubscribed so the track is packed, so you come up on bunches of 5+ which can cause a tone load of silly decisions. Saw someone go into the run off on paddock hill at full beams, don’t know how he managed to keep it up right.

On to the next one prob late August. @Jay let me know where\when your next session would be, would see if I can make it.

Awesome @kcoops ! Well done trying another circuit! I love Brands Hatch GP. We’re there on the 18th. Would be great to see you there too.

Yep, there’s a lot going on with Brands Hatch. It takes time to get your pace up, lot’s of things you might normally be not comfortable with, i.e. camber and hills.

Obviously the limits of what’s possible depend on many things, i.e. tyres, suspension, chassis, engine size and last but not least, rider skill & experience, though a couple of comments from what you said:

We’re there on the 18th. Would be great to see you there too.

Ok looking at it will get back to you. I will prob make it into a family outing if I do. Yesterday my son came down and he absolutely loved it couldn’t stop going on about it. This misses thought, why the hell are you going so fast !! then she saw the advanced group and was like yeah you ok, you not really that fast.

You can be at full power whilst on medium lean on a modern bike with good tyres and a suspension setup as long as you build to it smoothly with the throttle, no harsh inputs. If you do exceed the available grip, traction control will keep you safe

So coming onto the pit lane straight you can be at full power before completely upright as you’re on the fat part of the tyre by then, it’s only the very edge of the tyre where the footprint reduces, and therefore grip. Been a while since I’ve done the GP circuit, but on the Indy circuit I do not short-shift there.

It is my fear of high sides, on one of my first tack days at bedford autodrome there is a similar corner and I saw at least two guys get exited with the power, lose the rear, then it catches traction and just flicks them off. With one, as he fell the bike came over and missed him by a breadth. But I get what you mean. will practice practice practice and build to that capability.

This misses thought, why the hell are you going so fast !! then she saw the advanced group and was like yeah you ok, you not really that fast.

It is my fear of high sides, on one of my first tack days at bedford autodrome there is a similar corner and I saw at least two guys get exited with the power, lose the rear, then it catches traction and just flicks them off. With one, as he fell the bike came over and missed him by a breadth. But I get what you mean. will practice practice practice and build to that capability.

You need to do some off-roading mate. You should come green-laning some time. It teaches essential skills about traction that are directly relatable to track riding. It’s totally normal to have some slides, but you need a bit of experience off road to learn to be comfortable with it. It’s impossible not to slide when off-roading, and you get used to it, so that when it happens on tarmac, your thought process ends up as “okay, there’s the limit”, rather than “OH FUCK!!!”

You’d be hard-pushed to high-side your S1000RR, the TC is there to stop that. Especially on a long, sweeping, building corner. People normally get caught out when they apply too much throttle too quickly when quite far lent over, not when you’re building power smoothly and on the fat part of the tyre.

Have you adjusted the TC settings at all? Might be worth checking them so you know where you are when in track mode. By default they normally come configured quite conservatively, which will actually hold you back as it limits power on corner exit.

A friend of mine greenlaning skills may have come in handy here, not so much for the lad behind 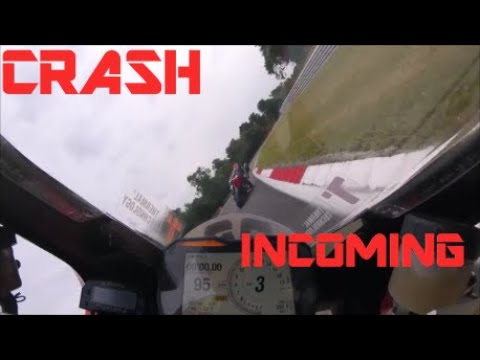 @nivag Skill or total luck there

. Worst thing to do is to follow\chase someone, assuming that is actually what the guy was doing​:disappointed_relieved:, on track its hard to fight the temptation.

That is that wide corner after the downhill (don’t know what its called) but he had to be balls deep full throttle to come off like that.

You need to do some off-roading mate. You should come green-laning some time. It teaches essential skills about traction that are directly relatable to track riding

I have looked into it briefly, apart from not having the right bike it seems I would need to go far off to get decent tracks every time they seem few and far in between.

I keep thinking I need to do a trackday one day…

That guy was lucky. Nice hard, dry grass, no sudden application of brakes (unlike the guy behind).

Probably tried to enter that corner at the same speed as normal, even though he was a couple of meters off line on the inside to pass the previous person. Wasn’t going to work, was going to run wide on exit. Sometimes very hard to tell when at pace!

Sucks for the guy behind who washed out. That’s like trying to follow your mate on the road whose overtaking a car when there’s not much room, you just don’t, you wait until you have a gap.

Come on then book into Brands Hatch on the 18th…

Supposed to be working, that’s if I’ve shifted this kidney stone by then…
Either way not sure I fancy doing my first track day on my Tiger 1200

Why not? You see quite a few on big adv bikes at trackdays now

Good luck with the kidney stone.

Yup you do find all sorts of bikes, but never seen an adventure bike, a few sport tourers and nakeds. I am trying to convince my neighbour to come, he has the KTM 1290 Super Duke. Only thing to potentially worry about will be the foot rest touching the ground on the hair pin.

I keep seeing BMW GS’ and some KTM Adventures out on track. Seems to be a growing trend.

SD1290 would be awesome on track. I never had clearance issues on mine, though I did I have the sport rearsets fitted to mine.

Mainly because I’d be so worried about throwing it down the road that I probably would.

Thanks, it hit over a week ago and still waiting for it to pass unfortunately, 2 weeks of work cancelled so far annoyingly.

Yeah, see that Chad has been doing it as well. Cracking bikes. I nearly bought one.