Eating out in central

Took advantage of Eat Out To Help Out a couple of times this week, taking the MT-07 and gf along with me! 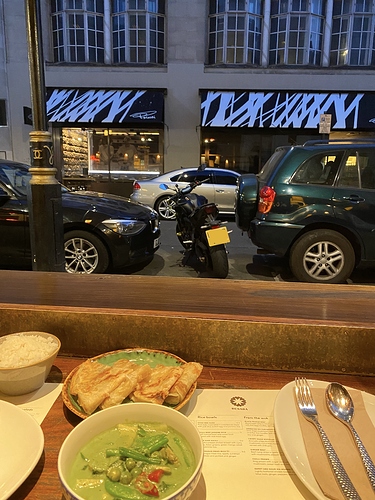 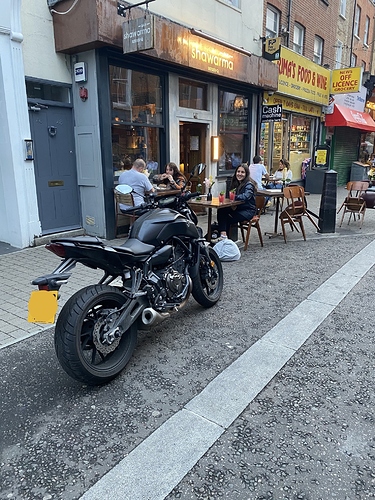 Not my cuppa tea but your g/f looks happy as Larry on it. Where is the Government getting the funding for all these hand outs?

I hope them Tax Payers are giving priority to my Pension

your g/f looks happy as Larry

his Gf is named Larry!?

It costs the government much less than the alternative.

And just getting people out and into town centres where they will also shop or find other things to do will also help those other tax paying businesses.

Compared with the costs of paying for furloughing, unemployment, and benefits, an up to £10 subsidy per meal hardly costs anything in the grand scheme of things a national budget.

Whether encouraging people to congregate indoors at a time when an infectious virus is still active is another matter. There are currently 22 areas which have had to reverse lockdown measure so far.

I agree that the idea behind it is good… and yes getting people spending is important.

However, it feels like this measure is designed to keep the business environment perpetuated.

Covid should have been an opportunity to look at what types of businesses we want, how society is taxed to create a more stable society, less dependant on large scale commercial chains populating every high street in an identikit fashion because they’re the only ones that can supposedly make it work, even if they pay staff peanuts.

I bet you anything that if you had, for example, childcare that cost a couple hundred euros (once over a certain financial threshold), more people would be able to work & produce rather than have to worry about whether to work or stay at home.

Likewise, more smaller businesses means less chance of mass closures in one go so the potential effect of redundancies is softened, smoothened out over time.

We can’t really take advantage of it but, even if we could, I don’t think we would. First of all we don’t really go out Mon-Weds anymore and our favourite bar in town (I live in a small town) has chosen not to take part in the scheme, and I kind of agree with them. They have a good & regular clientele so don’t need to.

Compared with the costs of paying for furloughing, unemployment, and benefits, an up to £10 subsidy per meal hardly costs anything in the grand scheme of things a national budget.

Whether encouraging people to congregate indoors at a time when an infectious virus is still active is another matter. There are currently 22 areas which have had to reverse lockdown measure so far.

Well the first point is a strange on. I just been listening to a Radio program and people are trying to claim Universal Credit. The big shock that a lot of people have found out is that it is a household benefit. So if income for the household/address is above a certain level, well you can’t claim and you get nothing.

As for the virus, I’ve been to two places and have benefited from this current deal. Both where outside, and seating was more than 2 metres apart and you had to wait to go inside to order and people where being sensible.

The inside / outside thing is not really the issue… People can bunch up together in both.

Greece at the moment is experiencing a higher number of cases and that’s been blamed on outside fetes where too many people congregate (on top of everyone heading out to the islands for August).

I’ve also seen a few statisticians try to point out that the more testing happens, the more asymptomatic cases you get and therefore everything’s fine… I don’t really agree with it but at the moment I’m taking a bit of a back stage on commenting on whether or not the virus is coming back and still as deadly and whether everything should open up again.

It’s a weird time and I have definitely reduced how much I go out and changed where I go out to… Personally I 've never been one to dictate where I go based on what coupon / voucher I have. I like to go to places I like…

But I’m fortunate to not have to worry about my cashflow and be able to afford this. Many others are not and anything that makes them feel a bit more human and helps them do that I welcome. And happy to pay tax for.

What I resent paying tax for is to keep crappy chains alive which have been taking the mick of their workforce (i.e. charging them for tips)… I wish there was a way that it was only available to those paying living wage and beyond. You’d then see how many chose to pay their staff better.

There was a guy on American TV who was arguing for bailing out individuals and not companies. He point out several large companies that had previously taken government money for doing X, not doing X and then getting additional tax breaks because we can’t actually do X, and then promptly sacking lots of employees.

His argument was that if the business can’t cope without government support, then it should fail, and any employees should then be bailout out by the government and supported.

Not just that but how society is structured in general.

Obviously there is only so much you can change at short notice, but it has been barely debated that the old ways are no longer working. And the risk of a pandemic was already seen as a serious threat, it makes no sense to think if we can get through this one that risk will go away.

Yes I agree in part… that’s the hard capitalist model rather than the one this government has which is to save the industries that will generate more PR noise and be selective.

However, if you let all companies fail there will be a very hard period to deal with all redundancies.

Probably will be better once it’s all done and we’ve moved into a new era but that will take many years and the hurt till then might not be worth it. However I bet you if it was Brexit, all the pain in the world is worth it.

But I’m sure none of these points (or the threads above) was what @kylejs had in mind when we just told us he went to eat out!

Trickle down economics has proven to not work over at least the last 10 years. It’s time for trickle up economics.

On the subject of Eat Out To Help Out, my town has a nice square with plenty of restaurants on the side streets nearby. Lots of tables and chairs have been put out on the square for local delivery by the restaurants who take it in turns to use the space per day. Brilliant idea.

None of them qualify for EOTHO because the food is being taken away from the place of business.

I’m wondering if this is a way for the Boris and Cuntings to implement their discredited herd immunity plan?

@me_groovy wife and I have had take out twice now and got the discounted price. I think the establishment has to sign up to the scheme.

EOTHO is a fucking joke. Giving help to an industry that is already open and trading? Piss off, what about the industries that remain closed and are making enormous numbers of people redundant?