I did this about 6 years ago. It appears to have grown rapidly over the years, this time it is at a much more pleasant time of year (here is hoping) 23rd May, London spaces still available, who is going?

The route appears to be around Westminster and Buckingham Palace which is pleasant enough.

Plus a great cause. Men’s mental health and prostate cancer. Dress dapper…

Information for the DGR London Ride

I remember seeing a bunch of bikes in suits, ties etc a couple of years around Plumpton in Sussex and it was quite a peculiar, yet entertaining sight.

At the time didn’t know what it was but someone pointed me to this (a local version?).

I love dressing dapper and I’ve seen this one go past a few times but sadly I do not have the right type of motorcycle, unless somebody wants to lend me a harley. 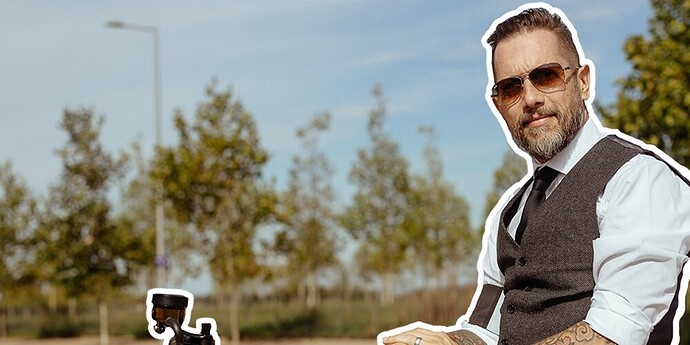 Pfft. Take what you have got! It is the taking part that matters…

Years ago I did it on my CBR600RR and this year on my ZZR1400. I’ll just have to dress more dapper to make up for it

I like the idea of this. Also thought the correct bike was essential.

I think it was originally but it excludes people that want to support this and don’t have the ‘correct’ bike. I wanted to do it on my KTM 690 Enduro R a few years ago but it clashed with another event.

Given that I am neither distinguished nor a gentleman, shall give this one a swerve.

Im going this year should be good

Genuinely interested but have read that there is much sneering at those without the correct bike, this I can do without.

Is it clear yet what the format will be?

Update: it’s a route only ride. (Was first advertised as a solo ride format). Still no big meet, no ride leaders. The main purpose is to rise awareness and funds for mental health and prostate cancer. Doing it again this year.

There was a bit of snobbery about having the right bike. Had a KTM before and couldn’t officially participate. Riding my street twin this year. All that aside, it’s for a good cause.

@Jay LondonBiker has such a massive following, have you\we ever tried to put something like this together for a good or similar cause. I know its a massive, massive headache and responsibility, but we have a good mix of public officers and professionals to help point in the right direction. police officers, lawyers, paramedics.

Or is the thought of it debilitating.

@kcoops we’ve actually got a long history of supporting charity, though we’ve not done anything on that front for a while (@GSXRAng used to help us with this) . Our official charity is the London Air Ambulance. We’ve raised many thousands of pounds for them in the past.

We’ve also supported many a charity ride or event. We were the official motorcycle marshals for some of the breast cancer charity walks and have been on a number of other charity/cause rides.

Unfortunately you wouldn’t know this necessarily because a) we took the editorial/photo gallery section of the site offline when we re-launched the website and b) haven’t done anything for a while!

LB has mainly been a community-lead venture as far as organisation goes, with members stepping up and helping to organise things. That said, I’m not adverse to the idea of helping LB organise things if there’s enough interest from the community

For instance, here’s a recent post about the time we were motorcycle marshalls: Breaktrhu Breast Cancer Walk London LB

Oh nice one. When the apocalypse is over probably a few suggestions might pop up.

I find it disappointing that people feel ostracised from such an event on the basis of motorcycle. Bikers are generally thick skinned folk

So I vote let’s just go!

Just my 2cents. If you see my there, please say hello. ZZR1400 final edition, big beard… grown especially for the event

Hello mate, it still says route only ride for london, what makes you think it’s now a solo ride? Did you get any info?

I think it has changed! Was surprised to see that yesterday. I think it was a solo ride at the time the question came up.

I’ve signed up, gawd knows what to wear as I’ve spent the last year and a half in my underpants!

…9am breakfast at the Bike Shed…bet it’s fully booked!

Got a table at the Bike Shed for breakfast at 9am on Sunday, who’s joining us?