So, i found a triumph daytona yesterday evening, in my mates yard, leytonstone. Fake plates, managed to find real plate via vin number. Stolen in kenyish town on september 2016, reported to police, they didn’t manage to come and check from 9pm to 4am, couldn’t wait any longer, so left home, hoping old bill will come sooner than scrotes. 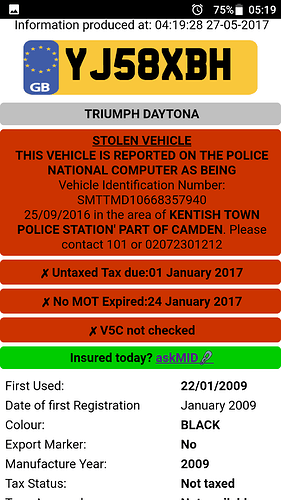 Stolen in Kentish Town September 2016 it’ll probably be the property of an insurance company by now.

If you want it you could make a bid on it to the insurance company. Since the motorcycle has been abandoned in your mates yard it shouldn’t be too difficult to get details via DVLA of the last known registered keeper, from there you can get details of the rightful owner (insurance company or last keeper) and make a bid.

does your mate know how it ended up in his yard?

If I was a gambling man I’d wager it’ll be a communal yard dumped there due to defects (tyres).

Take care someone may be on the look out for a replacement.

Good effort, even if as NT says it’s now an insurance owned bike.

Shame the police haven’t got the resources to follow up on a stollen bike. Nothing new there sadly.

How do you find out who the insurer was?

Is there anything wrong with wheeling it somewhere safe, whilst awaiting the owners? Or is it best to leave it where it is. out of interest.

Annoyijgnyou can’t have anything without someone trying to Nick it. And the old Bill are too stretched and bound by policies to do what they need to.

Plate from a scoot

Strange how its still taxed
And makes the tag line a bit funnier . 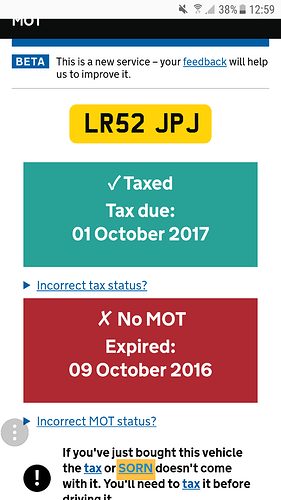 So, sad ending with a bike. As police told not to touch the bike, we did not… left the place around 4am, went home to sleep, still no news from police, although they were called a few times to ask if they are coming or not. They assured that they are coming, but could not give an estimate time during all of the calls we made. So i went to sleep, and around 12pm i got a text from that mate, that the bike is gone. So apparently scrotes came back in the middle of bright day, around 12pm, in a corsa with a fake plates (must be stolen as well) and wheeled the bike out… that was on saturday. And old bill called my mate on sunday’s morning to inquire about the bike. basically two days after.

Trust the police they say, they are trustworthy they say…

Hopefully scrotes will think they found a nice spot to dump a bike, and they are coming back and leaving any other, or the same bike, which will be looked after by us, don’t trust  the police anymore.

these guys tracked down stolen bike and then involved police.

This is so sad… someone’s bike could so easily have been recovered if the police could have spared 1 officer to come and look into it.

In all fairness to the plod, they do tend to have their hands full dealing with drunken shenanigans on a Friday night. That does leave Saturday morning, but in light of last week’s events, I think a bike nicked months ago would be somewhat down their list of priorities.

Moral of the story is, if you find a bike abandoned for that amount of time, strip what you can off it, ebay it, give some money to charity.

Not going to call out the police on this, simply because it is a financial lose to someone rather than physical assault/injury.  And given their cut in numbers and budget has been slashed it is hardly surprising that a stolen bike from last year has such low priority.