I want one. Anybody got one or experience with one? They don’t seem to be very popular even though voted best 600 class sport bikes a few times. I’m aware Triumph parts can be expensive, any other down falls?

you want to speak to Andrew&7 who had one. Simon who runs the OMC has one now.

I remember sitting on one someone had down at the OMC (not Simon, a customer) and thinking it was very tall.

If I ever bought a sportsbike, that would be my top option

Alex, that is probably the one they store over the weekend for someone who’s lucky enough to own a daytona and a speed triple. the daytona is for the weekends so he comes and swap it on saturdays usually. nice chap.

oh yeah, Kostas has a gorgeous white one with a blue frame

you want to speak to Andrew&7 who had one. Simon who runs the OMC has one now.

The one Simon at OMC has is Andrews old one if I remember correctly.

Not owned one but have sat one one and its a tight snug race position compared to others. Puts a fair bit of pressure on wrists etc so not great for longer rides.

Maybe partly why not many folk have them. Look like sew weeeee though. Would consider one for a track wespon.

I particulary like it in red. Still waiting for insurance to get back to me. Once I’ve got payment I think I’ll do some shopping around 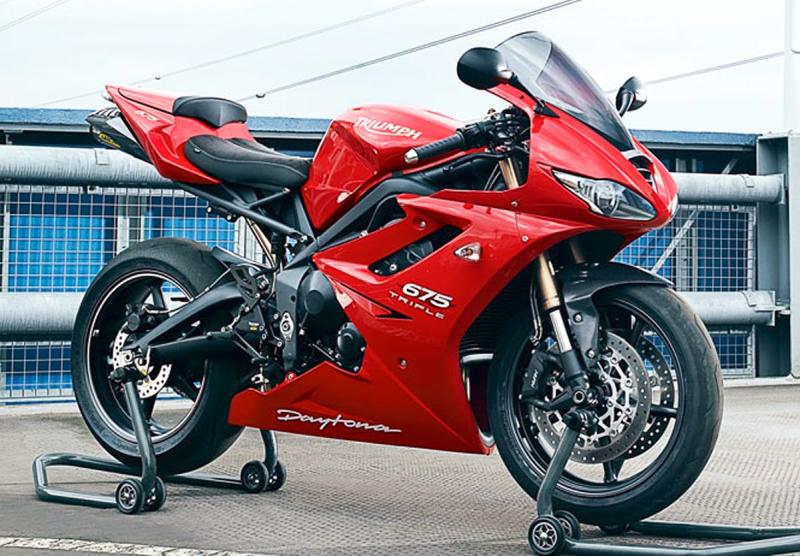 we sell them, they are a very popular machine!

red, grey, white… that bike is a stunner!

tell that to mine…

Bought one yet Tom?

My experience with Triumph in general is appalling. My D600 was in pieces more often than not, I went through 6 stators and 4 regs in 3 years. I went to test ride a 675 and it broke down 5 miles from the dealer.
I wouldn’t touch another Triumph if you paid me, seriously.
As far as the D600 is concerned, the block is first rate, based on a zx6. unfortunately they surrounded it with utterly inadequate parts. Their innovative ‘centrifugal breather’ let oil past frequently, as the rubber seal gives up the ghost every so often. Pointless taking it in heavy traffic, it overheated in no time at all, (at which point the already solder-meltingly hot stator would begin it’s demise). The connection between the stator and reg frequently melts too, a matter of inches from the fuel lines.
As a track bike it was tremendous, but putting any commuter miles on it was extremely expensive. The throttle position sensor went too, but didn’t throw an error light so was virtually impossible to trace. Triumph didn’t pick it up either, so i spent 6 months riding round with a variable idle, anywhere from stall to 6000rpm. That made riding in traffic something of an adventure.
You would think that after electrical problems associated with the D6, they would have got the 675 right… yet there was a recall on regs and stators for the 675 last year!
The only benefit to owning a Triumph as far as I can see is the vast amount of mechanical knowldge I picked up by virtue of taking it apart every weekend. My ebay bills run into thousands of pounds, although I’ve never dared to tot them up properly.
In my expereience, buying a Trumpet is a bit of a lottery. Some people clock up vast distances without any significant problems, others are plagued with inexplicable problems. The electrical system is so marginal that if you have ideas of adding electrical accessories like heated grips or a satnav you are likely to end up in flames. Simple tests reveal that Triumph have tried desperately to compromise their overheating problems with their electrical problems. They can’t bring the tick over up because the bike overheats in 2 minutes, but they can’t drop the tick over too far because the stator doesn’t revolve fast enough to provide enough charge to run the bike. The result is far from ideal. I became quite obsessed in the end, changing almost every component in an attempt to get it running right. swapped throttle bodies/new maps/digital throttle body balance at triumph/oil changes every five minutes/head gasket replacement/valve clearance checks/wiring loom upgrades/upgraded batteries/fuel pump/filter… you name it, I swapped it. To no avail, neither I or Triumph ever solved the underlying problems.
Tankslap.com is worth checking, it became the home of the old D600.org site, so lots of 675 owners kicking about too.
Trat is also worth looking at, specifically the 675 section in supersports, you will get an idea of the problems quite quickly by looking through a few of those posts.
Personally, I remain bitterly disappointed with Triumph. Insanely expensive parts, mediocre customer service from dealers (at best), and the use of some pretty shoddy parts, most especially in the electrical dept. I think they have been trading on their reputation of ‘British quality’ on and off for a long time, but the reality is very different. Even more frustrating, because when I look at the pictures of it, it truly was a beautiful machine, as is the 675.
By contrast, I bought a Hondax11 last year, and now I don’t know what to do with all my spare time. I took the tank off for the first time in 4000 miles last week to replace the airfilter. It has chugged through the rain wind and snow every week without ever faltering.

I think in fairness, you can always end up with a Friday afternoon bike in any marque etc. Generlly speaking the 675`s are an excellent bike and imk not just saying that because i sell them!. We dont get many plagued by problems, we get very few in Part exchange as they are very sought after and well maintained at dealers.

Out of all of the Triumphs ive owned, and ive owned a few and done some pretty decent mileages on them ive only ever once had one that cost me a fortune and that was my 955i Speed Triple, but she had done 55000 miles by the time i sold it.

Its slightly unfair to say that the brand is more unreliable than the jap stuff because all bikes can fail and cost money.

I had a crap suzuki that cost me a fortune and was a bag of ****. I wouldnt say id never buy another, and the same can be said for dealers, most are generally very good and will always try and rectify any issues or sort customers problems, but then i guess also it depends on how afr you go with that etc.

Very true, and for every person complaining bitterly online, there’s 1000 that have never had a problem. I can also say that on the rare occasions it was running well it was a truly astonishing bike to ride. I have to say though, that electrical problems with the D6/speed4/TT are somewhat legendary on Triumph forums. I know its impossible to tell what percentage of D600’s are affected, but its clearly a significant and fundamental problem given the wealth of posts on the subject.

Matt - cheers for sorting the test ride out for me mate. It was an absolute dream to ride. I think I was smiling all the way through it. The bike is so repsonsive. I’m not an experienced rider by all means, I’ve only ridden my ZX6R and my mates gixxer K7 but the 675 shits all over them both with acceleration in my opinion. Sounds fucking great with the arrow can. I **** up a few grannies along the way

It’s not as comfortable as the ZX6R or Gixxer but who rides for comort; sofas and beds are for comfort. I should hopefully be getting one before long