Set off this morning and all fine until I hit the North Circular. Powered off the slip road and cough splutter, anything over 3000 and it just gives up. Won’t go over 40mph and when you back off to stop at the lights is backfires.

Feels like a fuel flow or carb problem, any ideas?

I’m not mechanically minded so any pointers would be much appreciated.

my '95 zx9 did that at certain speeds. was one of the vacuum tubes had come undone under the airbox. 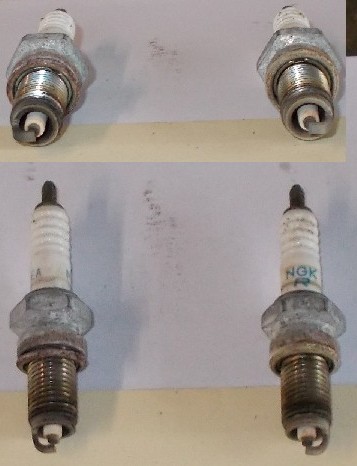 Great thanks guys, will dig out the Haynes manual and have a look.

It’s not been used much over the last 3 years or so, it’s new to me, so plugs probably need to be replaced any way.

could be a split air hose

Are these not a bit too white? Or is it only two smokes that should be latte coloured?

Well I got the tank off checked all hoses, air filter and fuel filter. Nothing disconnected, nothing worn or tired looking. Will get the air box off tomorrow night and check the plugs.

Make sure you check those vacuum hoses thoroughly, sometimes you need to flex them a bit to spot the split.

Make sure you check those vacuum hoses thoroughly, sometimes you need to flex them a bit to spot the split.
It sounds like your AF mixture is off, so either air or fuel problem. The bikefire suggests too much fuel. If your bike is carbed I’d be whipping the fuel bowls off and checking that the floats are operating correctly. The symptoms you describe might suggest an electrical problem too, if you have a multimeter check that the bike is charging at least one full volt over the batteries ‘rest’ voltage. Your battery isn’t man enough to run the bike, it needs the ‘oomph’ of current from the stator to run the ignition system effectively. The battery will run the bike, but under load it starts to struggle.

But I think you are confusing me with someone who either knows what they are doing or understands a word of what you just said.

Getting the tank off was an accomplishment for me!

have you a haynes manual?

But I think you are confusing me with someone who either knows what they are doing or understands a word of what you just said.

Getting the tank off was an accomplishment for me!

‘Healthy plugs should look SIMILAR to these’

If the firing end of a spark plug is anywhere between a light grey and a tan brown the the spark plug is functioning as it should, and the fuel/ignition systems can be considered to be about where they should be

Are these not a bit too white? Or is it only two smokes that should be latte coloured?

Nothing complicated under there really, even if it looks intimidating

These days, they have bunged a few fancy gadgets on, but essentially the old mantra still applies. For your bike to run properly you need; air, fuel, and a spark. You need these in very specific quantities.
You might imagine that petrol and air mixed together with a spark will always ignite, but that’s not the case.
This is why the endlessly knowledgable Art is posting pictures of the plugs, it’s the equivalent of sticking a thermometer in the patienrt’s mouth. If it’s been starved of air, fuel or spark, then the state of the plugs will reflect this. It’s known as running ‘lean’ or ‘rich’, where lean refers to an engine that is receiving too little fuel (or too much air air), and rich refers to an engine that’s receiving too much fuel (or too little air).
You can’t directly measure the ratio of air/fuel that’s reaching your cylinders, but things like plug condition gives a good indication.
So,
Air flow: Check for kinked or split hoses. Remember that the af is critical, so the smallest split can cause a huge problem, especially when the engine is under load and the air flow is high. One trick is to spray some carb cleaner or similar around the general area. If there is a leak, the bike will suck a small quantity of the carb cleaner through and because it’s flammable, it will alter the note of the engine. You also have a bundle of vacuum hoses under there, they need checking too, they’re the hoses about the width of a pencil that connect to your carbs. On the subject of air, a really badly blocked airfilter would cause the problem you describe, but it’s generally a problem that happens gradually (unless a seagull has inadvertently flown up your intake).

Fuel: Ideally, you would be checking that your carbs are functioning properly, but in lieu of that, you can at least check everything around them. For example, your fuel tank isn’t a sealed unit. As the engine draws fuel down it creates a vacuum in the tank, so clearly you need to let air into the tank at the top or the bike won’t get fuel from the bottom. There are a couple of breather hoses that lead from your tank, one is to safely divert the fuel you accidentally spill around the lip of the filler cap, the other is to vent the tank. Make sure these are freely routed down the side of the bike, and not kinked.

Spark: You’ve clearly got a spark, because the bike is running. However, that doesn’t guarantee a healthy spark under load. Clearly producing a spark requires a sufficient amount of electrickery, and more so when you’re producing those sparks in quick succession. A rough and ready check on your electrical system is to buy a 10 quid multimeter from B and Q, set it to 20v DC, and put the probes across your battery.
You test: The voltage before you switch anything on, then the voltage with the bike running. You are looking for a rise of at least 1 volt.

The ‘sudden’ nature of your problem suggests to me a fairly obvious problem. It’s the intermittent faults that are hard to pin down. (well it was doing it on the way here mate!)
My money is on a disconnected/split/perished/blocked bit of rubber causing your issue.

Plugs are the logical place to start, don’t just change them though, check the condition of the firing tip against a plug condition chart. NGK have one on their inter webby site here NGK firing tip appearance chart

Depending on plug condition, I’m thinking gummed up fuel system due to lack of use/standing idle. Follow the advice of Mr Scorch. Dismantle the carburettors and thoroughly clean the internals with a carb cleaner spray, best done by following a step by step in a Haynes or similar.

… It’s not been used much over the last 3 years or so, it’s new to me, so plugs probably need to be replaced any way.

Should we be charging for this knowledge base?

+1
carbs aren’t as complicated as you’d think. Handy tip: take lots of pictures on your phone as you dismantle, providing a handy reference guide if you get stuck re-assembling. Take your time, lay things out in order as you take them off. I tend to take them indoors and do it under a bright light at the kitchen table. I can supply you with the relevant bits of the manual if you feel you need it.

And if you feel the task is intimidating, I often reflect upon the fact that somewhere in a vast workshop in the far east, a little old lady assembles 100 of them before lunch. Probably.

Ok with your advice I will try again at the weekend. I have the Haynes manual. So as you say I will just take my time and see what I can do. Hopefully I won’t create a bigger problem than I started with.

I will keep you informed of my progress or lack thereof.

Well here is the offending article

Thanks for all the advice, feels good to actually fix something on my own, well nearly on my own