CG125 BR-K Overheats and cuts out when idle

I decided to take on the project of converting my little CG125 in to Café Racer, I still have to do the single seat conversion, fender, paint and speedo though. This is it so far… 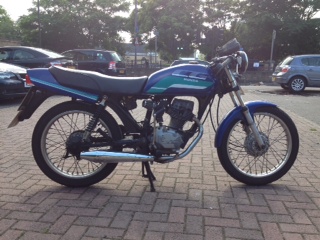 Aaaaanyway, So it runs great for a while then at about the 10 mile mark (from cold) if I stop at some lights it will sort of almost skip a beat, get quieter and just die. I’ve checked the spark plug to see if its rich or lean but it seems to be fine, I figure it’s over heating but I haven’t a clue how to stop that

I re-jetted the carb for the exhaust and checked the valve clearances…
I may just point out that when pulling away from lights it moves and revs up then it wants to stall… I’m not sure how to explain it but pulling the clutch in slightly and letting go to the throttle then going again works.

If anyone has the faintest of ideas as to what could be wrong I’d be forever in your debt!!!

How old is it?

That’s my two penny’s worth

How old is it?

I just had a play with the main jet and put in a 110 from 98 and it almost **** itself… It was idling running so fast and changing the idle speed and or pilot screw position did nothing.

Even after putting the original main jet back it still doesn’t run right at all, I’m not too sure what I’ve done.

I think a swift trip to a dyno is in order

nah, take it to the OMC with your spare jets, Matt there will help you sort it out.

Bent needle? Air leak/starvation? I’d have more useful input if it was parked in my workshop

Give me a shout if you don’t resolve this

Mutton dressed up as …

Assuming it was running right before you changed the exhaust it should be a simple fuel symptoms tweak.

An easier project would have been to start with a CBR125 as a base, you could pick up a used but slightly battered one for around £1,000

Bent needle? Air leak/starvation? I’d have more useful input if it was parked in my workshop

Give me a shout if you don’t resolve this

The needle seems straight.
It needs a proper look at but I wouldn’t be able to get it to Watford!

Art - I re-jetted the carb for the exhaust, it’s only lately the symptoms have gotten worse.
You say it’s mutton dressed as lamb and you are entitled to your opinion however, I have absolutely no budget and am doing this as and when I have money and for that in my humble opinion reckon it doesn’t look that bad. I also got the bike for free!

The problem will be nigh on impossible to diagnose on line, as good and bad as the inter webby is it is the inter webby and comes with all manner of baggage and limitations. Get it to a reputable mechanic who has a hands on reputation for getting things sorted.

Scorch in Watford, OMC in South London SW8 and Essential Rubber in East London E3 - all come highly recommended and have an excellent reputation amongst London Bikers.

If it has been running as it should do with the after market exhaust and carburettor set up then this is most likely an entirely unrelated matter other than it is an air/fuel system fault. The entire fuelling system needs to be given the once over by someone who knows what they’re looking at and who understands the fulling requirements of a naturally aspirated combustion engine.

If you want another DIY look yourself I’d start by looking at the spark plug immediately after the 10 mile cut out.

I’m going to have to take it to OMC as they are closest to me and the fact I’ll learn more, only down side is, I’ll have to push the friggin thing!

Thanks for the recommendations and advice everyone!

Hopefully I’ll get it sorted out soon.