Cabbies Getting Their Knickers In a Twist - Tomorrow 2pm

The poor ickle taxi drivers are getting picked on by bigger boys with smartphone apps and whatnot so they’re going to have a sulk in central London tomorrow afternoon and cause even more chaos than they usually do. Might be best to avoid riding through Westminster after 2pm if you can

If they wanted a proper sulk they should do it during rush hour like the French would.

It’s a classic case of luddites and old boys network being caught with their pants down as the world has moved on.

^ would anyone notice if they did that? Queues of slow moving taxis is already what rush hour looks like in central London.

^ would anyone notice if they did that? Queues of slow moving taxis is already what rush hour looks like in central London.

Spot on…ride through the city centre during rush hour and its fairly easy to spot 10 cabs in a row - get rid of them, make everyone ride a bike.

The app would presumably help there - with taxis being directed straight to waiting customers rather than empty cabs driving round in circles, causing congestion & pollution while they look for a fare.

A cab without a paying customer is about the most pointless vehicle on the road - at least a single occupancy Chelsea tractor is taking one person where they want to go.

I didn’t go on the notobiketax slow ride or profess any opinion one way or the other about people who did.

I still don’t really understand what it is about black cabs that means they can use bus lanes when booked minicabs can’t, probably little more than a quirk of history combined with a vocal lobby.

I accidentally clicked through to the LTDA website and saw this earlier so it’s hard for them to claim any great superiority in terms of service or driving standards.

Normally when drivers accumulate 12 points on their licence they receive an automatic 6 month ban, but in the case of LTDA members, over 90% of those represented by our barristers receive a ban of just 1 month, or in most cases, no ban whatsoever.

The thing with London Taxi drivers is they want their pay back.

Can you imagine how disappointed they must be that after 3 or 4 or mores years of studying and learning all they’ve become is a Cab Driver. Spending day after day driving around in circles in ever increasing traffic congestion with more and more competition and less tips, and now this an iphoney app innit FFS :w00t:

A little more thought at Manor House and they could have ended up as Lawyers or Doctors or Civil Engineers but they chose the path to Gibson Square.

and then I stumbled upon this

looking at this live on TV now, it is proper grid locked out there.

Yeah, just checked the bbc jam cams and they’re parked up across both lanes with their doors open so no filtering even.

lve heard its hell out there, thank god for motorcycles. not sure what they cry about though, kabbee is in uk for some time now and they suddenly got upset by uber ? what for ? they use damn bus lanes yet still l have never paid less for black cab than set prce from addion lee or other!

LOL look at this mess 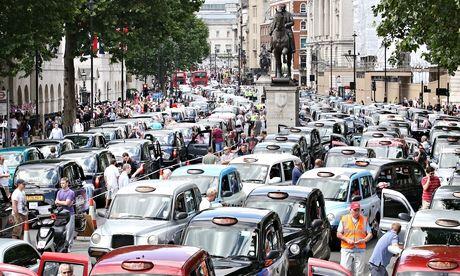 Get rid of the London black cabs and you will end up with more Addison Lee arseholes driving about on dubious licences and dodgy driving skills.

Good on the cabbies for making a stand for their livelihoods which takes them around 4 years to learn.

Get rid of the London black cabs and you will end up with more Addison Lee arseholes driving about on dubious licences and dodgy driving skills.

Good on the cabbies for making a stand for their livelihoods which takes them around 4 years to learn.