At what point does an obsession become unhealthy?

I read this on the BBC website and it freaked me out!! Is she mental?? She’s 40, not 15 and as for her husband - I’d be walking right out of the door if my missus was getting Oasis tattoo’d on her back… now if i were the sugar babes - I might stick around!

But in all honesty, its just creepy in my opinion!

It got me thinking about at what point an obsession becomes unhealthy. I used to travel home and away to watch liverpool (gave it up last season and only travel in Europe now) but I’ve got mates who are on the 4th or 5 wife purely as a result of football. These lads live, breathe and eat it - they holiday in europe with liverpool, they spend all of their disposable income on the match (or beer associated with it) and I’m actually happy that I grew up a bit and decided I’d rather do other things with my time than trek around the world watching them this season… I know its each to their own, but still this just freaked me out! 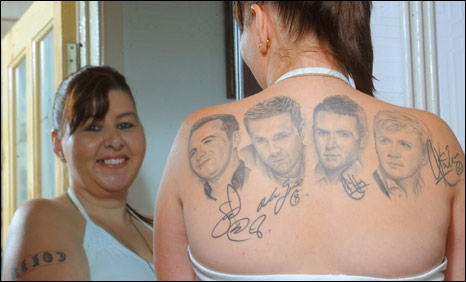 Vicky Jones says she is Westlife’s biggest fan and has been to 300 concertsAn ‘obsessed’ Westlife fan has celebrated her 40th birthday by having a tattoo of the band across her shoulders. Vicky Jones from Abercwmboi in the Cynon Valley underwent 16 hours under the needle having their four faces etched on. Vicky, a mother of four, has seen 300 Westlife concerts and counts herself as their greatest fan. She said: "My children reckon I’m crazy but the tattoos are fabulous. “All my money goes on Westlife - about £4,000 a year. I must be their biggest fan.” Singers Shane Filan, Nicky Byrne, Mark Feehily and Kian Egan added their autographs two months ago. She then had them inked over onto her back, underneath their portraits. Her daughter Stacey, 18, said: “I’m not that keen on Westlife at all. Mum’s too obsessed if you ask me.” Vicky’s husband Colin, 42, was also not a big fan. She admitted: “He can’t abide Westlife but he doesn’t say a lot.”

when she gets a restraining order against me :w00t:

It’s never healthy to be a Liverpool fan…maybe you should go and seek help?

It’s never healthy to be a Liverpool fan…maybe you should go and seek help? :Dquote]

You must be a Manc then?