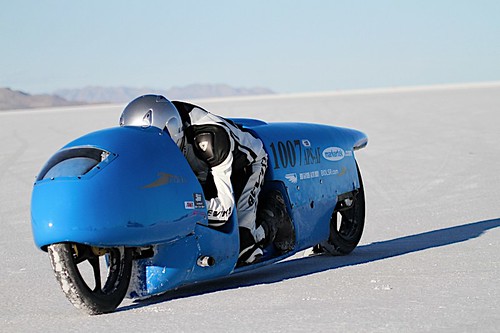 Kicking out 41bhp, this Honda RS125-powered streamliner just reached a two-way average speed of 146.77mph on the Bonneville Salt Flats, setting a new land speed record for the capacity. Also, don’t you just want to pick it up and cuddle it?

Scott Kolb was aiming for a 27-year-old record of 136.1mph. Previously Scott and the bike had reached 126mph in the unfaired category so he knew, with a little modification, an outright record should be possible.

The custom-framed land speed racer is equipped with radically altered geometry and a 98-inch wheelbase that allows the rider and engine to fit between the tiny wheels. According to Scott, the center of gravity is barely higher than the axles, something that’s helped by the hub-center steered front end. The Martin Eurosports-built 1996 Honda RS125 engine produces 41bhp at sea level, meaning power is probably reduced to about 36bhp in Utah.

To prepare for this attempt, the unfaired bike was stretched 40 inches, equipped with a radically streamlined fairing and water-to-water chillers replaced the un-aerodynamic radiator, which allowed the frontal area to be reduced by one square foot.

Scott reckons higher speeds should be possible with slightly taller gearing, to his surprise it felt like the bike could pull it, “I was in over-rev through the timed mile and could have geared for 155MPH if I had one more day of competition. Next
year!”

That’s not to say that everything went smoothly out on the salt during this year’s BUB speed trials. “Given the bike is a two stroke that is held wide open for over 75 seconds, every nut and bolt has to be either safety wired or given a generous helping
of loctite,” Scott tells us. “The hub center assembly in my haste to complete the bike did not get a generous helping of loctite and what you see is a bolt that had backed its way out.”

“So when I ran our first complete run which turned into a record breaking run
I heard a squeaking noise emanating from the front and thought a wheel
bearing was cooked which would have ended the week as the bearings are not
off the shelf. This would have sucked as we went 142 and I knew with a
little more gear I could gain 4-5 miles per hour. But it turned out to be a
loose screw and all was well and we thankfully did not have an accident due
to the screw rubbing on the swingarm. YIKES!!!”

“We put loctite on all the screws, geared a bit taller and had enough time to
run on the fifth day which is when I bumped our time to 146.77.”

holy sh1tballs! quite amazing for the record to stand for that long though