The Runner is grey and blue and it has the right bar end missin as that was stolen befor and it has a scorpian exhaust fitted very obvious sounds like a proper bike. very distinctive.Also he had the front middle pannel carbon fibre, the front mud guard carbon fibre and the side grills carbon fibre. Also his screen on the front was smoked Black.
Ive put pics of the exhaust and the bike which is exactly like his 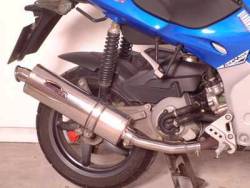 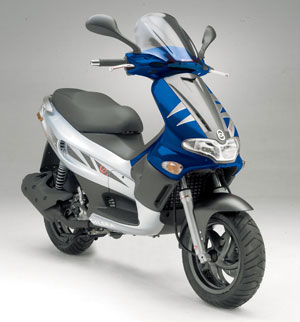 Sorry to here about your mates ped Trix, chances are he’ll never see it again

and as for the neighbours why would they/should they put themselves in danger for a bike they don’t own I know it sound harsh but the majority of bike thieves aren’t really bothered about hurting a few people that get in there way.

Yeah but they could of rang the police tho and gave the reg of the van, but oh well S**t happens.

I dont want to sound rude but atleast it wasn’t my bike.

Was it chained to anything ?

Spoke tha man! The gillera ones are an open invitation to thiefs. I had a Speedfight before the Aprilia and the kids used to go mental on it, now? I’m invisible! Spacially after I have fitted the Givi box… lol

He is a muppet he had it coming for him he has a garage and a side gate to his backgarden and he left it on his drive it only would of took him a minute more to but it round the back or in the garage also he has a datatool alarm n immob upgrade fitted but im guessin he got lazy and didn’t press one button! but the good thing the bike is datataged too so hopefully it’ll come back. but probably in pieces scratched to f**k and most probably a rite off.

Well lets hope he learns from this and all other bikers who dont lock and alarm.