The Brexit process has been a failure. At the end of two years, our ruling party is bitterly divided, the main opposition not a viable replacement for it, and the deal we have negotiated is almost universally opposed.
No one voted for this to happen.

We haven’t had a Brexit thread in a while.

Pre-referendum I was most impressed with the discussion on here, for the most part it was well-informed, rational and managed to remain civil. Bravo LondonBikers.

The same can not be said for some of the car forums I’m on. They descended into the worst type of nationalism and jingoism and had to be closed by the moderators before long. One of those forums, whom I won’t name, have recently reopened a Brexit thread and it’s interesting how much more circumspect and nuanced the comments have been.

The country has been on a three year learning experience.

I dont want a second referendum!

That is indeed what has happened.

Indeed, and as the 2016 vote was won on lies, giant whoppers of lies, with foreign interference and confirmed electoral illegalities, on a gerrymandered suffrage which excluded the 5 million most affected people, and was only an advisory vote anyway, and the last three years have unearthed many facts unknown in 2016, and now there is actually a deal on the table to vote on, yes, I want to vote again.

If the 2016 illegalities were uncovered in your local residents’ association vote it would be declared void and re-run, but because it was and advisory vote there is no way to void it. Funny how advisory then became cast-in-stone.

Brexit benefits no-one but the rich who are trying to avoid the new tax avoidance laws the EU are implementing. Every other excuse for it has been proven to be a lie.

Another referendum achieves nothing, those in power will still do whatever they want. 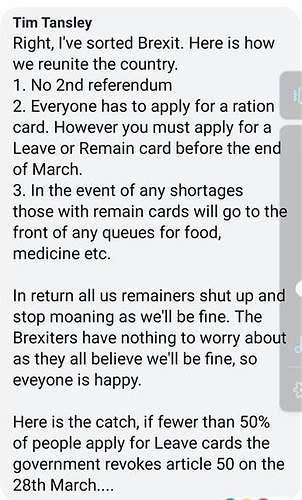 I don’t want a second referendum either. Is it possible to signed that poll in a negative manner?

We should start one.

I’m bored of it now, let’s just leave (or “crash out” if you watch the BBC) and deal with it.

Who would change their vote?

People who originally believed one of the Brexit promises that turned out to be a lie (£350 million a week for the NHS, “The day after we vote to leave, we hold all the cards and we can choose the path we want”)

People who didn’t bother to vote because they though it was a forgone conclusion/thought it didn’t matter.

People who were unable to vote 3 years ago because they were too young.

No doubt loads more arguments in both directions.

I’m bored of it now, let’s just leave (or “crash out” if you watch the BBC) and deal with it.

You can’t do that. It would:

You can not promote a policy where you know people will die.

If you are bored of it now, you need a second vote to kill it, otherwise you are going to be discussing this for the rest of your life.

Remember, leaving is the easy bit. The difficult bit will be establishing new trading relationships. CETA (the Canada deal) took a decade to agree. We would be looking at a generation of negotiations.

That will really bore you.

Who would change their vote?

The withdrawl act has already been ratified so we will be leaving , but…
if there were to be another remain or leave vote and it went the same way again would remainers accept it this time round ?

so we will be leaving