Just bought this exhaust off ebay… for £250, its Brand new boxed! What do ya think? I wanted the Carbon Fibre one but ended up with the SS, oh well. Will look good anyway. 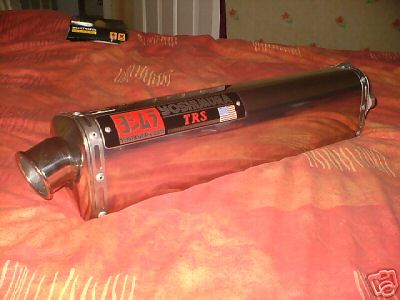 You wanted the CF one? Am I missing something or did you do a complete u-turn on your previous statements? hehehee… Either way, the new exhaust looks very nice! I’m sure you’re gagging to install it and start to terrify the neighbourhood. See you at the Ace sometime soon…

Nice. Get it fitted on yer bike.

Quality mate, good value for money for a yoshi! u be careful now!

lol, yea I know Jay! but I saw it on an R6 and it looks sooo nice… pic below. And the CF woulda matched my bike better considering my frame, swingarm is all black. Hopefully it will look as nice as the Yoshi does in the pic. Duno when I’ll be down the Ace next, but if your there I’ll see if I can spot ya… I can’t wait to get it on and leave my house at 6:30 in the morning, calls for some revving also just to piss the neighbours off 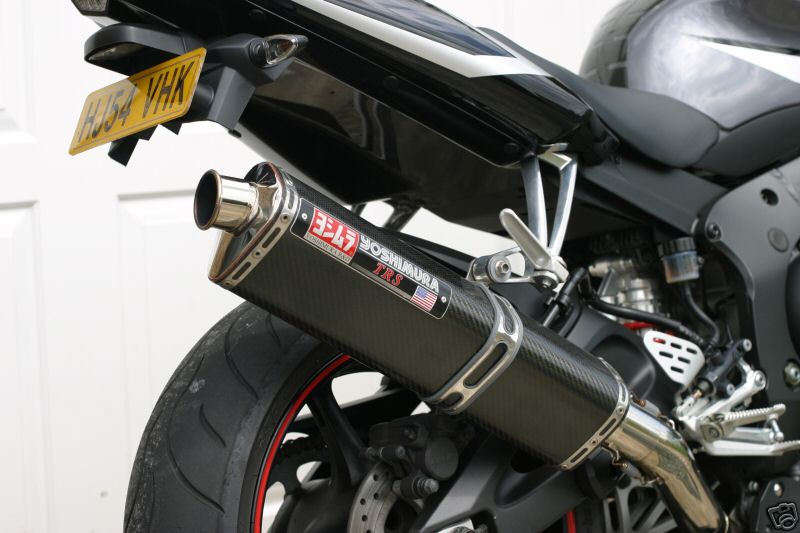 Brave man throwing £250 at Ebay. Well done. Get it sorted and come make some noise.

Why brave? I never had any problems with Ebay?

nice one mate look out for the cops haha

Good choice mate. i have a Yoshimura Hi Level full race stainless steel system on my GSXR. Its absolutely cracking and sounds great. Cost £519 plus i got a Power Commander with it for £175. Brand New. Ebay. The seller was a guy trading under the name of Sparxx Autos. Its all brand new, in the packaging. He imports them directly from the distributor in Japan.

Nice bike Yello! Not sure about your grips tho!

Yellow, do you ever get that bike dirty ??? evry time i see it mate it looks immaculate.

nice Can as well…

PS, yellow still got the HM Plant 1000rr with your name writen all over it.

Yea I know but there’s not many around on ebay and saw this one so thought I’d get it.

Cracking looking bike Yello, Ive never actually seen the SS on a bike with a black frame/swingarm before which was making me worried but seeing yours has eased that nerve. Definately looking forward to putting it on! Yours is the US version as well, what do you think about it, quality, sound and all?

Yea course Andrew, and now I’ve got 2bhp more I’ll be able to edge that much further when we’re playing on straights, lol

Gonna go back to Suzuki grips i think. Those Renthal’s are nice but just dont fit properly!.

The system fitted like a dream, i was expecting all sorts of problems but the most difficult bit was removing the original Suzuki part! Be careful of those bolts, they can round off. Made of cheese i think…

The full system simply slots together and is held by springs which allow some movement rather than be totally rigid. Its been the most effective mod ive done. It sounds fantastic, been told like a BSB superbike on the overrun

And improved a great machine no end. Ive fitted a PC3 too which is running a downloaded Yoshimura map for the minute. Been toying with the thought of a proper dyno setup but currently am more than pleased with the performance.Much smoother and the front goes pretty light in third gear which never happened before so im guessing a couple more horses. Did Brands Indy a few weeks back and past a standard 750 K4 and was keeping in front on the straights. The guy even asked whether mine was a 750 too! I was chuffed. For me, Yoshimura so far seems the most superior exhaust but im sure that others will disagree. I had thought about Arata also but the Yoshi just looked too good. Definately better bling wise…

I’ve had them on 3 bikes now and they are far better than standard ones. OK they dont fit as good, especially on the Gixxer but I like them