I normally park in my office carpark but due to a fire alarm and not allowed entry for an hour I decided to put in the bay on the street. It wasn’t secured to anything and kept with the other bikes. I was told by two members of LB that they spotted my bike, once at 14:20 in the bay and the other at 15:45 down St Thomas Hospital.

I’ve informed the police and got a useless person who wouldn’t start processing my claim until she was confident it wasn’t impounded. After I mentioned people had seen my bike she started to progress and wanted practically a GPS location of where it was last seen!! I drew her a map and even showed her on street view and she was still clueless. I was in there for almost 2 hours. Called the cops today and they’ve not reviewed the cctv footage as yet and are not aware of any cops reporting or sighting it at 15:45 yesterday.

Called the insurance broker last night and they didn’t have my details on their system when making a claim but whenever I called for my breakdown service that’s included with my insurance they always had my details on the system??? Anyways called my insurer today and they are starting the claim. They want to wait til Monday incase it gets recovered before processing it. I asked earlier but not possible and seems like this whole drama will take ages to unfold.

Gutted for you mate. Scumbags

Where was it parked? Was it secured?

Was parked on Embankment outside Savoy Hotel. Not secured to anything.

Sorry to hear that Raquib, hope they find those f#@kers and cut their balls off, i know violence solves nothing , but it make us feel better!

It be an easy bike to spot, so i keep my eyes peeled

This is what I saw.

The first part down Upper Marsh - not 100% but I think it’s accurate because the road next to it is a one way (not like that would stop them).

Black circle is where I’m aware there is a CCTV camera… whether or not it was facing the right way I don’t know.

Blue circle is where the coppers on push bikes were standing when this went on and they had already clocked on before I spoke to them. 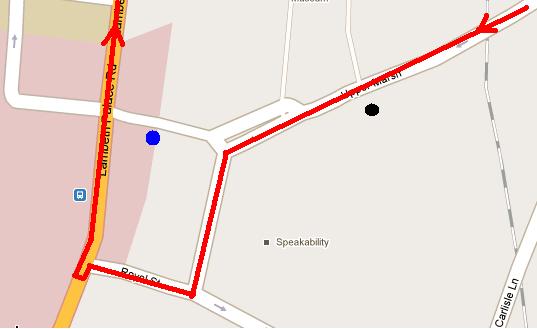 So sorry for your loss. Lovely looking bike.

Mine was stolen 2 weeks ago, and 2 other colleagues have been done in 5 weeks.

Regarding the insurance, they are all as bad as the thieves. Just be patient, it will be solved but the game they play is a long one and they will do nothing until you keep pestering them.

In the meantime, dig out ALL the info you can including V5, Insurance doc, and Insurance schedule, purchase receipt, service history and anything else you can find which is relevant. Then photocopy it all BEFORE you send it off.

Sorry to hear that Raquib, I hope its tracked down.

Sorry to hear this!

I must say though but hearing about the route this bike took there must be some chance of getting hold of some CCTV?

What incredibly bad luck, the only you weren’t parked in the office. Really sorry to hear about this, gobsmacked it happened in such a popular area, there must have been loads of people around

hey mr, so sorry to hear about this matey, having had my beautiful kwak nicked last May i am gutted for ya, hope the find it, but without sounding harsh, i wouldnt get your hopes up.

Thanks everyone for their wishes. Horrible feeling having something taken from you that you’re attached too. I am not holding my breath that it’ll be recovered or that I’ll see any justice against the culprits. Raging and feeling helpless to fix it.

Not recovered as the cops are too lazy to look at the cctv footage as yet. I’m calling them daily…

So sorry to read this raq, it’s a horrible feeling…

I think the worst part is no one seems to give a [email protected]*% ? it’s low level crime the police don’t seem to care about and the insurance companies take months to organise anything…

I see this everyday at work, we even had an s1000rr taken from outside the showroom in broad daylight, it’s pretty amazing what they get away with…

Had a 150 mile old gs adventure turn up this week, it was already in 20 pieces wraped in black plastic, customs got it in the hold of a coach at folkstone!!

Think bike is gone and no getting it back. Cops have been useless in this instance as they have still to review the cctv footage!

Sorry to hear about the bike mate , I got same bike as you know and little while back where I parked my bike at work it wasn’t covered up so these 2 guys on another r6 came up to my bike one with a screwdriver standing next to my bike… when I confronted him his reply was “I always carry one with me” then he went off , since then I brought a bike cover and a chain , got a disc lock and alarm on it and there are security cameras where I work , So I feel a lot more reassured when I’m at work , the only 2 places a bike is safe is at home and work other then that I don’t like taking the bike anywhere else.

gutted for you, hope they find it…