So we decided to have a long weekend exploring Yorkshire and booked a hotel in Leeds. First day was great up to Whitby to see the goths and back across the moors.

While we were changing in our hotel room, Sue noticed a rider and pillion in the car park outside our window and for once her paranoia was justified. They met up with a bloke on a moped with no helmet and I ran from the room down the corridor down the stairs. By the time I got to reception they were riding off. The Xena disc lock withstood three mighty whacks with a hammer and the bike was undamaged. 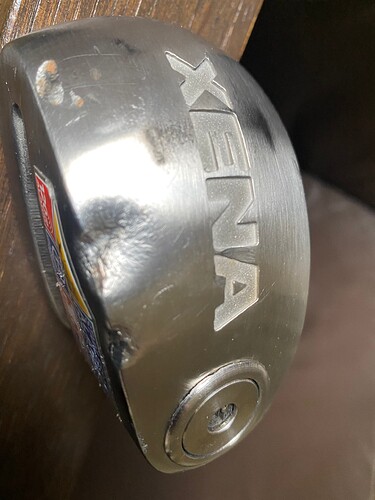 We decided not to wait for them to come back with an angle grinder, cut our losses and come straight home. We wouldn’t have been able to sleep with no way of protecting the bike so they stole two nights of our weekend - but at least we were not stranded in Leeds.

I know they were amateurs - who else would go after a Bandit - but I’m pleased that the Xena held up. I’ll get another for the other disc I think

Glad to hear in protected your bike, sorry to hear it ruined your weekend. Scum.

Blimey! that was a close call. What time of day was that?

Either way, pleased you still have the pride and joy.

This happened around 5 o’clock on Saturday afternoon in Colton Mill Retail Park. They just don’t care who is around or watching. But Xena stayed strong

I’m surprised and happy the disc didn’t get damaged. Sorry you had to cancel two days.

The ZENA 14XX is my weapon of choice for disc locks, never had mine attacked though, probably because The 250 is usually the most used and abused motorcycle in the car park. Did the alarm go off? Or are you like me, I leave the battery out because of too many false alarms. If I was a gambling man I’d wager the Bandit was targetted specifically by someone looking for a Bandit, possible as a donor and yours happened to be in a very good clean condition, they probably followed you back to the hotel and rang the third scrote when you parked up.

The more the merrier, In 2018 I stayed at the Pontefract Travelodge, not too far from Leeds, there was a lad in the car park with a chain through the rear wheel and two disc locks on the front, when I commented to the lad he said “welcome to Leeds”

The alarm went off but apparently not on the first strike. I’ve never had a problem with the alarm and, if I did, I think Xena will swap the module for free. I’ll get another for the other disc that will be harder to get a hammer to. And a padlock hidden on the rear disc just to screw with their minds if they manage to get the front two off. If they followed us, they hung around for 20 mins while I had a cuppa. If they had left it another five minutes I would have been walking to the shops.

Maybe someone tipped them off. The criminal element are everywhere.

I have quite taken to https://www.amazon.co.uk/GRANIT-Sledg-77-web-yellow/dp/B003EIJMF4/ there isn’t much to hit with a hammer as the man body is on the inside.

Leeds is full of scunters.

Thanks. I’ve had a look at upgrading but unfortunately there ain’t a lot of room under a bandit seat these days. I know I can get a second Xena in the peculiarly-shaped limited space, so I’ve ordered another. Two alarmed locks on two discs will give me enough confidence to go on more weekends away in the future.

Of course. the most important security measure I can take is to avoid Leeds altogether.

16 mm thick locking bolt made of hardened steel.
integrated electronic warning system,
the size of it makes it very hard for an angle grinder & a ball joint seperater wont budge it

It’s impressive, but ultimately it didn’t deter the scrotes here, they just cut the disc off instead.

Thanks. I did look at this but I think the size is wrong for the space I have. I’m hoping my deuce of xenas will match your abus.

We were expecting them to come back with an angle grinder so we just left Leeds behind and came back to safe old London(!).

This is why I’m going for two xenas - make them cut two discs (and then find my little padlock on the back).

Of course, they could turn up with a van - but they will need a tail lift because the bandit weighs as much as a small moon.

The abus is what I (still!) have. They cut a one inch section out of the disc and just slid it off. Alarm probably didn’t even activate! Saw cctv from the office today and it took exactly 2 minutes. I think it was spotted somehow as walked car park today and very hard to see from the road. Also the way they pull in is like they knew where it was. Lastly forgot to add that after recovery on Fri as i was leaving area two scrotes two up on a bike with no plate flew past. Definitely watched!

I’m very sorry to hear about other people’s losses.

I’m going to keep on biking until they get it - but I do feel I’ve dodged something nasty this time and I’ll celebrate any little victories that come my way.

Sorry to hear that you’ve had this experience, really ruins the enjoyment.

Cheers, mate. We lost a couple of nights away - but we didn’t lose the Bandit. We got out to the Cotswold again yesterday and we’ll get away for another long weekend soon - but not in Leeds.

That has always been my approach. Make it more of a pain to nick and they will probably go for an easier target.