woot the fook!!! its about 6inc deep outside my house!! god knows how im going to get the car out!!(its on a steep hill)mind you it may well have slid down the road by the time i get to it!!!

I dont think ill be going to work today as it still snowing outside, not risking taking the car or the bike today and i recon my kids school will not open today. So walk to the park and have a huge snowball fight.

Im out there on patrol…

Passed a guy this morning toootling along in the snow with both feet acting as stabilisers … bave but what else can you do when you need to use the bike…?

Its great fun in a cage in this weather, shame the rest of the cage drivers feel the need to drive at 10mph I had my car side ways 3 times this moring its like having a Subara Impreza in slow motion this is the only time I ever prat about in cars.

Got to the train station… waited around for ages for ‘delayed’ trains… then it was announced they were all cancelled! Yipee!!

http://thelondonbiker.com/blog if you want to see the photos!

Stay at home everyone FFS.

It’s a day at work, for most of you’re only gonna make someone else rich. Is it worth it?

With this scene outside my door, I popped the coffee on and got a book out to read. My boss texted me at 7 to say ‘stay in bed, mate, no point getting up’. Nice bloke, eh?

And it is now snowing heavily again. No ta, this is not biking weather up here in Milton Keynes… 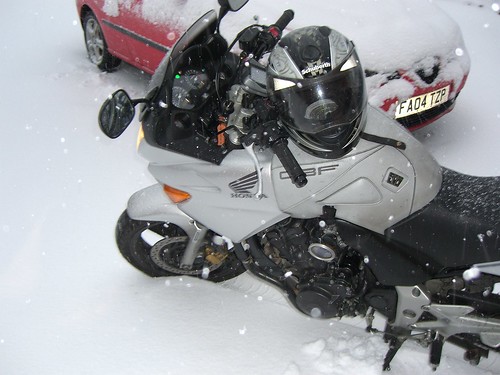 I kicked the kids out to school only to have one come back home 10 minutes later, his school’s shut… the other one wont be happy when she get’s home lol

Even the dogs wondering what the hecks going on;

Rode in, no problem. Roads are nice and empty in West London, a real treat.

Actually, I quite like it in white! … and if only the seat padding was that thick, really to suit my aged bones…

nah, sod that. looked out front and snow/slush everywhere, and snow still falling.

bike stayed where it was…grit free

I had a warm safe journey in my car

got to work about 45 mins late, i was out in the cold for nearly two hours for what is normally a 40 min trip. saw some sights tho, on bromley road in catford a driver had some how managed to flip the car onto its side on the footpath, and apparently a bus had wedged itself under the bridge at lower sydenham.

so after a long detour around catford i finally got into town. going along farringdon road the bike parks were devoid of anything but scooters.

glad to say i got to work without even a wobble

to all the other brave souls that ventured out this morning i hope you all stayed safe, i should have stayed in bed

i got the car out and had checked the internet and radio for school closeures!! all said there schools were open??? so me being me decided to phnoe them instead!!
so half way down mount everest(well thats wat it seemed like) boss rang!! schools rang!! all closed!! yippeyyy!! so hit the big hill in the park got out the bin bags and away we go!!!yeeehaa
now totaly frozen and wet!! lovely!!!

isnt there some stupid drivers out there
think they all need a lesson in how to drive in the snow!!!HAVE FUN U LOT AND BE CAREFUL!!!

This is the view from our workshop

This is the first chance I got to get near the computer !..hello Gina !

I’ve just got back from a very snowy Manchester - Loads more snow up there. Can’t believe that I managed to make it back today!