Going home this evening, a chap parked on the right pulled out across my lane as I came into sunray avenue, denmark hill way.

Lost the front. Bike went past and into the front of a parked car on the left and I folded myself round the passenger side bumper corner of the car that pulled out.

Right in the nuts. (they are ok thanks, I’ve had a good rummage)

Not a scratch on the car that pulled out , I got pics before he moved it and there was a bike behind me that stopped and is a witness. Police also called as my left ankle and knee swelled up etc.

I’ll put them up later, if thats a bad idea for legal reason plesae let me know.

A very nice man a couple or doors down is a biker and took my banged up baby into his garage. Thanks Simon!

Anyway I’ll have a read through of the posts on insurance and ask if I’ve got any questions.

Bit confused about the deal with the insurance chap at bennets wanting to pass me through so someone who was going to talk about hirebikes etc Sounds dodgy and not part of the insurance claim process. Any info on this?

If I hadnt of had armour in the jacket and the big knee armour in the dainese my shoulders/elbow and especially the knee would be fucked. I’ll be getting proper boots rather than the daytona journey booties, I want more ankle support/protection. The enforcer gloves also did a good job.

Thanks to all the bikers who slowed down and asked if I was ok and to the doctors on their way home from the hossy who stopped and asked if their help was needed.

Oh man that’s exactly what happened to me last month! Gutted it happened but your ok and it’s all repairable I hope your claim is sorted quick as alot take atleast a year unless your fully comp.

Youll feel it in the morning.

The people you want are http://www.dunneandgray.co.uk/index.html

Is the car driver fully liable?

Who whipped it out, and did anyone get a photo?

Who whipped it out, and did anyone get a photo?

OK I spotted it, nothing got whiped out. It was the high of being alive ruining my spellzing

Hasting did the same thing, passed me over to help hire, they sorted out a loan bike and call ed the 3rd party straight away whilst i was on the phone, the 3rd they admitted fault all recorded. so i dont need to pay a penny. Sometimes people talk to friends etc and the story changes. Then I got a call from the claim people who the company put me through, but for the following week claims people kept calling and started of like i had already spoken to them so be careful.

main thing is that ur not to bad.

glad to know you’re okay. it’s never nice to hear of a fellow LB’er getting pranged.

glad to know you’re okay. it’s never nice to hear of a fellow LB’er getting pranged.

Soz guys this post was me. I was logged as david.v after signing up a mate to LB.

came out lucky there, now get well asap

Could have been a hell of a lot worse, get well soon

Thanks for all the reply.

Its never nice going from fun to splat.

I remember sliding along the floor, thinking I could some how aim for where I was going. But at the same time wincing at the scraping sound of my bike on the road and the little flash of thinking “****!”, as I heard it hit something else.

But I’m OK, theres a witness, the bloke who pulled out /turn in front wasnt a twat- just made a mistake. Being able to wheel the bike into someones garage took a massive load of and I had the right money for a cab.

Called the docs and they say I’ve got to go get checked at the hossy as they wont look at me until I’ve been there so I’ll charge up the kindle and get on my way.

The bikes behind the blurry fella walking past. 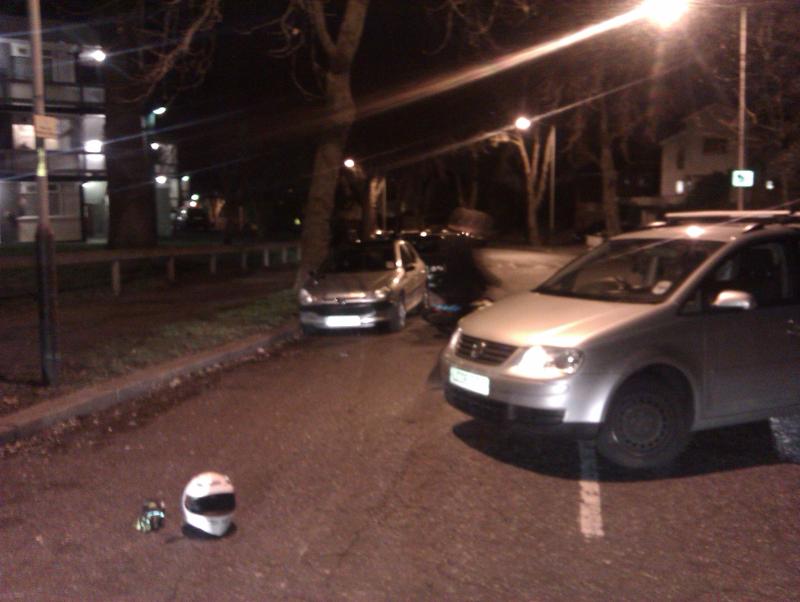 Glad to hear you seem to be alright, and highlights the importance of wearing good kit. If you are looking for better boots, I recently crashtested some Alpinestars SMX-R at 30 mph and they’re still good to go, if a little scuffed.

Also nice to hear passers by helped and stopped, and well done to the guy looking after your bike. When I crashed recently my worry was “how am I going to get the bike home?”

Glad your OK mate and hope the bike isn’t too bad!

glad your leathers ect made the difference,they did when i had my off

sad news good you ok, hope it all gets sorted for you.

sorry to here mate hope u get payed out etc.