Would love to sort out a camper van and be able to get the bike along too. Imagine heading off the Wales / Scotland and being able to wild camp, go out for a blast, cook some grub, get yer head down - repeat all week. And if it’s raining, keep dry in the van.

Don’t like the idea of a trailer with my heavy bike. Same for those things that sit on a tow bar (max weight 175Kgish too)

Don’t want a van too big, most race vans with garages seem to be Sprinters.

I’ve even checked out a pickup truck - but the length of the pickup is too short for double cabs.

Any creative thinkers got a solution / idea?

If you’re doing the distance & luggage carrying work in the van, maybe just have a smaller bike for blasting around the the local twisties when you arrive? Then you just need a smaller van that you can fold down a bed in, once the bike’s out.

My brother has far a lwb transit (shorter then you think) with the intention of this. Not built yet, but plan is:

Bike in the back, bed above it on cables and a winch to adjust height.
Basic kitchen stuff behind drivers seat
Swivel chairs in the front and no bulkhead

It’ll be a squeeze to sleep with the bike inside but workable, take the bike out and theses room to spare

Personally I’d want a van I can stand up in, also get a decent length bed in too.
You’ll be ok being a short arse and should be able to sleep across the van

As Pat says, if you’re using the van for long distances a lighter bike for razing around would make sense, also if you get a Speed Triple that’ll be shorter than your current bike.

Mercedes Sprinters are good for head height. Guy Martin (I don’t like him) doses down in a van next to his bike all the time. I don’t think he makes many provisions other than a sleeping bag though

If you looking at a transit, size matters, transit custom short wheel base standard roof hight, you maybe have to take of the top box, honda vfr crossrunner is worse, top box and screen of. Personally I would go down the trailer route, its a lot easier. Oh and putting a heavy bike in a van would be harder than putting it on a bike trailer. I put my VFR800 sport tourer in my van when we go on holiday but dont sleep in the van. It is a lot lighter than a triumph sprint GT that I used to have, but you still have to be carefall putting it in the van.

I’d opt for a trailer too.

Martin Gibson took his landcruiser to the tow bar people and had them fit a custom rack to the chassis rails that would take the weight of his ktm 990.

ex AA or RAC transit with the CRT/VRS still in ( the fold out recovery dolly ) with motorcycle attachments.
you then still have room in the load space for creating a living area and then have a side awning attached as well

Don’t know if these are safe to use.

What is CRT, VRS?

What are people’s thoughts? Could just throw a blow up bed and/or a hammock in the back?

Doubt the rear load space is deep enough to fit your bike in, or if there’s even enough headroom to load it.

Yeah, maybe a baby Renault van then. What I like about WAVs is they will have been driven well (got precious cargo in them) and are generally low mileage.

Have a look at the transit connect. They did swb and lwb. And a higher roof version.

Ha ha ha I just did this at start off June sort off,started with a track day at Cadwell park camping there with the van and bike,then onto Peak District then onto Lake District.
Trying to do it on a budget so just used my trackday van ,put leisure battery in bought electric cool box,240 v hook wired in so if crap weather can go in campsite plug in and have heater.
This was just a little 4 to 5 day test to see how it went,loved it Lake District is so beautiful even got into a bit of walking/hiking.
Couldn’t actually go out on bike as no mot/lights…but was great having van arriving at base of walk making quick coffee and then setting of up into the hills.
Oh for a bed I have a fishing fold out bed couple off hundred quid as comfortable as you like.
It’s difficult to fit out van interior if you want to carry bike,there is some great awnings available that strap onto side of van and open up to 3 m tents.
Trying to plan another trip now. 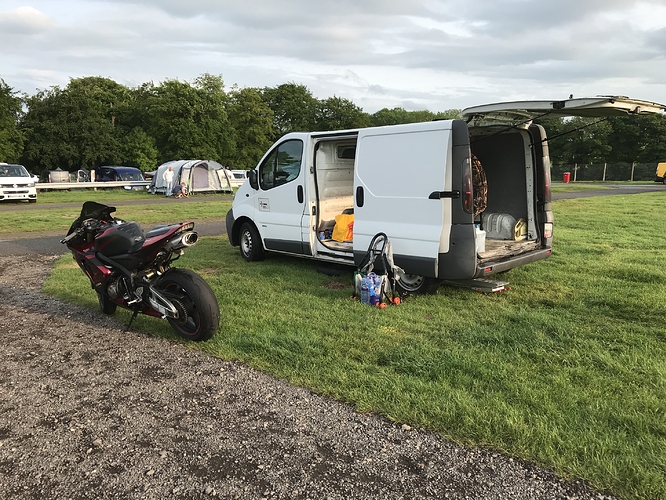 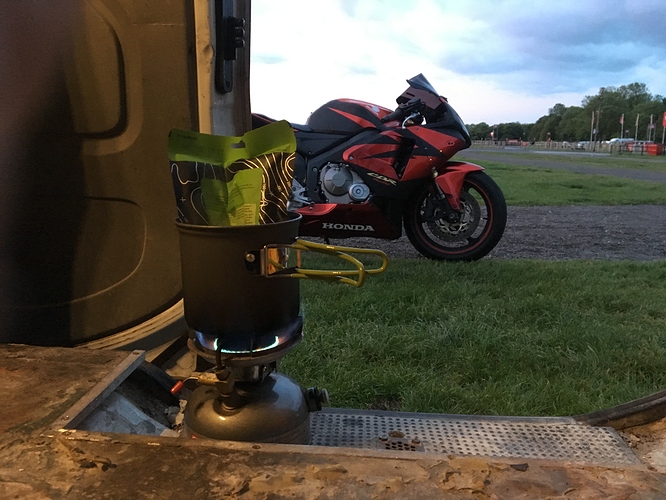 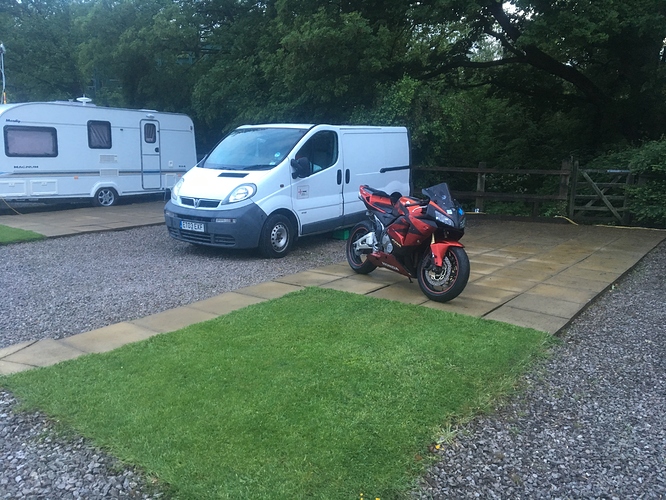 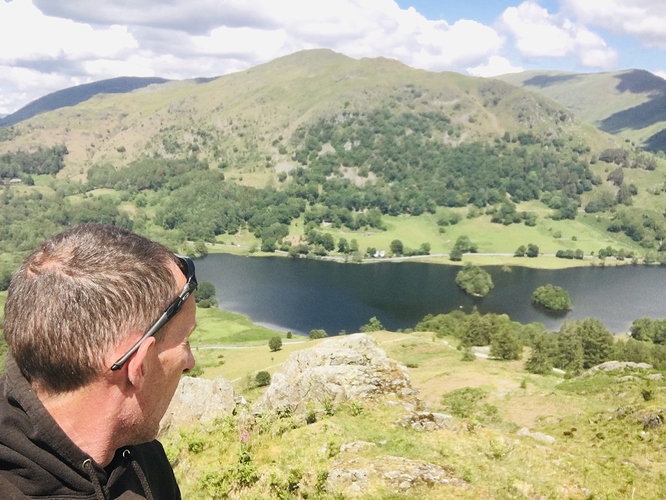 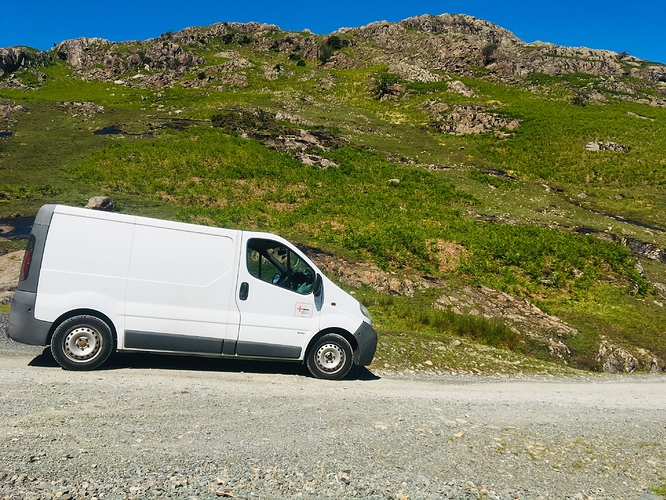 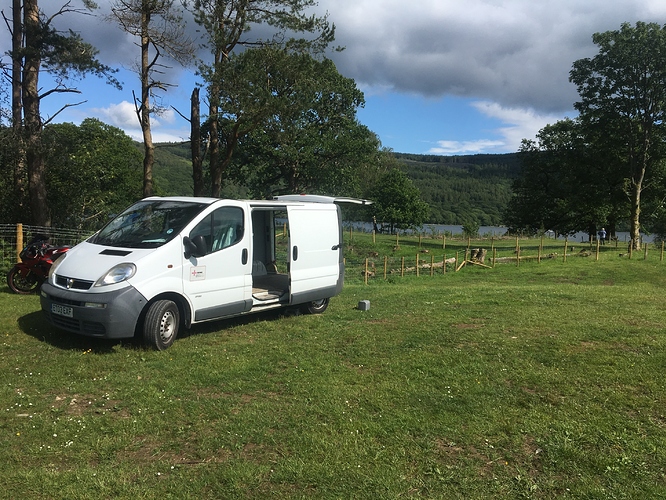 My courier Accelerstion Motorcycle Services had one of these. Enough room to swing a cat. 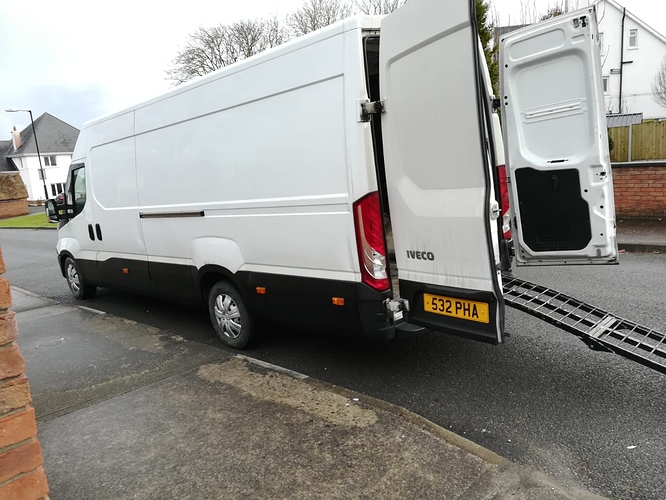 That’s pretty much want exactly I’d like to do

I think it’s down to technique. The chap who loaded my bike wasn’t a big guy. I wasn’t there but, he just took a run up apparently.