What other hobbies have you got? Got any pictures too?

Asides from biking what other hobbies have you got? Mine is guitars have been playing the guitar for about 6 years now and trying to start up a band. Have a look at my babies (attached)they are the next pride and joy after my bike.

What are your hobbies?

Oh yeah sorry about the awful pic my digi camera is toilet and unless you have a 1000000watts of light it comes out ****e! 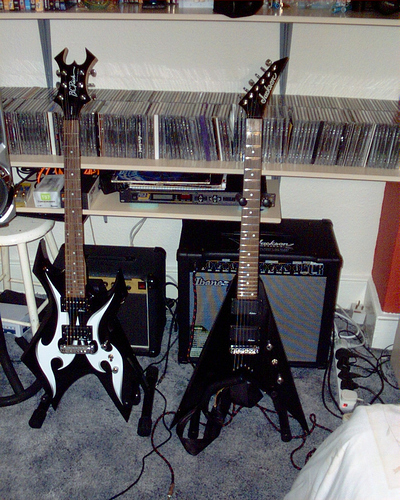 Me Warmoth Gecko 5 String (I built it from pieces!)

The band looks pretty good wherever you were playing looked big. Wat sort of music you into?

I think you can tell by the guitars that I have that I am in rock and heavy metal lol.

Cheers dude…
I play everything and anything lol… those pics are from my Pink Floyd Trib band… The top one is from a festival we headlined… it was awesome… 5000 people looking at me! makes you forget loads of words!! lol
The one underneath was from TT week at the Venue with about 2000 peeps…
I play in about 4 bands… doing Floyd, Rock(AC/DC trib band guitarist), Ska/TwoTone/Reggae(playing bass) and play bass in a live dance/breakbeat/instrumental band.

I grew up playing metal… Iron Maiden/Sabbath/Guns 'n Roses… Love it. My two vices in life cost me a fortune… guitars and bikes!

Yeah that would be cool would like to hear it. Dome guitar lessons would be good too lol even though I have been playing ages I am still ****e!

frettastic,me to I am a little plucker aswell

this a piccie of my old stuff

this is a piccie of my new stuff.(guitar)

Oh and me other old stuff.

Now all we have to do is find a studio!

Floyd you can teach me some AC/DC cause I have never been able to play it!

We need to have a stage prop like an Eddie from maiden but only something for us?

Do we have any megadeath fans on here also?

Aren’t we forgetting something here…!!! GROUPIES!!! It’s kinda a deal breaker on me rider these days!

Ohh and the first person to suggest doing “Born to be Wild” is sacked!

A wise man once told me…" Some drugs are good, some are bad… but some are f***ing amazing!"

Like the sound of your pc! I want one of those my pc is too rubbish to do that sort of thing with :0(

I use survival studios in acton don’t know if you have heard of em. Have used them for years. They are run down but have a drum kit pa and all the amps you need and a room is £21 for 3 hours and thats all in. I have been teaching a mate guitar now for a year and my brother comes down to the studio to drum and do a bit of singing. We have only been there a few times so we are ****e! Me and my mate have got 4 songs of our own but we have decided to do covers now. Doing Enter sandman at the moment, for whom the bell tolls, Nowhere by Therapy, When I come around by Greenday, Whats my age again by Blink, Paranoid by the sabbath. I aint happy about the greenday stuff to much but it works and people like it if you play pubs. If we ever get that far lol

On a serious note though if anyone wants to get together just for a laugh let me know I am happy to learn anything as long as it’s easy! Easy and catchy is the way!

Groupies mmmmmmmmmmmmmmmm little rock chicks. keep seeing more and more cute girls whenever I go to the Astoria to see bands. I remember back in the day when I was 12 lol(10 years ago) when I used to go to gigs with my brothers there never used to be any women!

Mate sounds like you have the best job you lucky bassa!

Hey I am unemployed at the mo couldn’t sneak me in on the payrole could you? :0)

Wow sounds like you have had an interesting time you lucky git.

Oh yeah I used to go to the computer fair haven’t been for ages!

I have actually just brought a new pc but not sure if it would be ok to do a little light recording on:

A cheap one though!

Intel celeron 2.66ghz processor
with 256 mb ddr ram.
80Gb hardisk
Biggest problem - has an integrated sound card sounds cool play cd’s etc
the soundcard does have mic input though could I get away with it?

Software would be good! One that I would could record my guitar and add drums too etc.

Its always such a pisser living so far from the real world… Would love to have a beer with you guys… (diet coke… I dont really drink)… I only play my main bands for the larger events now… I kinda flunked out of school dreaming of being a rock star and it just never clicked… and then I learnt to play and did the uni circuits with the Floyd Trib and various clubs around the UK. Its weird but out of all the things we’ve done and been… my most prized possesion is me scrap book…

zx6rj2-yellow, back stage is fun… but it can get pretty samey after a while… loads of gigs we’ve had to share the dressing room with strippers and all sorts… and when there bent over painting their nails in the buff its not long before yuo get comfory with the whole situation. We did a support slot for the Fun Lovin’ Crims who were good fun… and Saxon… my god, there a biker band! lol… I did well this year, one of the dance/lap dancers at the club we played at this TT, gave me her mobile number and we went out a few times while she was over… Theres me and her… and she’s brought the girls(dancers) shes over with along as well… I’m kinda looking like their pimp most the night!.. and the fight in the dressing room when I said she could dance on stage to one of our songs…4 angry strippers wanting to know why she was the only one doing it…

I use a PC and Mac for home recording stuff and the guitarist in the band runs a full digital studio… I’m actually pretty **** in teh studio… 43 take Pete… lol… much prefer live playing.

Mananged to blow up two JCM 900 at this years TT as well… one was in the middle of “For those about to rock”… and then suddenly it came back to life for 10 seconds on the last chord… real Spinal Tap moment!

Sounds like you guys are pretty hardcore. It’s funny when I go to the studios that I use I walk past all the other rooms and you can hear all these wicked bands playing. I dread to think what people say when they walk past out room and hear us playing lol.

Hang on you shared a dressing room with a load of ladies in the buff? How could you ever get used to that. There is a deffinate need for me to join up with some wicked band and get in on the scene!

It does man… lol… it is good fun like… but the 5year old holding a crayon grin wears off after a bit… specially when “If you spill anymore baby lotion on my guitar I’ll burn that ****ing gstring!!”

each one takes about 2 or 3 weeks to paint and put together, the chains are the hardest part as the links come seperately so ya have to build the chain, i’ve got a few old bikes aswell, they are the nicer ones to build coz you can see the engine so can see the effort that has gone into it as apposed to putting a fairing on it and hiding the work thats gone into building the engine up

Very nice Stephen! I believe Cezar has recently been taken-in by knives and swords as well.

Mate those models are wicked. I want to start building them but I just end up getting glue all over them and they look pants! They are expensive too!