I am planning on going bike hunting this week to get a bike as quickly as possible or I will end up spending my money on something irrelevant.

Where have most people got their bikes from and what should I look for? Are there any particular guidelines? I am looking for a Suzuki SV650 as a first bike in London. I think

Sv, Bandit, FZ6, Hornet or Monster would all make great first bikes round town. Pick A jap bike with a warrenty and you cannot go wrong. I’d love to reccomend the shop that I work in as it’s great but thats not what this place is all about.

Erm thanks Turd. But I do need someone to recommend a few places in the London area because it would sort of defeat the object if you didnt. Ahem you couldnt tell me where you work in code

or recommend a specific place could you??

It makes more sense to get a used bike and not a new one doesnt it!

From what I’ve heard there isn’t that much in it between the older curvey shape and the newer pointy one, it’s mainly down to preference. In terms of half faired (SVS) vs naked, they both do most stuff fairly well, but if you’re likely to do much motorway/sportier riding then the former has the edge.

SVs are often used by relatively new riders so worth checking for crash damage, but aside from that they’re reasonably reliable so from a dealer it’s mainly a case for looking at the usual stuff like service history and condition (the finish isn’t brilliant so tends to go off a bit if the bike is used all year round). Also go armed with info about what price to pay for a given age & condition bike to help use as a bargaining tool! Try: http://www.parkers.co.uk/pricing/used_bike/

Can’t recommend a dealer personally, but you could try the ‘name & shame’ section of the forum.

good luck with finding yourself a bike!

The fuel injected SV, thats K3 onwards is easier to une than the carbed model and can give more grunt. Parts for either are not a problem but I personally would go for as new as possible.

As for where to get one, if going to a garage try Steve Jordan Motorcycles out in Bookham (near BoxHill) or Wheelpower in Raynes Park. There are probably be plenty of others but I know both of those will accomodate you for an SV or perhaps even something else.

I say Monster, just look at it, you know you want it 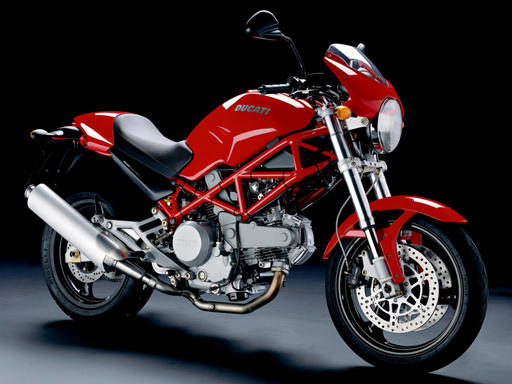 I’d say punt about on a few of the dealers web sites to get a feel for whats about at what price. The likes of Doble’s have half decent sites. That way you’ll save a lot of wasted leg work and time…all IMHO

Papa’s been shining his Monster especially for summer

Gee… I am not a big red fan but the Monster does look nice I have to admit. Think will browse sites as suggested.

It also comes in black, but red is faster.

Nah go for a jap bike. Look just as good, more reliable and a damn site cheaper to buy too

As for an Sv they are doing such great deals on new ones its hardly worth buying second hand for example Colin Colins in Letchworth:

Colin Colins in Harrow are doing new faired SVs for £4399.

My girlfriend has been looking around for an SV and we have discovered that older models with about 10,000 miles on owners want 3k plus and thats for like an 03 plate so buying second hand just isnt worth it really.

Personally I’d go Hornet for a longer lasting smile, a much better build quality and general higher standard of components. And the faired ones aren’t so popular and should be a decent price.

Then a late model Fazer (rather than the new injected model) followed by the SV.

My feelings are that the SV always looks like it corrodes more than the others mentioned, but of course this is as much down to the owner as the bike. That aside it is a very competent machine, no doubts there.

dont think sv corrodes more or less than any other

, think a lot of them get used rain or shine?

at the end of the day if you can get a brand new bike, you know its got a proper warranty and all parts such as tyres, brakes, chain etc are all brand new so should be less to worry about, and if anything does go wrong you wont have to pay for it anyway…

2nd hand bikes can be a nightmare for the un-initiated, and are almost always buyer beware, or crap limited insurance warranty rather than manafacturers full warranty, also if buying from a shop you should be able to get some kit or alarm etc thrown in if you ask nicely

The Hornet is great. Took one out last summer but just prefered the position, oh er misses, on the Monster.

But they’re underpowered unreliable examples of spares bin engineering regardless of the colour.

Always thought it was funny that Ducati electrics are reliably used on a lot of scooters but they have to buy in crap for the bikes.

‘Oh they have such character’ say the Ducatisti. No, just a good ad campaign.

Never had a problem with mine … yet

To be fair, of all the Ducatisti I know I have only ever heard of 1 lemon, and that was ironically a Paul Smart

Underpowered? Well it depends what you want doesn’t it? I guess they are a bit like Apple Macs, you either love them or you don’t

Generators fall off and go through the engines.

used to service them