What bike would you ride around the world?

I’ve wanted to ride across the world ever since I realised I wanted a motorbike, reinforced by watching the Long Way series (though not the most recent) then more recently with Lyndon Poskitt and also TeapotOne.

Surely there are other examples, and clearly you can probably ride just about anything if you want to enough and perhaps make some concessions on routes.

Probably the time for reflection this last year has given us all it’s been at the forefront of my mind again.

I have a 60k mile GTR1400. I feel like I probably could do most things with it. Poor condition, paved once upon a time roads would probably be fine. It provides all day comfort and can carry lots of stuff. Large service intervals, not disgusting fuel economy. A delicate fuel pump, which I’ve rebuilt and replaced once in my less than year’s ownership, which would not fare well on the watered down fuel sold out of old water bottles I’ve experienced on previous travels.

If I could work out a way to remote work and ride at the same time, I think I’d look to do this as soon as the pandemic clears or shortly after.

My old TDM would have been truly great for this, and I invested in a full kit wanker globetrotter style set up for it, then sold it for parts

Q. What would you take?

TDM900 that would have been interesting.

Of all the bikes now I’d be looking at:

Both will be excellent if expensive bikes that are out in 2021, if looking at 2020 bikes then:

If you are looking at lots of off road then

Looking at some Japanese and budget then:

I’d go for an older gen Africa twin. All the newer bikes have too many electronic aids that can go wrong, and being a honda should last for miles

@Kevsta would you consider riding a used bike? If I were to go for a different bike, probably the first thing I’d filter by is price, maybe with a £3k limit (number plucked out of the air, can’t seem to buy as much for £2k these days as you could a few years back).

What these suggestions all have in common is they are all adventure bikes, minimum 19" front, 18" rear iirc - would you both say this is the first thing you’d use to filter the bikes by?

If you’re looking at that price range and second hand:

Both have been well used by people travelling the world, Japanese, both model recently discontinued (last 5 years), so plenty of choice and customisation available.

2021 Kawasaki Versys SE Grand Tourer with the Skyhook suspension. Nice and comfy on those rough roads, and reliable.

That’s a lot of bike to be picking up, and it would only really be good on tarmac.

I am happily married have you know!

I’d be tempted to consider a CB500 because they are easy to fix and you should be able to get parts or botch them in far away places.

That said there is that nut job that has done several round the world runs on an R1 and another YouTuber that does it on a Ducati. The Ducati rider rated reliability as your ability to fix it should it break rather than whether it actually breaks.

Sailing enthusiasts do a course on how to fix their Volvo Pentas before they set off on long excursions so it might be worth practicing some maintenance before setting off.

That is a really interesting though, and it is not the first time that I have come across that metric. Recently was a YouTube video on the over all reliability of cars sold in the UK, and they work out the Reliability Index of manufacturer based upon the age of the car when it had a fault, the severity of the fault, frequency of faults and the cost to fix.

This resulted in Fiat having one of the highest reliability indexes, partly because to actually fix issues was incredibly cheap.

Also while I can rebuild an engine and do most things mechanically, I do really dislike doing it. One thing that struck me when watching Racing to Places was how crap I thought the reliability of his KTM was (shock to nobody). I know he had some kind of relationship with them so couldn’t really put them on blast but iirc he suffered from something buttery - crankshaft I think, and constant burn out from reg/rec or alternator. I’d definitely lose enjoyment if I had to deal with things like that on a semi-regular basis. I’m also familiar with the feeling of sitting on the drive on a freezing night in January at 2am trying to get the bike fixed ready for work the next morning, so again if it’s unavoidable I’ll do it. I’ve read of GTR owners who have got 300k miles out of their bikes with little in the way of major problems - this is something that draws me to it as a good candidate.

The ease of access, simplicity and reliablity of the single cylinder xt660 however probably is an even better candidate on this basis.

One thing (apart from inability to travel on sandy roads) that is putting me off taking the gtr is the fairings and how tucked away everything is. Fortunately I’ve not had to do anything to it really yet except the fuel pump twice (inside the tank from underside). When I do get into it, I can well imagine I’m going to hate it. 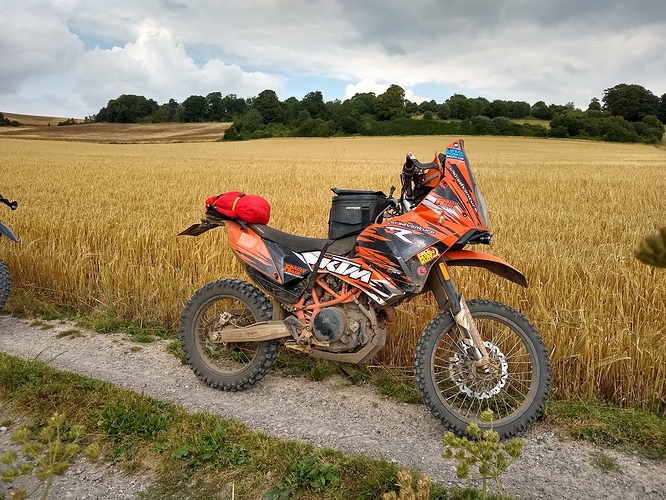 The main thing for me to consider is how you want to go round the world. Is it city to city, staying on tarmac or exploring and finding hidden gems. Different bikes better for different things.

I’d choose a bike without fairings if possible for ease of access when things go wrong.

If all else fails, buy a c50/70/90 and carry journey on on that… They’re bullet proof and you can fix with household materials. Just don’t go up too many steep hills if fully loaded

Conventional answer is take the bike you already own.

Otherwise it all depends on budget. A newer bike should have less issues but may cost a lot to buy and will be expensive for a carnet de passage.

If an older bike I’d take an xtz660 ( my previous fave bike), a modern Africa Twin or most appropriately a Honda Goldwing for comfort over long distance. Dare say the Wing could be tricky in the Congo but I’m sure you’d be alright!

There’s a bloke on youtube who went round the world on a modern AT and had almost no trouble. Can’t remember his name, which is useful to you.

I have ridden over 200 bikes and the first one that springs to mind for a 'round the world adventure is an R1200RT. Hate to admit how good a bike they are because I spent at least a decade taking the piss out of anyone who owned one.