Press release in from Zero: 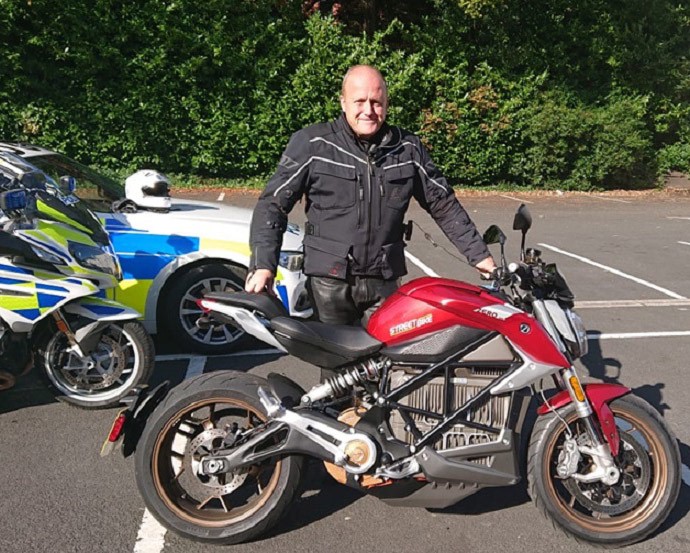 The unmarked Zero was ridden by an officer in unbranded riding gear over a two-week period. Footage from a body mounted camera captured car drivers putting motorcyclists in danger, with 84 drivers being stopped and either prosecuted or warned about their driving. One motorcyclist was also found to be riding recklessly during the trail, which saw marked motorcycles intercept offenders identified by the Zero mounted officer.

The Zero was chosen for the initial trial thanks to the environmental benefits of its all-electric platform. With Birmingham planning to introduce a clean air zone in January 2020, the team at the West Midlands Police felt that a fully electric machine was most appropriate for the operation.

PC Paul Ennis (pictured above), from the West Midlands Police’s Road Harm Prevention Team, rode the Zero and added: “I took the bike out every day, and did quite a few miles on it in wet and dry weather. Overall I was really impressed with the machine and range was never an issue, we simply charged it up every night and rode it during the day.

“I myself ride into work every day and found myself in situations where drivers had pulled out in front of me. The operation involved riding around the most vulnerable locations for motorcyclists, where the majority of collisions occur, and when endangered by a driver or witnessing a driver committing an offence which could potentially endanger a motorcyclist we would call in a marked motorcyclist to intercept and deal with the offence.

“The operation was widely publicised, in order that drivers who don’t actively look out for bikes would start to do so, especially when they also learn that West Midlands Police actively encourages motorcyclists who ride with cameras to send us their footage via our digital reporting portal so we can use it to prosecute also. This ensures a constant, credible threat of prosecution from not only our unmarked motorcyclist but also any motorcyclist. Once drivers are aware of the operation, they remain on the lookout for those on two wheels. They start looking previously where they didn’t and the resulting behaviour change creates a safer environment.”

Lesser offenders were educated by West Midlands Fire Service using a specially designed package which includes a section on how to look properly at vulnerable locations.

The Zero SR/F was provided on a loan from Streetbike of Halesowen, Zero’s longest service UK dealership. Jason Brunt, Sales Manager at the dealership, added: “We are always delighted to work with the police, from any of the forces around the UK, and even more so when they are looking out for all two wheeled road users. Police around the UK are now having to start looking at other alternatives to their petrol vehicles and Zero are at the top of the list when it comes to an electric motorcycle, with the SR/F in particular has what it takes to be an ideal machine for forces around the UK.”

Thanks for sharing, it’s great to see initiatives like these. Now, if only this could be rolled out in London…

Now, if only this could be rolled out in London…

if it is an unmarked bike it would probably get nicked in London!

a lot of this vid he was going 20 and got overtaken. This is exactly what I said would happen in a previous topic about the police cracking down on 20mph speed limits. Cant help but say, great initiative but why the f**k is it 20mph in half those clips… .

This is a classic “oh, that’s only a bike, he’ll have to stop for me”. Anyone who rides a bike, motorised or pedalled, knows this move. 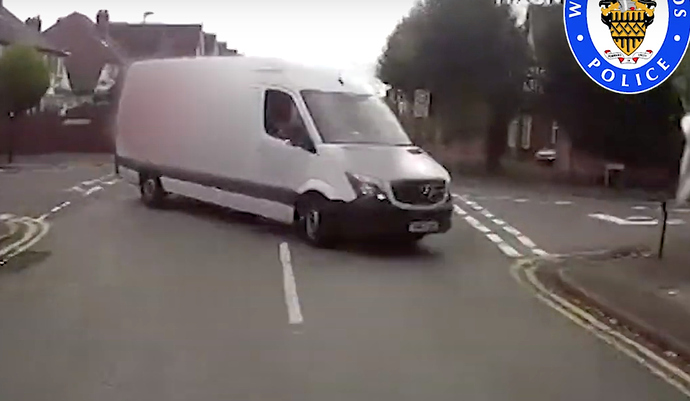 With the use of helmet cams and it being so easy to report dangerous driving online these idiots will soon pick up points.

Especially when they’re staring straight at you

You would hope this might be the case but more often than not the attitude is “there was no crash, no one was hurt, we don’t see it being in the public interest to pursue this”.

My experience is different Michael. If the clips are clear they’ve prosecuted.

There was a guy on this site that was done because he went up on the pavement and a cyclist recorded it.

My experience is different Michael. If the clips are clear they’ve prosecuted.

Hit and miss! I recorded me getting knocked off and the driver driving off and leaving me on the floor.

They did sweet FA about it…