So, say you had an accident in Southampton and could not ride home because you hand is now in plaster. What do I do about the bike which is on a pavement somewhere?

Your breakdown cover will probably do it, but they’ll charge it to your insurance company.

Unfortunately I do not have any. Would I need to go through insurance, as always I just feel off, bike I think is fine.

You should have accident and breakdown cover with the policy. Failing that, contact big D @ drbikes, he should be able to help.

I am with Devitt but I do not think they include it as standard. That is the user Big D on here? Will do that as it is only recovery I need, I guess.

Also should I call the police just to explain the bike being abandoned?

Embarrassingly it is only a broken little finger but need whole hand cast.

is the bike ok? could a mate get the train there and ride it back for you?

So I checked the weather and it looked fine, so went for a ride down south. On the way from Gosport to Southampton it rains quite heavily. It had mostly stopped as I was making my way through town. Approaching a red traffic light the was a large and slightly sunken manhole cover in the middle of the lane. I was in the right tyre track position so should have missed it, but while braking I suddenly found myself in the road, just ahead of the manhole cover.

I think the bike caught the edge, slipped down onto the wet cover, then just slid out. And landed, as always, on my right side. It was probably my fault, but my biggest fear about the bike was good early the wheels seen to slip on uneven surfaces.

So my fault — and I have still never hit or been hit by anyone or thing — and I only have TPFT (it is a class D 125, after all) so not covered by insurance.

No means and do not know anyone who rides, which is why I have to keep bothering you ask with my stupid questions. Would not even ask if anyone here wants a day out on me as I think the bike is fine but would not risk it. Only damage looked to be a loose mirror and instruments gone back slightly askew.

So private recovery seems my only option. Guess I cannot join a recovery service at non-emergency rates then get them to do it?

Will PM Big D when I get home.

Thought they would just strap my finger and I could ride home myself. But just a broken little finger and I need my whole hand cast, my good hand too, then see the local hospital next week.

Dude! You have terrible luck! Heal up quickly you’ll only miss the crap weather! Secret option three is ride home before going to the hospital just don’t use your little finger

Most breakdown companies aa rac will not recover accident damage only breakdown unless your policy covers it
Private recovery company’s will charge per mile
Best option if not time critical is to speak to companies like sos motorcycle recovery if they have a job in that area they could do a return trip for a back haul rate .
Hire a van
Speak to big D
How long is cast on for .
As yes its possible to ride with a cast on BUT a its awkward and B its bloody cold at this time of year with no glove on .
If bike can be left somewhere secure until your able to ride it then do that .
If bike is left somewhere ie pavement then it may get removed by police after a period of time as an obstruction etc and that will incurr charges .
If i knew when i was going that way with truck or even car &trailer i would offer to at least get it somewhere safe ( ie back to mine ) but its not a known scenario.

So sorry to hear this Michael. Mrs J is unwell otherwise we could have offered help.

Where are you and your keys?

Can you drive a car in your condition? Or do you have a pal with a car? You can hire a trailer for a bike and go and get it yourself?

If it’s rideable maybe get on a Southampton motorcycle forum and see if someone will recover it for you and ride it to your house. Do you have any military / navy contacts? They’ll help you out either.

yeah, local bike group would be of best use. someone will have space in their garage and take pity on you

Finally home.  Thanks, Jets.  I appreciate the thought anyway and get well soon to Mrs J.  The keys were something I thought about on the train, as unless I find someone coming from here I would either need to return or post them.  There was nothing to fasten the bike to, but I also wrapped my chain around the rear wheel and frame, as much to save carrying it home as for anything helping, as well as a xena disc lock.

TimR - I called the police just to let them know the situation in case it gets reported or noticed by them.  Its is out of the way of the path at the back of the pavement with the foliage so is not an obstruction.  Probably will not buy much time, but the pressing concern for me is it not being stolen or vandalized.

I do not drive and cannot think of anyone who could hire a van.  But I did think of putting something on Gumtree to see if anyone with van space was coming this way who could help.

That is a good idea, Joby and me_groovy.  For now it is more just about getting the bike somewhere secure rather than necessarily home, there is a national forum I also look at where I can ask if anyone nearby can help or provide local contacts.  Maybe a friendly mechanic too.

And I did have that idea too, Abzero!  Kind of annoying that I broke my elbow, shattered the bone, and still rode home, yet a little finger I do not technically need proved too much.  Some lovely passers by who helped had called an ambulance though,and the finger seemed wrongly loose at that point, so I was stuck going through the medical route first.  I do seem to have a habit of finding different ways of repeating the same accident.

A photo of the finger after the swelling started, and what they did to it.  All that just for a little finger!  I need to wear it until Wednesday though, then go to the fracture clinic to see what they say, no idea after that. 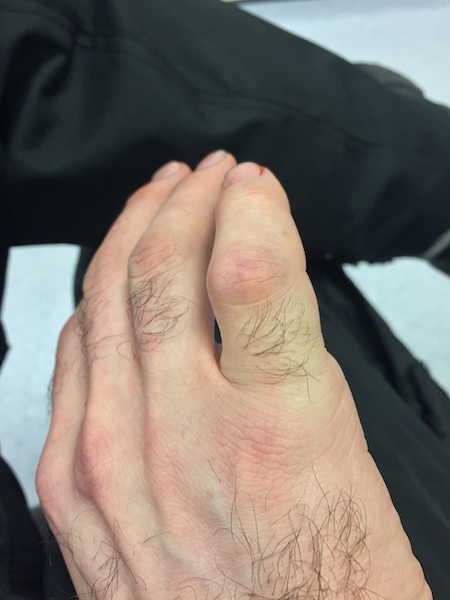 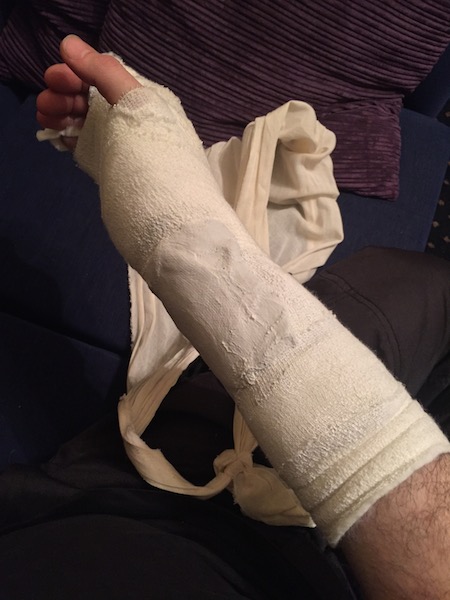 The aa charged me £110 10 years ago to recover a bike…was not my bike but aa cover the person not the vehicle ,so maybe friend with aa cover could help.of coarse they may have changed their policy in the last 10 years… Lol

It happened to me, about 400 miles into a RBLR 1000 ride. Exiting the A9 northbound onto the B8082, a sharp gravel strewn off slip, I high sided the Bonne’ on a combination of a broad side slide across the gravel and contact with the raised kerb. Engine bars saved the the Bonne’ so I continued on my way. Completing the 24 hour time limited ride in 23 hours 37 minutes and riding the last 600+ miles with a broken thumb!

My, too late to be of any real value, advice is now of no consequence.