I used Dunlops OEM D218’s until the front was gone, about 6000 miles then went onto supersprots avons and it lasted same amount 1000 miles slightly less than the Dunlops but they ride so much better and there is no drop into the bend as you get on the dunlops…anyway come time to change they did not have supersports tyres in and so I put an avon sports tyre on did a track day with it and it has still lasted about 1600 miles before becoming illegal…

I will buy one more sports tyre then the fron will likely need chaging but the combination has been really good as the front has alwys felt totally secure, and with the less grippy rear the back has always been first to play up and I prefer that…

And the original R1 was released in 1998

er new to illegal in 1000 miles? god knows what you’re doing on your bike but whatever it is it ain’t ‘normal’ thats for sure

I get about 3000 out of a set of Corsa’s, thats usually two track days and the commute to work every day. you must be riding the thousand miles on glass everyday?

Just slapped on new corsa 3’s and Love em, They seems to flex and move alot and when you have finised a hard ride you can see the 3 compounds. Very ncie tyre. But as everyone says its your choice.

What pressures do you run 2stroke?

And you use up 6mm of tread in 1000 miles, then run the same tyre for half as much again? How do you find the performance on the canvas? Do you find you need to keep topping up the air?

yes just made the last set last from 7813 miles to 9511, just under 1700 miles and I lost the legal marks somewhere well before that…the tyre was ripping itself up and was not good at all…

Should have taken a photo…bugger never thought…

…In 9511 miles (since new in 2006) I have used 6 tyers and all of them have gone into illegal zone before replacement, only becuase I can not get to change them easily…

It must be something I am doingbut cant imagine what, I pop the odd little wheelie now and again…nothing major like you see everyone else doing…so I just dont know what I do…I do like to nail it at every opportunity but I ride mostly for fun…and dont commute

I have never noticed any difference at all, except this back tyre seems to have gone off a bit since the track day and did not seem as sticky as before, I have had a few slippys out of bends as I power…never really check the tyre pressures will start doing that, perhaps I need to drop the pressures a bit, they may be getting too hot under ‘normal’ road use…

I like 36front 42 rear same as you. they say if you over inflate, then the centre will wear away. I say that’s going to happen on any tyre unless it is track use only. Maybe that’s too high if they really get hot?

I think you definetely want some dual compound tyres.

Why not try a real sport touring tyre like Diablo Strads or Metzler Z6 or Pilot road 2 (dual compound) you’ll get more mileage and they’re really good grip as well, can’t hurt to try them.

last day tomorrow, & you are supposed to have 2mm left on your old tyres

yes i found out about that today too…but mine certainly did not have 2 mm of tread left, bit bizzarre that one is…wonder why they want that ticked…

think that the softer sides burning up a bit quicker so helps keep their shape a bit (and being on the sides on the track days).

to be fair that mileage had squared 'em off pretty well by the end, but were still legal. not sure how kind my commute is on the tyre, no crazy speeds but suppose a lot of stop start accel on reasonably cold tyres so doubt it does the centre that much good.

i actually made the rear last to the very end as i was waiting for the 55 profile rear that michelin only just released (great option i might add). the thing steered so fast on the new tyres it was almost scary to start with

i run about 35f-38r on my bike incidentally

I agree those 180/55 profile rears are brilliant. For me they improve the R1s handling by giving more confidence when the bike is mid corner, but they take a short while (of scaring yourself

) to get used to the quicker steering.

Not sure if I would recommend a touring tyre for an R1 though. I had major problems with a rear Pirelli Diablo (standard), which would slip and slide and spin up really easily, even when riding moderately. This isn’t even a touring tyre, but it just seemed too hard and offered poor grip.

Strangely though, the front was fine so I mixed it up by running a very soft rear (Corsa III) and the harder front (Diablo) and the bike performed superbly.

Personally, I would run intermedite soft tyres on an R1 at least, and ones that warm up quickly like Michelins or Bridgestones. Pirellis are known to take a little longer.

what, you mean the front doesn’t spin up? spooky…

yes would never use a non sports tyre…

I thought this too mate, but have a look at the FWR site.

I got mine from there.

er mate, whatcha on about

i have bought 190/55. you can get a 180/55 and some guys in the US appear to like that option. prefer not to take the risk of losing out on the contact patch laying down the power personally which i’ve heard is the trade off for that tyre. haven’t tried the narrower 180 tho. rough diag of the shape comparison below

the width/vs aspect ratio will change how the tyre is stretched on the rim, and its shape. a variety of options will technically fit the 17 rim. 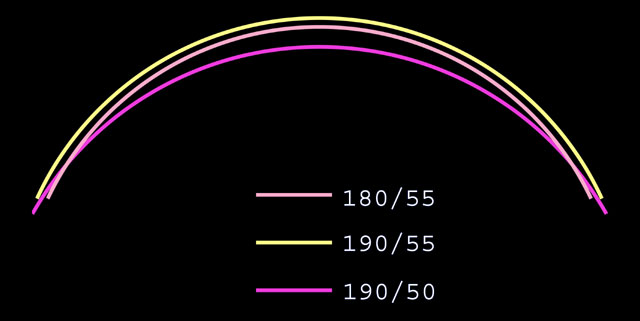 I’ll leave the numbers to you

Seriously, I couldn’t remember if they were 180s or 190s cos of the aforementioned yanks running the 180s and also that FWR seem to only do the 180/55s at the moment.

Not gonna try those for the moment (the yanks have funny ideas about the R1) because I deffo want confidence in corners rather than turn in speed which the R1 has anyway.

Rode Shewolf’s R6 the other day and back to back the R1 doesn’t really turn in that much slower. What I did notice was that it felt more stable in general than the 6.

same width tyre with taller side makes it more pointy. michelin started supplying the 55 at the end of June, altho not sure what has happened with their stock now that they’re scrambling around doing the recalls. blackandround on ebay are pretty good for stock in general

choosing between the diff road/race tyres isn’t likely to make much difference with corner stability mate (assuming newish tyres and decent pressures). what will affect it more is the setup of your bike/the way you set yourself up and apply throttle through it/what is going on in your head

I agree with you dude, but its no use saying it don’t make much difference when looking at it from a technical point of view.

Every slight change makes a difference (even if its a perceived over actual difference) to how a rider feels which can improve or have a detrimental affect on confidence levels even if on paper the changes look small.

My bike was setup for fast road / track use by HM Racing and I believe due to the harder suspension setup (springs and denser oil) with this configuration, that small changes are felt more so than stock.

Anyway, I don’t really care much for numbers. I don’t know much about suspension, tyre profiles and what not and I’ll never be an expert in the area so I leave that to other people.

maybe mate. i dont think i’m a good enough rider to tell unless someone makes a pretty big change (like shagged tyres to new pointy ones etc). maybe your suspension is set too hard for your riding style.

when i fluff up corners, its me, not the bike