The random sights of London

I saw this down Grey’s Inn road… Well atleast he’s prepared for any summer flash floods!

I see these around all the time, they used to be called Frog Tours and they store/service these old US WWII DUKWs at a yard on the corner of Kennington St and Westminster Bridge Rd. They depart from the back of the old GLC building and they enter/exit the Thames down the slipway next to the MI6 building in Vauxhall.

Because they’re so old they need lots of maintenance and regularly break down but it’s great to see them around. Not been on one yet but I live in hope my g/f might treat me :unsure:

This time of year, it’s the women in summer clothes that distract me in Central London!

I was working one Saturday when I saw a guy with three cows along Moorgate going towards Liverpool Street :crazy:

A couple of weeks ago I overtook someone going along Price Albert Road, around the back of Regents Park - on e huge unicycle ?!!?!

Followed a car transporter on the South Circular (I’m sure that falls foul of the Descriptions Act somewhere) for a mile or so with a newish Porche Boxster S on board today, wondering how big the accident was that needed the engine being held up into the car with webbing straps and big lumps of wood wedged under the sump.

yesterday I saw one of those electric cars recharging just off the Strand!! :w00t:

could this be the future? :ermm:

i heard of racing for pink slips but paperclips …pmsl

Presumably road leagal. I can’t imagine something that weird getting Single Vehicle Type Approval unless spot on.

Todays sighting, an “all American” street hot rod with jacked up, fully chromed suspension and axles, BIG polished alloys and what sounded like a big six engine all under a Ford Popular (I think) body from the late 50’s Absolutely f*cking immaculate.

Sad he turned off at Shooters Hill before I could get a decent fix. I was enjoying following that.

Saw Redrat’s “mobile office” flying down Marylebone Rd one morning, approx the same time ago. Then it had girly secretaries in sharp suits sitting at the desks pretending to work, drink coffee, etc. Made several buses swerve.

I was at traffic lights at Traf Square on way home from work this evening, then I heard a SMASH and turned to see a DUKW hit a car and push it along the road. I didn’t see how the car came to be in that position so I wouldn’t make a suitable witness. I parked my bike to check the driver was ok, and he was. So I took this photo:

The driver is the smartly-dressed chap on the right. No-one was hurt, as far as I could tell.

Looking out in to fleet a few years back i saw a Cyberman walking by ! ( not a cheap fancy dress costume either but a pukka 1970`s kit )

Heading into London on the M3 a year ago. 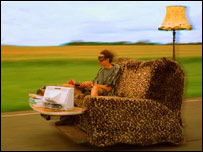