£2,600, but I love it. Awesome AF, low-light sensitivity, full-frame and super frame-rate. Hrm. How to justify an upgrade? 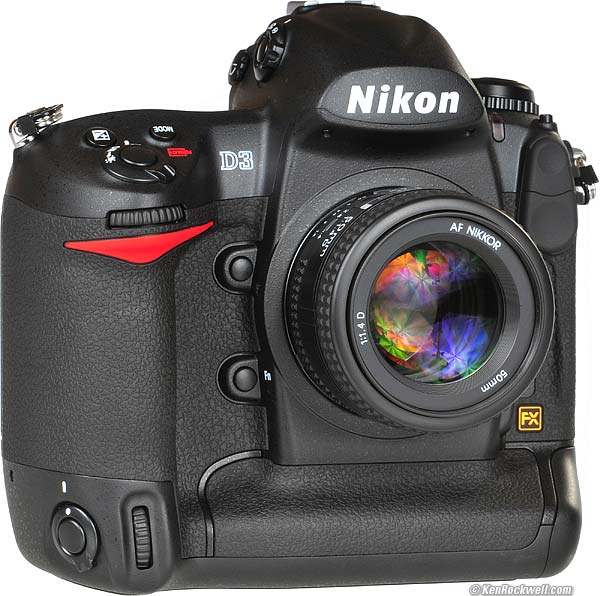 That lens looks tiny on a monster like that:w00t:

Couldn’t see it on the features list, but I thought the new D3 came with inbuilt bluetooth connectivity?

I hope not, I can’t stand Bluetooth. Everything Bluetooth seems to either not work properly or buggers something up.

Pro Photography magazine have just reviewed this against the mighty 1DS Mark III from Canon (21mp) and, apart from the obvious final image size issue, they reckon the D3 was incredible. When you think that is £2,300 (ish) vs £5,300(ish) that is a big win for Nikon.

I particularly like it’s ability in low light conditions. That really is innovation and about bloody time from Nikon!

Here’s a controversial statement though: ‘I think Canon Glass is superior to Nikon Glass’.

Anyone else have an opinion?

Low light is the killer feature for me, as I take most of my shots in low-light it seems. Cannon have always had Nikon in this area it seems when I look at our boys shots compared to mine, but my relatively new VR lens has done wonders for hand-held 5-10ms shots.

I love Nikon for still picture and Cannon for moving. I’d have this D3 in a second if I could justify it.

Glass? No opinion on that.

but that is just the camera. If you are spending 2.5k on the body you want a comparable lens. 3.5K should get a decent one.

Jay, the VR lens are the dogs danglies… but for any long exposure shots a mono/tri pod is a must (including Canon’s)

As far as the D3 is concerned YES YES YES… upgrade… I only have the D80 and love it with a VR lens but the D3 with VR lenses at 1.4 to 2.8 are GOOD for low light but EXPENSIVE :crazy:

D3 is £3000 body only at Camera Warehouse. It’s an awesome bit of kit, no doubts it’s better than my 1D Mark III as they’ve had a year’s dev time and a benchmark to beat.

Pricing is interesting as it does put it above mine by some £600 but I expect the few Nikon users in the pressroom will upgrade if poss.

Fuller spec here http://www.warehouseexpress.com/product/default.aspx?sku=1021977 9fps full frame? But that means an effective decrease in focal length which is gonna hurt sports guys - we are only going to be further from the action in the future not closer. I noticed a drop from the 10D which had a 1.6x mag factor to the 1D with a 1.3x

I agree with Morgan tho, Canon have a huge monopoly on sports based work, but Nikon still produce a slightly sharper image for landscapes portraits etc. Their AF system isn’t as good as Canons I think.

Glass? Well depends on exactly which lenses you are comparing. And there’s more to a lens than just glass. Too hard to call, but certainly in the old days Nikon was meant to be a little sharperthan Canon but whether it’s big enough to matter? Doubt it.

It’s a good camera no doubt, but it’s taken Nikon too long to come out with a FF camera, and unlike Canon who built the majority of their lenses for full frame use from the start Nikon didn’t and it’s going to upset a few folk who have a fair amount invested in glass designed for a cropped sensor.

Forget that lens, it’s all about the 18-200mm VR. It’s the same one as I have and it’s the only one I use. It’s incredible. Very versitile. I am thinking of backing it up with a 50mm 1.8a for super-sharp work.

For anything longer, I hire from Fixation (quick plug), though there’s not much call for that now with our photographer team kicking ass and taking names.

Read that, you won’t be dissapointed.

Jay, what are you using at the moment?
The D300 is a pretty incredible piece of kit as well, a friend has just bought one and it’s awseone. Low light perhaps not in the D3 league but it’s way better than anything else I’ve seen…

I’d love to upgrade to a digital and was looking at the D80…but I don’t do enough photography to justify the cost of buying a new camera at the mo.

I did a 2 yr evening course on it all a few years back but hardly use the cameras.

I still think Film is better than Digital…but I’m getting to lazy to use film and keep taking my digital compact everywhere I go…am I naughty?

SLR images are always amazing and you can do so much with them. The Medium Format images from the Mamiya are spectacular with its depth of field…but getting the films for it are getting harder to find.

I take it everyone on here uses their photography for work!?

I currently have the Canon EOS 1D mark 2

my boss has the other 3 in the range But hell, that D3 looks a serious bit of kit and aside from being an ugly mofo (like all Nikons IMHO) it is really well spec’d up. If they’ve cracked the high ISO noise problem that has plagued all Nikon DSLRs then it’s a wrap - seems much better than my 1D MarkIII on paper.

But mine’s still way too sexy.

Well only once Canon have shown them what to do each time.

yeah they do and if you look at the stats. they are number 1 dlsr brand world wide

thanks to the D3

guys if you cant affoard a D3 the D700 has the same ISO. its the same chip. just a smaller buffer. which you can boost with a hand grip.

I thought my new Nikon was expensive :w00t: