The AA... taking the piss

I love it when they tell me on page 1 I’m upgraded to Silver for free, and it will autorenew automatically. Then on the pack of that I see this…

Every year the same shit… Apparently the year before I had a discount which was equal to two years of cover. This is by far the largest jump I’ve seen 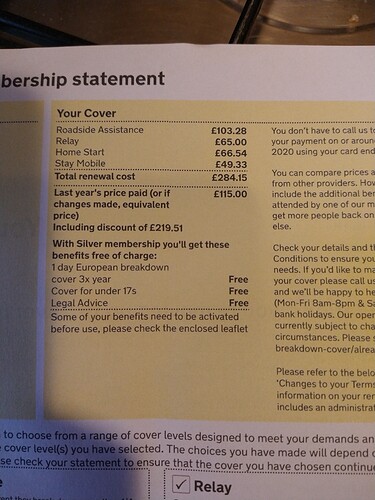 For point of fairness, the RAC do exactly the same shit and I just end up flip flopping between the two as had bad experiences with recovery via bank/ insurance

Happens to me every year as well and every year I call and they reduce the price to the prior year.

ps your negotiating position is stronger the less call outs you’ve had.

The RAC always bump it back down to near what I paid the previous year after a phone call.
I don’t mind paying a bit more due to inflation and suchlike but double is taking the micky

It’s just annoying that they can’t give people their best price first time… And we have to do this stupid dance where I waste £20mins on a call.

Last year they refused to budge so as we were on the call I went online and got the new customer price. Finished it before I finished my call and it didn’t pick me up as returning customer. Was fun saying that on call

Just get your insurance with Bemoto and you get free UK and European breakdown cover.
Works for me!

Well in the end, waited till the very last day (expires today). Went back to AA and the website had an offer on again… £93 for the year for home & national recovery which is all I need as I only have the car and typically would have travelled maximum 120 miles away (before Covid). Didn’t need onward travel but that would have taken me to £113… (£2 cheaper than last year).

When I was on the call with them, the lowest they could do (and the lowest on the website for that) was c£140 so a good day and good to remember next time to leave till the last minute

My first year of AA membership ended with a doubling of my premium. The 7 breakdowns evidently meant they weren’t budging either.

RAC did the same a year later before Green flag stepped in.

That Cortina really was a pile of sh1te

I was tempted to go with green flag but was unsure because they use local garages so you are relying on them being reliable.

The RAC did the same when I had the rustbucket ford fiesta that leaked every fluid at some point and all together. I still miss having to top.up oil and leaving a smallish oil patch on the gravel courtyard of a posh hotel

I’ve generally had good service with both RAC and AA although both a couple of times have annoyed me with their insistence to send a van first then order a truck when I had a bike (and knew what was wrong).

Luckily when I was broke down at home I would get the van to come last thing at night, so that they would send the truck first thing next morning to take me to mechanic…

@Serrisan I can speak from experience regarding Green Flag as I used to be one of their motorcycle recovery agents when I had my business after I retired.

The fees paid by Green Flag along with mileageis very handsome, so agents will do their best to provide a good service. It also means in terms of bikes that wherever possible you get a specialist which you don’t always if ever get with the AA or the RAC unless the patrol happens to be a biker.

With both bikes and cars, the agent must attend with a vehicle suitable to recover in the event thata roadside repair cannot be affected and unlike the others who often relay, GF use one vehicle straight through. I once did a callout at around 10.30pm and took the rider and bike to Pymouth. I got home around 10am totally knackered, but it avoided waiting for a relay to meet us en route. That one job was worth about £1,000 and this is going back a few years, so probably considerably more now, so not to be sniffed at, but even your average local recovery is worth around £150 - £200 with mileage, so agents arenot going to throw good money away easily (although I accept that there are always those who do not fit the bill properly)

Every agent is vetted. Vehicles, equipment, facilities, experience and expertise and this is ongoing every 3 months or so.

It is made quite clear that if the agents are not on scene within an hour unless they have told you of specific delays then the member gets money back.

The AA and RAC (along with some of the other companies) use agentys to a lesser degree, but it is GF that most want the agency for for the reasons mentioned above.

I was aso an agent for all the rest, but for me GF still remain my favoured breakdown agent for both 2 and 4 wheels and are often cheaper if that is any guide or recommendation?

Thanks T.C. Very useful to know and will keep in mind for next renewal. Ultimately I got a good price I was ok with but if they had stuck to original I would have given GF a go…