Tweeter, commentator and cyclist all decided the motorbike is the guilty party here. Once the car stopped I can’t see what they expected him to do here…

It looks to me like the car driver had no choice, there was a competitor on the floor, the driver had to stop; it was unfortunate it happened at a pinch point. As there was a pinch point it would have been reckless of the motorcyclist to squeeze through, and if he was looking ahead he could probably see why the car driver stopped. IMO the motorcyclist did the right thing.

Yeah, there’s actually 2 bikes down - the first crash looks like it basically caused the second. The first one also seems to be being blamed on a motorbiker - - the guy with sirens. He looks like he could be a medic or a gendarme - but leathers look plain.

If in doubt - blame the police I reckon

Depends on priority. If its part of a race and track is closed to the public traffic the cyclist expects everyone to give him room. Motorbike seems to be press so if they were trying to squeeze past the car to get an action shot that is naughty.
If however it is a normal day and everyone is equal cyclist should not try and cut into path of motorbike who has taken a line to avoid the car.

Classic cyclists blaming everyone else…

However, I’m sure the Daily Mail will be reporting that the blame is clearly down to Jeremy Corbyn, 'cos he & Dianne Abbot once went to Europe on a motorbike.

Difficult to see what caused the first cyclist to come off but clearly the UAE car and therefore the press motorcycle had to stop and both did. Bauer was not able to stop and rear ended the car.

Bauer has only himself to blame and for those thinking otherwise apparently later on in a press interview Bauer refused to blame the press motorcyclist or the driver of the UAE car for the incident. 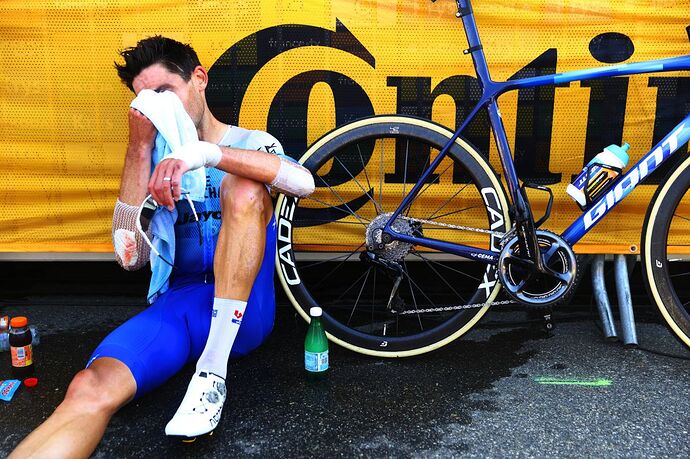 Jack Bauer: 'I wanted to crash into the UAE car because I knew it was softer'

Totaly agree
The motorbike should have stayed back

One thing here, the video before it all, did that press bike even know he was there?

I mean look at the video, Bauer comes up behind the motorbike, goes into his blind spot, motorbike has to stop because of the car and no room left. The first the press bike probably knew about him being there was when he was bouncing off of the car…

Bauer said his choices were to either head off to the left and hit a building or maintain trajectory and hit the UAE car. No mention of hitting the motorcycle.