I need to put some miles on the SMC R. Can’t go early in the day but does anyone fancy showing me some lanes around Surrey Hills? @Panagiotis?

If Panagiotis doesn’t reply, for a scenic spot google Friday Street. Roads around there are decent and end destination is pretty spot. The pub there is good if you can get a spot

That’s exactly where I’ve been going

Cool, heading to box hill now. Anyone else out?

@Panagiotis and I went for a nice ride around the hills. Man there’s some stunning places in there.

Stopped off for some fuel and this huge cabriolet American wartime truck parked up next to Pan’s bike. I though it was going to crush it lol.

Visited Rykers on the way back. It was heaving. Toilets and cafe open. Yay. 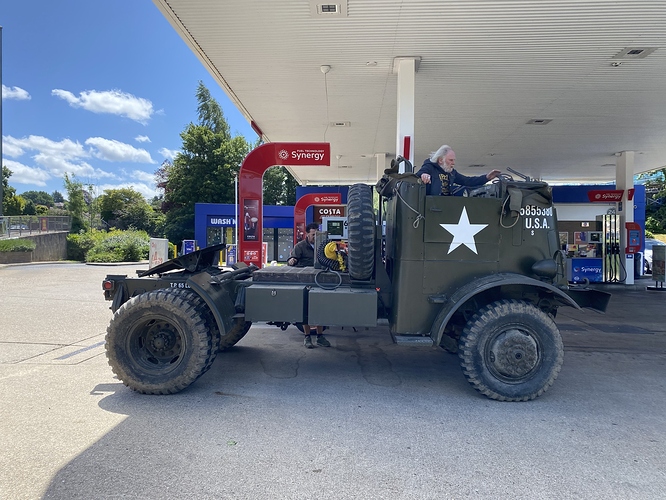 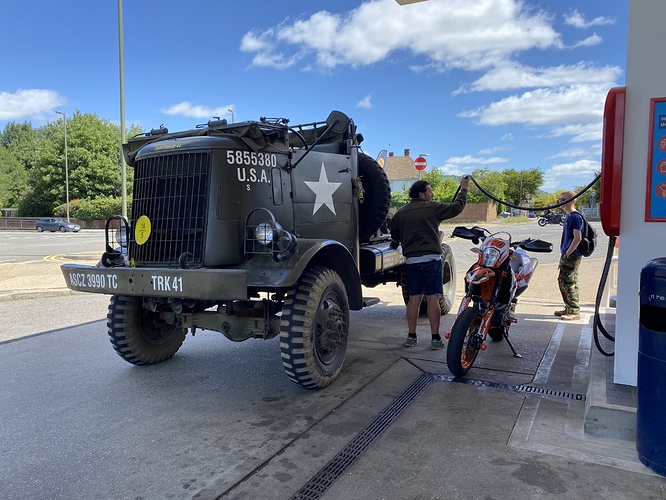 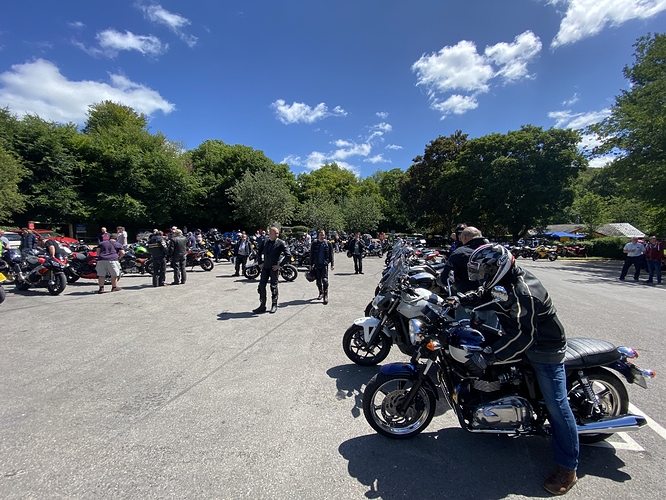 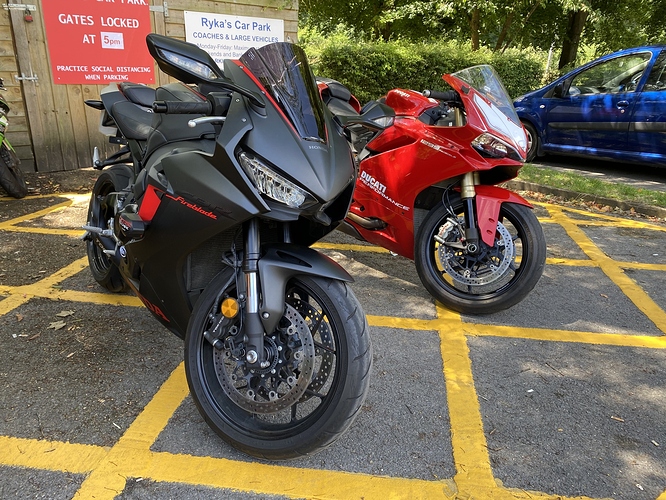 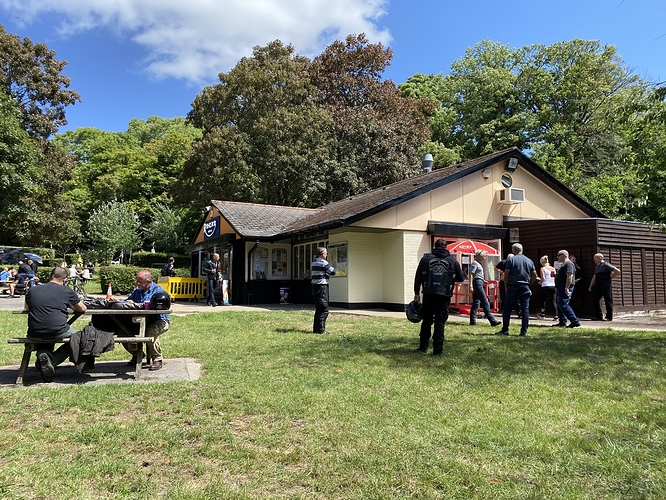 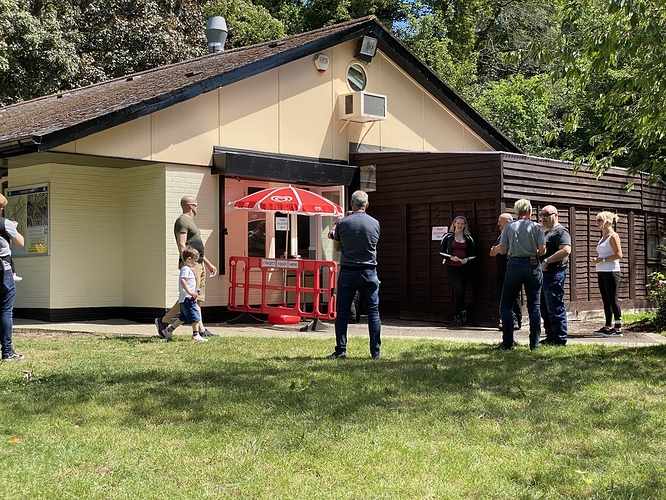 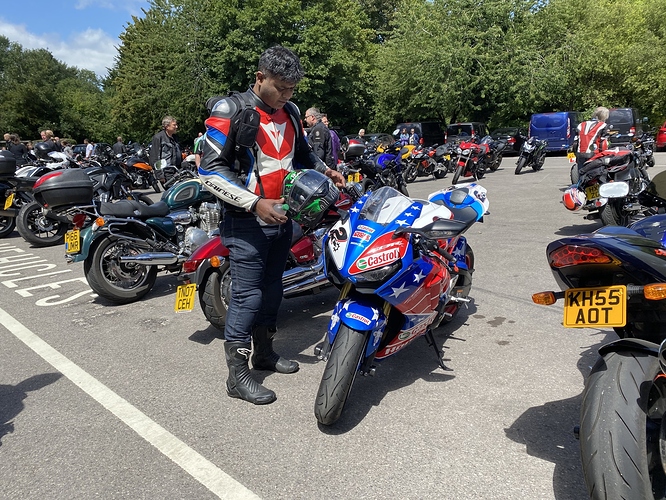 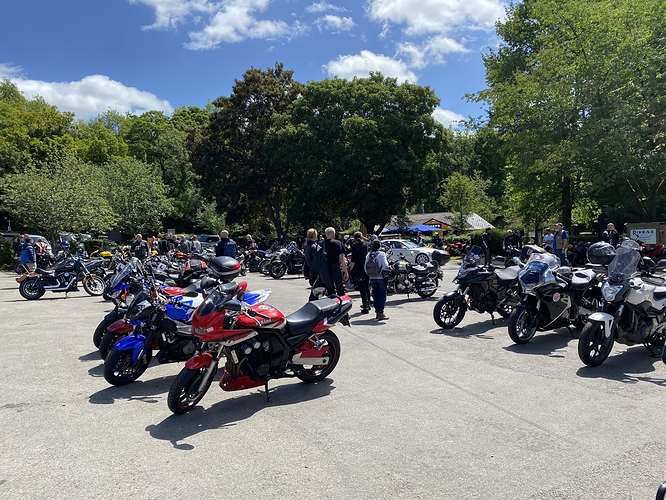 Who was the criminal you visited at rykers

It was good fun indeed!
Realised as I got home that the rear right indicator didn’t work, a wire worked itself loose. And the license plate is cracked !

Hahah I thought to myself “hrm, Pan doesn’t like to indicate much, does he?”.

And then later I thought “his bloody plate keeps reflecting the sun I my eyes as it moves about a lot”.

Ordered myself a smaller plate as well.

Haha yeah must have been weird to see me indicate only for left turns.

Where did you get your plate from? Need to make an order

+1 on recommendations for buying smaller plates.

Though I had a glance at the laws and it seems they can’t actually go much smaller than the usual dealer fitted ones?

You’re looking for “show plates”, i.e. ones that are just for showing on your bike at shows, i.e. off the road and so don’t need to comply with the laws regarding plate size and formats.

There’s loads of such suppliers but I bought mine from:

Don’t think I’ve bought from them before so will let you know what it’s like when it turns up.

I think I bought my plate in eBay. And I’ve seen plates the size of my phone come back from a passed mot at a friendly mot place. But these bikes mainly get used for offroadinf.

I had been riding like that with my SMC for years in London, not a problem. One evening in Sussex, cop pulls me.over and gave me a ticket not for the size but the fact he didn’t like the angle of the plate. It wasn’t that it was a bit smaller but he felt I was hiding it from cameras or that he couldn’t see it from his car… So he said.

The guy was a wanker through and through and I didn’t argue because my tyres were on limit, my indicator had stopped working like Panagiotis and I was in a rush to get home before dark as my headlight bulb had gone.

When I got home I added some 90o brackets to straighten it. Might be worth doing upfront.

LOL, just a few things wrong with your bike then eh @Serrisan

Thanks for the headsup. I might just get a tail-tidy after-all.

That was back in the day… all were fixed very quickly but plenty of offroading sessions meant mud was everywhere and fixing stuff got messy.

The old SMCs rattled fillings out so bulbs and connections always went at some point. I like to think of it as KTM being safety conscious and forcing me to do checks before every ride. Mechanically it was a very sound bike… I wonder where it is now

As for the plate, again I think I got a numpty officer with an axe to grind. Luckily every time I spoke to an insurer they told me that fine didn’t need to get added so it was never a big deal

Edit: Sigh… I can see in the last year it’s done 5 miles… poor thing must be aching to be let out to play

OH for crying out loud I’m now looking at bikes and this has popped up 4miles away!!!

Thanks for the headsup. I might just get a tail-tidy after-all.

@Serrisan KTM wasn’t a 690 so it was a different angle.