This was clearly not ment to cause such controversy guys. Just supposed to make you crack a smile and continue your day. We all laugh at things we shouldn’t and considering it didn’t actually happen I don’t see why everyone feels the need to state the obvious? No-one thinks rape is funny. No-one wants to be a rapist.
Someone was trying to lighten everyone’s mood.

It’s a JOKE about how statistics can be swung in favour of something bad. The example is extreme but proves a point. Either way it’s meant in humour not in gest of a serious situation.

I’m not looking to argue with anyone but c’mon guys and girls, lighten up a bit.

“Someone was trying to lighten everyone’s mood.”

“Someone was trying to lighten everyone’s mood.”
By being offensive?

Someone is always being offensive.
People are so touchy. Get over it. It was a joke. If you took offence to it that’s fine. Your an adult you can be offended. Doesn’t mean what was posted was wrong. Or poster with malice.
I’m offended by the fact everyone seems so against this bloody post. If you don’t like it. Move on. As I previously said, your stating the obvious. No-one wants to be a rapist. Rape jokes are not the ‘cool Thing’ but it’s like any joke…some will like it and some will have a problem with it. Personally I think there’s bigger fish to fry than one guy posting a joke on a supposedly social forum.

Am I the only one that’s going to admit to a guilty chuckle when I first read it? Yes, it’s highly inappropriate and actually, no, it shouldn’t have been posted on here. But quite frankly there are bigger things to worry about and get worked up over than a tasteless joke. I’m very much with @Shaunicus on this one.

Sadly, that’s no different from anywhere else in the country.

plenty of problems in this world, not only rapists. One of the many problems are comedians capitalizing on the misfortune of others
IMORTAL_Indian 25 September 2017 15:47 #29

I really wanted kids when I was in my early 20s but I could just never… lure them into my car. No, I’m kidding… I don’t have a licence.”Felicity Ward (2012)

This I guess is on the same lines…

Shaunicous…Did you make that up or knick it from somewhere… again, people would not have liked that joke, but would have laughed like Janey, and then moved on… Everyone has their line in the sand…

I’m offended by people being offended.

Problem is rapists…not comedians.
Shaunicousplenty of problems in this world, not only rapists. One of the many problems are comedians capitalizing on the misfortune of others

People who bring laughter will never be a problem with the world. I guess we will have to agree to disagree. Far worse things in the world than comedians gaining from the I’ll fate of nameless.
Though I suppose since there’s an element of fighting for the people in what you’ve said that you always buy fair trade goods? And give every farmer ect fair pay? Or do you (like many of us) buy stuff cheap to fuel your riding habits?(not picking fights here, just think as a group we should be more accepting. No-one was hurt. It wasn’t a story about someone we know although terrible things happen. )

WOW!  Must be a full moon today!

Sadly, that's no different from anywhere else in the country. Janey

I don't understand how lots of women being raped is a reason to keep laughing at it.

A conservative estimate states that 1 in 4 women have been sexually assaulted. The numbers for men are harder to uncover but currently the United States estimates 1 in 33 men have been raped. I don’t know the figures for men in the U.K off the top of my head.

Therefore several people on this forum reading this ‘joke’ have been raped. Sexual assault is something that will change you forever. My best friend was horrifically beaten and raped in a park when walking home from school. She was in hospital for 5 weeks and didn’t have a consenting sexual relationship until her early 30s. Can you imagine how you’d feel if that were you and then you were around people laughing about it. I have another friend who was raped by a teacher at 14 as he was
supporting her over the death of her father. Those are only two out of a handful of stories. There are people in your life who have been raped and people in your life who who are rapists.

Is a cheap laugh at a shit joke worth it? Most online forums have T&Cs about things like this and it’s commonly understood as a fair and reasonable rule. I’m surprised so many people were upset by this joke as previous rape jokes on here have gone by without comment. It’s important to call out racist, sexist (ect) behaviour because those behaviours shouldn’t be normalised and trivialised. People who have gone through that experience shouldn’t be made to feel like it was something to laugh about.

If you want to create an online community where people feel welcome then isn’t it better to be considerate? No one wants to come online and read this horrible post of
people arguing about a rape joke. No one is saying don’t make jokes. Just don’t be nasty.

My cousin is Therapist he said he always fully booked for Therapy at his shop.

I think they are right, we’re overreacting.

I must have forgotten this forum is full of impotent wankers so nothing to worry about.

It’s not hard to find a video on YouTube of some dude that has the same opinions as you. You just have to read the comments on any of David Icke’s videos to see how low the bar is set.

Ugh, saw Steve Hughes at the comedy club in London, he was rubbish.

Wasn’t intending to be controversial, but hey, you’re either into Frankie Boyle or you prefer Ricky Gervais’ home counties ‘humour’. 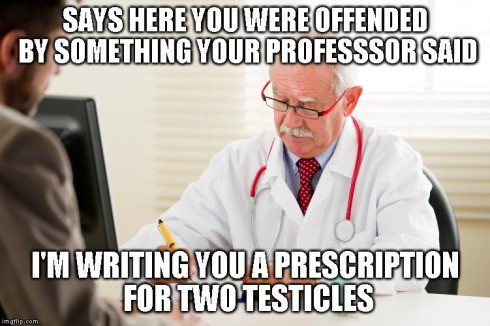