Hi guys, I went to the MCN bike show at the Excel yesterday and had my bike stolen from the so-called secure indoor parking! It was a triumph street triple R in black plate no LB10 NKS. It had a disc lock on it and the steering lock was engaged. It was parked close to the doors into the Excel. Three kids on two scooters went into the bike park, at about 4:20pm they cracked the lock off and hot wired it before speeding off. Security was down to 1 person and a parking attendant at that time. If anyone sees a black street triple r for sale on eBay or Gumtree in the next couple of days please let me know. It has a fly screen, r&g crash bungs and handle bar clip on mirrors. I only bought it 3 weeks ago. These are the pics from the dealer before the fly screen and crash bungs were added. Thanks 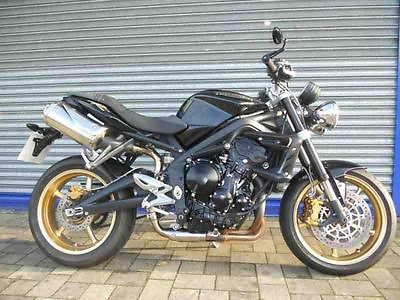 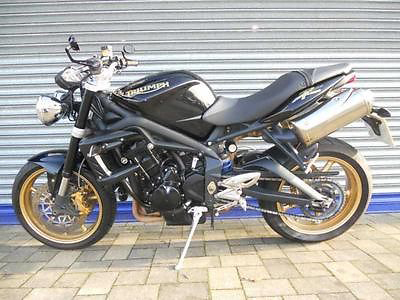 oh god, sorry to hear that. I had my new KTM duke nicked a week before xmas, thieving fuckers!. Is there any CCTV footage at all?

Jeez, not what you want to hear when someone goes to a bike show. I wonder if you was the only one that had a bike stolen?

There was CCTV but it was pretty patchy coverage. They all had helmets on so the police couldn’t get an ID on them. Apparently these guys are known to the police in the area. It’s frustrating that security wasn’t better given that there is a known problem in the area and they had tons of guys indoors and they couldn’t spare an extra pair of hands to watch the bikes of the paying punters!

There was another Triumph that they attempted to nick earlier in the day. It coincidentally belonged to an off duty police officer. He had an alarm and enough people started paying attention so they didn’t manage to get that one.

Very Brave to knick a bike from a place full of Bikers!! one way ticket to a good hiding if they got caught!!

Sorry to hear this happened to you, and hope you get it back.

Sh!t mate- bad news, good luck with it. I was there Saturday and there were a couple of guys on each door early on but only one at 5:45 ish. I suppose there was only one door open (the exit) by then.

Very Brave to knick a bike from a place full of Bikers!! one way ticket to a good hiding if they got caught!!

Sorry to hear this happened to you, and hope you get it back.

You’d think that but there are always bikes stolen at BSB’s - easy pickings of a good selection of bikes.

the worst thing is, that police know who they are and won’t do anything. Go and have a look in the streets next to Prince Regent Lane, you might find it there somewhere.