Please send to anyone and everyone. It was SORNd - so no insurance - FULL LOSS

BIKE STOLEN!!! A black/grey 2008 Yamaha YZR R1.
With R&G Tail Tidy, Meta Systems Def Com T Alarm, new Pirelli Corsa III tyres. No other mods. Had a Squire MC4 with SSC50 shackle still attached. Unfortunately, it was stolen sometime in the last 10 days. It was stolen from the Battersea area (SW11). No use giving number plates as they were ripped off.
Any information or if you see (!) it please call police or ring myself 07916585023. 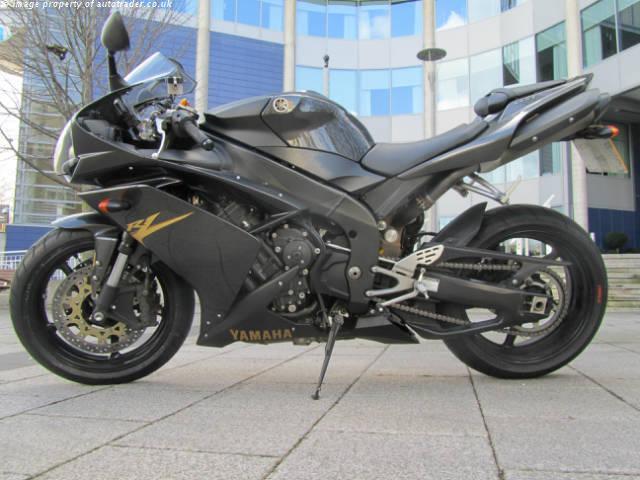 Since it was SORNed I guess it was tucked away in a garage somewhere?

Proper gutted for you fella keep my eyes peeled mine is sitting locked up uninsured aswell must get on the case.
dan when i was in bow mine sat in a garage a mile away in the winter it could have been robbed months before i clocked.

I hear what your saying monkimark and redrat, its just if I had an R1 it wouldn’t leave my site… I’m a bit sad like that :Whistling:. Lush bike though.

I do hope it is returned to the OP in one piece.

If I was laying one up for winter I’d get some mates round and carry it up into my flat!

I saw one just like it in New Cross today at around 3:55pm

Dude was filtering behind me all the way to Camberwell Green and then went straight on towards The Oval. Didn’t seem like he wanted to pass me… might have been because I had my helmet cam on?? Thought it was a bit odd as he could have blasted past me easily with me on my GSX650F.

Anyway, it had damage on the offside front fairing. Mainly scratches, but the fairing had come away from the mountings a bit too.

Also, it had after market exhausts… Not sure which kind.

Probably not yours mate, but you never know?!

Bad luck your security sounds half decent too, was it shackled to a ground anchor?

I know it doesn’t help your cause but I’m not sure I’d have left £5,000+ lying around uninsured. It may be of interest to others reading this with SORN bikes, even though a bike is SORN it’s still possible to insure it against theft. As mentioned above the best deal would probably be by adding it to your house contents insurance.

The chances are slim but best wishes for a recovery.

sorry to hear about your loss mate

hopefully she is found soon and recovered and bought back to you in a fit state.

I hear what your saying monkimark and redrat, its just if I had an R1 it wouldn’t leave my site… I’m a bit sad like that :Whistling:. Lush bike though.

I do hope it is returned to the OP in one piece.

One of my thundercats is SORN’d, and in a mates garage. Checked regarding insurance, it appears no one will insure a SORN’d bike. needs some form of tax.

I can’t imagine it’ll get knicked. But should they try, it has a boat in the way, and a french cast iron bath tub that looks bigger than the bike itself. How about that for security

Though genuinely, I hope you get that beast back. That picture is practically round the corner from where my bike is kept.

@redrat - thats the way to do it. Gotta look after whats yours, nobody else is going to do it for you.