Not mine and I’m trying to get a location. Thing about these is that they tend to get ridden around a bit so here goes - he stuck his mobie on the post but instead PM either me or Chad.

EDIT: Video footage is poor, however he is going to request it under the freedom of information act to try and enhance as some people are being a bit unhelpful. It’s all a bit odd as it seems a vehicle was used to carry away it away as it can’t be seen being ridden out of the compound - despite being 15 metres line of sight from the secuirty booths.

Came out of work tonight and my baby has gone.

It was fitted with a matching Baglux tank cover, some Crash Bars (high ones also covering the plastics), pannier racks and a Honda Top Box covered in stickers from last years big trip. Right hand side bash plate mount (as you face the nose) is broken, and left hand fairing panel is cracked.

Also had a tall, dark touring screen with a Scottish flag sticker (covering a small X shaped crack), and a 12v socket fitted to the side of the idiot lights. There’s a centre stand fitted and the foot on the sidestand is broken off. (MOST AT’s ONLY HAVE A SIDE STAND)

Needless to say I’m gutted. Not just because I spent £334 getting it through its MOT 3 weeks ago, but because it’s the bike that carried me 11,000 miles around Europe and North Africa last summer.

Any sightings, please contact me on PM MACP OR CHAD. Meantime I’m off to drink beer and look on Ebay for a Sniper Rifle. 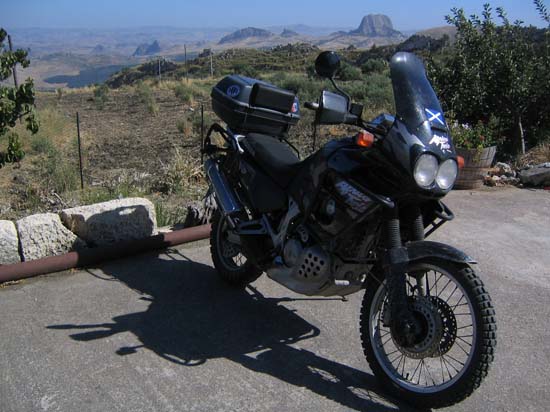 Sorry to hear the thieving ba***rds have taken your pride and joy, eyes will be kept open and a check will b made of all Africa twins I pass.

Gutted mate hope your reunited with your baby soon. Will keep an eye out.

Was that the bike I saw at the Cubanas last night?

Where was it stolen from, and how?

Just to confirm my is okay and the other AT you saw at Cubanas yesterday was Chad’s and his is okay too.

I’m trying to get a location for where it was taken from but Robster lives in Middlesex London area.

Thanks for keeping yoru eyes open!

Glad to hear at leat one good news