Could we have a separate forum for the stickies. I am certain I am not the only one that finds the seven or eight stickies clinging to the top of the General Chat Forum annoying. Perhaps we could name it the “Cling-on Forum”

Maybe you could use the recent topics facility instead, this will then show you the most recent posts made. 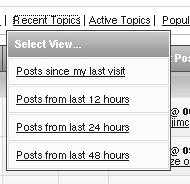 Can we have a seperate forum for the stickies???

I’m with Lust on this one (yeah I know!) I just use the Recent Topic button - much easier…

How long does it actually take to scroll past 7 stickies?

I use the recent topics drop down too

This issue will be resolved with the new forum, there’ll be better stickies and fewer of them. Coming soon…

Just switched to that Shauna, much easier

you might get repetetive strain with all that wrist action…