At a time when people suggest the speed limit on motorways could be increased due to safer vehicles and better braking this happens. 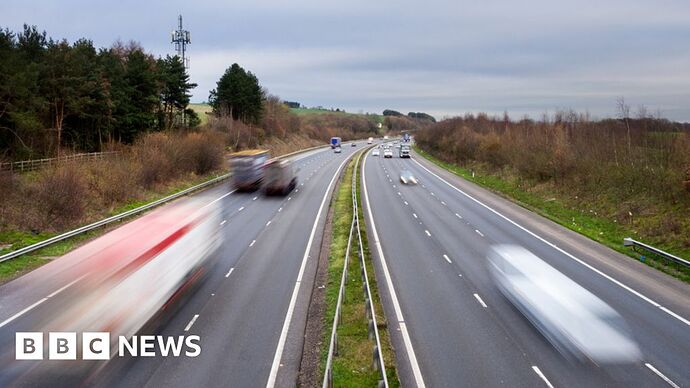 The trial on five stretches of the M4 and A-roads is to be made permanent.

Temporary 50mph speed limits on two stretches of the M4 - introduced to cut air pollution through built-up areas - are to be made permanent.

The limit was reduced on the motorway and on stretches of A-road in December 2018 in an attempt to cut nitrogen dioxide emissions.

The High Court had ordered ministers to act after they failed to meet EU targets on air pollution.

The Welsh Government has now confirmed the restrictions will stay permanently.

They’ve been doing this in France for years. I think the first one was around Grenoble over ten years ago. Chamonix valley followed suit recently on the France>Italy autoroute.

There is no getting away from the numbers: vehicles produce more stuff at speed, more gases and more noise. Anyone living nearby needs less of both.

and the numbers are?

Let me google that for you…

Introducing lower speed limits on motorways is expected to cut both fuel consumption and pollutant emissions. The exact benefit depends on a number of factors, however, including both technological effects such as the fall in energy consumed when...

'Do lower speed limits on motorways reduce fuel consumption and pollutant emissions? Well the answer should be an obvious yes but the European Environment Agency statisticians have come up with 'it depends on how realistic the settings are.

The real question is are ALL these lower speed limits doing more harm than good? For example if there was any saving in emissions through lower speed limits on motorways would there be enough to off set the increased emissions in built up areas where the speed limits have been reduced to a level where a lower gear is required to maintain forward momentum?

Why would a lower gear increase emissions?

Presumably the revs are going to be around the same as that’s the reason for changing down.

Because your covering less distance for the same or similar emissions.

Engine emitting less emissions as lower revs but switched on for a longer period.
Hard to see where the saving is. Also if everyone is on the road for a longer period will that increase congestion and mean the journey time is even longer hence more pollution?

At motorway speeds, I imagine that the air resistance reduction saves a lot of fuel. Air resistance increases in proportion to the square of speed.
Also, isn’t the point of ‘smart’ motorways that they can reduce congestion at busy times by lowering the speed limit to reduce the stop/start bunching of cars?

At motorway speeds, I imagine that the air resistance reduction saves a lot of fuel.

That’s the key. I remember belting down the French Autoroute at speeds I shouldn’t admit to on a public forum. My Ducati converted its fuel tank to power and pollution in one hour; I had to refuel every hour on the hour.

At more normal speeds I would expect to get three hours’ motoring between refills.

I was producing three times the pollution because of the speed.

The motor industry has re-designed entire model ranges to maximise on MPG and therefore minimise on emissions. Those engine and body innovations had in mind current speed limits when calculating the final drive gear ratios to achieve that. Lowering the speed limits, for whatever reason, is simple moving the goal posts. i can hear the groans in the Research and Development workshops from here.

I was looking at the bigger picture and taking into account all the 20 mph speed limits too. The real deal remains with the MPG’s driving around town in a lower gear decreases the mpg’s and therefore increases the emissions vs driving along motorways at 50 mph which increases mpg and therefore decreases emissions. I don’t know of any figures that prove motor vehicle emissions within towns are greater than they are on motorways but I’m sure that’s the case.

Hence my original question will the emission savings gained by a 50 mph motorway traffic flow off set the increased emissions bought about by the recently introduced 15 and 20 mph speed limits in town?

I think they are two separate issues - and I imagine you are quite right on 20 vs 30.

As far as motorway limits go, most modern cars are in top gear by 50 and air resistance quite rightly as above scales with the square of speed. So as annoying as it would be, it would definitely have a big impact.

Around towns, air resistance scales linearly with speed and the stop start nature of town driving and short distances/cold engines are the main cause of pollution.

Are the 20 limits being touted as emission reducing? I thought it was all down to making the roads safer.

I don’t think there are many 20mph limits where it would be possible to do a consistent 30mph anyway.
With all the stop/starting, there’s probably very little difference in actual travel times if I stick to 20mph or not on my commute.

Most vehicles used in towns are for short hops that don’t allow the engine to reach an efficient operating temperature & are therefore going to be more polluting anyway.