I want to fit a light on the outside of my garage (by the garage door).

I could in theory buy one that requires power as there is power in the garage, but is there something less of a hassle to install that can run on solar or with a battery? Use will be very limited so was thinking of not investing too much time getting something connected, or getting an electrician out.

Recommended these to countless friends and family. Put several up for my parents because the council replaced the streetlamps for LED ones.

Great prices on your favourite Home brands, and free delivery on eligible orders.

Or there’s this kind if the light needs to be under an overhang with no direct sun.

I fitted one of these to my garage about 4 years ago & it’s worked fine since. Whilst you can get simpler ones which are just a single unit with the solar panel on top, my garage roof overhangs where I wanted to place it, which meant having the solar panel separate was a better solution for my needs.

Are these very bright? I’m conscious of annoying neighbours with a very bright light coming on all the time.

If you’re not looking for a PIR security-type light, I’ve got a Solar panel charger connected to an old bike battery with a bike LED spotlight attached via a switch. I used to have a few lights connected to fully light up the garage.

No don’t need security type lightjust something to give me a bit of light on the outside of the garage as I walk up to unlock the door. I can pretty much see it but a little bit of light would help

I had a quick look and there is a bit of overhang but I’m thinking this might solve it. Don’t know if overtime it might mess up the plastic gutter 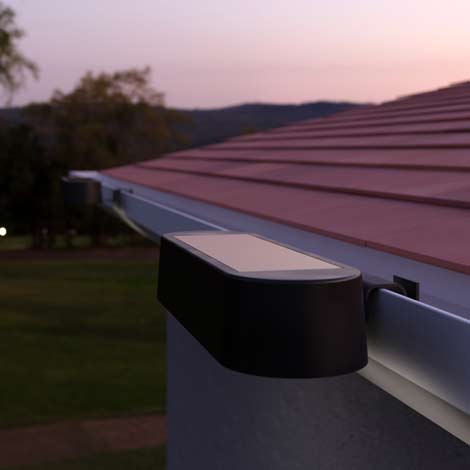 Add down lighting to your guttering quickly and easily with the Luxflow Solar Gutter Light.

Alternatively looking at something nicer like this. But have to see how.much sun the wall will get 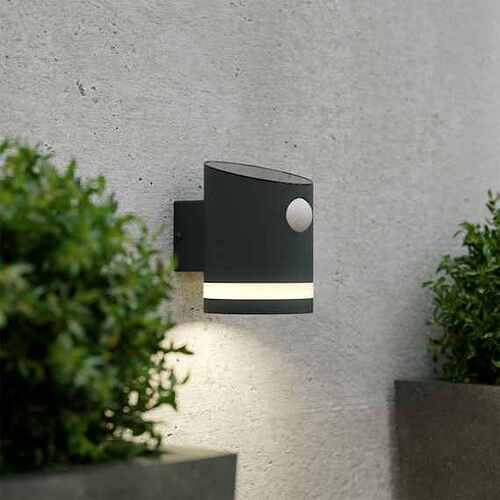 The Truro Solar Motion Light is a motion-activated solar powered down lighter designed to guide you to your door after dark using only the power of the sun now available in modern anthracite grey.

[quote=“Serrisan, post:7, topic:113554, full:true”]
No don’t need security type lightjust something to give me a bit of light on the outside of the garage as I walk up to unlock the door. I can pretty much see it but a little bit of light would help

That’s pretty much exactly why I fitted mine, as the garage is down at the bottom of the garden. It gives enough light to see what you’re doing without being intrusive, particularly as it’s only mounted about 2m high & shines downwards.

Just to add to this, I have two of these stuck under the lintel of the garage. Every so often they go dim and I plug them in to charge. Saves having an ugly solar panel sticking out.

Great prices on your favourite Home brands, and free delivery on eligible orders.

My garage is at the end of the line, next to a wall. Someone used it as a nice dark corner to take a shit one night, hence why I got these.

Oh yeah I have similar in bathrooms and cupboards.

Cheers, going to steal that for a cupboard renovation I’m doing atm

Someone used it as a nice dark corner to take a shit one night, hence why I got these.

So they can now see what they’re doing?

Serious reply: These look good, I might try some around the home. I tried the Ikea version a few years ago but they are useless - which is unusual for the blue and yellow brand which usually makes dependable stuff.

These are good but I prefer the warm light variant for rooms. I used them for the en suite as well as they were much less brighter under the cabinet than turning on lights at 3am…

My only complaint is that the timer is set to 10s and if you don’t move it can be a bit short.

In the end I ordered the pack of three lights. That way I can actually have two inside and one on the outside. I just have to keep moving

And you need to buy a bike

Don’t I know it… I’m looking around and would love a cheap runaround but I just don’t have time to be fettling around with mechanical things.

And at the moment, there are other priorities than buying a new (ish) bike…

Buy a torch. Battery run and you can position it where ever you need.

If holding it is a pain (Cos you are using yer hands) then easy to get a head torch. Under a tenner on fleabay.

Use them when I am away camping - really handy tbh.

Reminds me of the story (Probably apocryphal) of when the Russians and Americans first went into space in the 60s.

Because there’s no gravity, biros won’t work so the yanks spent millions inventing a pen where the ink would still flow without gravity to pull the ink down to the paper.

The Russians took a pencil.

A torch / head light is a valid idea (got both) but I don’t really want to have to take it out with me every time I want to unlock garage. The magnetic light will stick to the metal frame and be there all the time. It’s protected from rain so should be ok weather wise.

And this morning, after two months of living here, I found there was a switch for the light by the garage door, not just the side entrance - so now the two extra ones are surplus to requirements but I’m sure I’ll find another couple of places to put them.

Urban legend as you suspected. It was a company that made the pens, NASA just bought a load.

Can’t use pencils in space, the graphite dust floating around could have catastrophic consequenses when it hit a circuitboard.