So, is my wheel ruined?

On Tuesday I had my tyre replaced at FWR, and then did not use the bike since riding it home until today.

Before going out I did my normal checks, one of which is to make sure the brake light works with both brakes.  Oddly the rear peddle on lit it up with an extra effort after the brake was fully engaged.  I cannot think why that would have changed, but I adjusted it and also had a quick look at the brake and it all looked okay.

I was on the A12 and somewhere before the A127 roundabout the bike started to feel very sluggish.  It had been fine to that point and I wondered if I had got the gears messed up, though the revs suggested otherwise.  The roundabout gave me a chance to go to first and reset, but the problem persisted so I decided to turn off into the B&Q car park to take a proper look, and when I slowed down could smell a burning smell.

Pull into the car park and the brake peddle would not move (I guess I have become more used to using the front to have not noticed sooner) and when I got off there was smoke coming from the brake drum.

I adjusted the brake to unlock it, then left it a while to cool down.  After which I put it on the centre stand in gear to check it moved okay and the brake worked, and noticed it was wobbling slightly as it rotated.  Looking at the wheel adjustment marks the one on the left was further forward of the opposite one.  I know both were the same before I set off though as I checked when adjusting the brake light.

So I turned around and came home the quiet way, but when I got back and took another look the drum had changed colour (it still looked normal in B&Q).

Does this mean the wheel is no longer safe to use?   And if so should FWR replace it?  I had not touched anything other than the brake light adjuster, and surely I should expect the wheel to put back straight and tight.

But if it is not necessarily damaged then obviously I will need to take the wheel off and check the inside of the drum and shoes, so what should I be looking for and checking?

To say I am pretty fed up is an understatement. 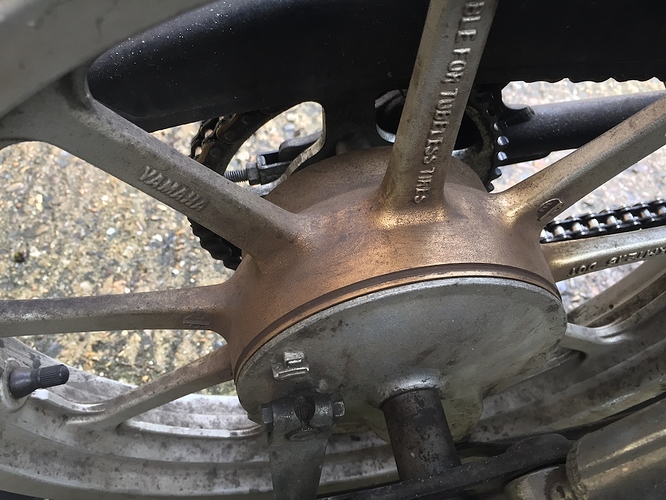 Would have thought your need new chain and sprocket if the back wheel wasn’t adjusted properly?

I’m not sure about your wheel; my hunch would be it’s ok - but that’s a wild guess.

At what point will you go all Basil fawlty and beat the damn thing with a twig?

Best thing rather than ask us .
Is call Fwr and talk to them if it is their error give them the chance to remedy it BEFORE you do anything to it .
If needs be get it recovered to them .

First thing to check for is the cause of the miss alignment start with the axel nut, bolt, washers, spacers and wheel alignment adjusters are these all fitted correctly and tightened to the correct torque? Other things that would need to be checked for correct fitment and/or abnormal wear include the tyre, the brake drum anchor, the brake drum, the brake linings, wheel bearings, the drive chain, front & rear sprockets, swinging arm pivot etc.

As TimR says, who was the last person to fettle with it? If  that was FWR best option at this stage is to get it back to them.

At what point will you go all Basil fawlty and beat the damn thing with a twig? Abzero

I was thinking about exactly that on the way home!

Wise — the brake problem before was simply a shoe not generating enough friction, and was solved by replacing it with a new one.  I have never had any problem with the physical mechanism, which is what frustrated me about the shoe problem as it I could not work out what happened.  I have never had the brake adjust itself at random.

I am pretty sure that what happened is as NT describes, the axel was not tightened properly and it slipped a little, pulling on the brake rod and locking the brake.

Was hoping someone would say it would be fine so I can just adjust the wheel myself, as I can trust myself to do that right, but it sounds like I need to call FWR tomorrow and see what they say.

Anybody who simple tells you its fine is just telling you what you want to hear and should be ignored and kept at a distance greater than an arms length from you motorcycle. In real life it needs to be inspected by somebody qualified to give an opinion.

A rear drum brake like that uses a metal rod to actuate the brake. Whenever the back wheel is moved, e.g. for chain adjustment, the brake MUST also be adjusted by slacking off or tightening up the nut on the end of the metal rod. If the wheel is moved back and the brake not adjusted there is a good chance it will be binding and will then get very hot (and change colour) if you ride it like that. Worst case, you will have cooked the wheel hub and all moving parts, especially the bearings, will need to be cleaned and re-greased, assuming they are still serviceable. Best case, there’s nothing wrong and it just needs adjusting properly.

So have you talked to FWR about this?

Came back to see what happened too. Don’t leave it.

Sorry for not replying yesterday, for some reason the site has stopped working in my normal browser.

I did call FWR first thing and someone came here to look at it that morning, so I cannot fault the service.  But he looked it over and said it should be okay, and that the bearings are fine.  Not to be too paranoid, but I will still give the axel a twist with my trusty Lidl torque wrench before riding anyway, as it has never let me down.

I reckon when the road speed went up to 50 the extra force on the chain pulled the wheel out of alignment.  Then it was as MikeDerBike says.  The tension bar rotated the brake forward a little whilst the brake lever was moved back up the rod a little, both effectively tightening it to cause the brake to lock.

The tacho bulb died ages ago and I have been meaning to replace it, so will try to do that today or tomorrow then see if I can get a test ride in before the weekend.