Anyone gonna b out tonite?

Gonna be kinda lonely all on me tod this weekend, gotta make the most of the weather b4 the rain gets here sun mornin.

The cupboards are bare so gonna want to eat also,

Gonna take the gixxer out for one last blast b4 she goes into hibernation, sum wicked roads up this way (rural bucks).

Mate, we missed you at Soho! Why you didn’t come up? Tomorrow 12am Jay and I will be at the Ace Cafe as it is the Subaru day and LAA, our charity partner will be there. Come along! Actually whoever fancy to come along and join me for a burger will be more than welcome

Hiya mate. I’ll b there.

Got back from work in time to get to frith, but it’s pissin down out here.

Missed you at Frith tonight, some georgous puppies about. The bad news is not so good though, Jay had an accident on his way home from Soho, don’t know details, I think he is ok, bike bad and a drunk padestrian lady? knocked over after jumping on to the road they say pretty bad. Hope they will all be ok.

Any way I can help let me know?

Might pop along but meant to be moving flats …

And finally noone showed up apart from me and Jason…

Nothing interesting going on, one accident, guy from blue Subaru (Ollie?) was showing off and hit another Scooby. 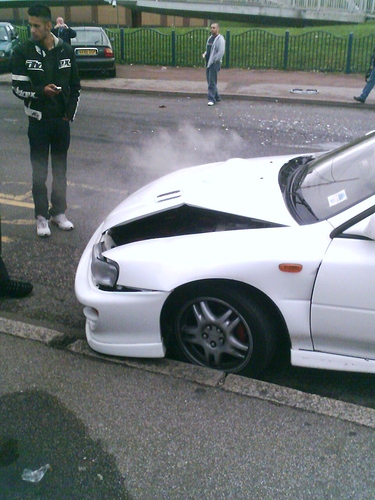 did get to ace today bout 2-ish, but spent time inside eatin,

goin back down later, say 9-ish hope sum bodies will b there.