ok so I reason my reg/rec is knackered. it’s on 33k, when the bike gets hot from slow speeds in the sun, the battery dies ie not charging. battery has been replaced.

IF it doesn’t, would a haynes allow me to see the wiring pattern? I take it’s there’s 3 wires from the alternator (AC) then 2 (+/-) out back into the system. is that right? I’ve no problem ritting spade connectors to the wires to fit it.

Rather than fitting one from the Yam (not that I know anything about this mod), wouldn’t you be better using a sheet of aluminum or a heat sink paste to help it run cooler? Perhaps even wire in a PC fan?

I think the wiring will fit as is - but yeah - get hold of a yam wiring diagram and check.

Try a yam forum - introduce yourself nicely and someone will probably have a pdf of the wiring diagram they can post up for you.

Is your R/R a finned one or the older plain? The later finned ones are supposed to last far better and are plug and play.

You need a mosfet reg. The shunt regs all get irrationally hot. Heat sinks help, some people fit computer fans. Mosfet units run cool and are a great deal more resilient than the shunt type.
Lots second hand on Fleabay. They look like this: 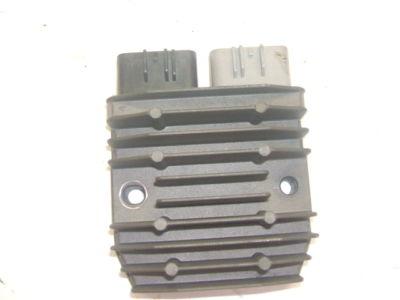 This thread is vfr specific:

Spade connectors will do, but some very sexy plug kits are available from

I did this on my blade, and it runs much cooler now.

reg/rec arrived in good nicl .got a bunch of space connectors too.

already thinking that SP. I’ve got a nice heatsink from a PBX I might mount both to a plate for extra heat loss maybe.

well done shiver, one of the stator wires was indeed very corroded. replacing that now.

well done shiver, one of the stator wires was indeed very corroded. replacing that now.

Woohoo all sorted with the correct readings?

well it’s in, spun it up and I get 14v easy but it got rather hot rather quickly which I’m not happy about.

Ok run the bike up to normal running temp check the voltage then hold the revs at 5k and see what the voltage reads at. Anything over 15 and it’s breaking down at temp

it’s close to 15v at 7k. I took it for a ride today and it was very hot very quick. 10 mins or so and I could feel the heat on my knee through the air gap and fairing. think it might be a duff purchase

Just check an eye on the voltage forget about the heat

my mate directed me to the haynes manual section where it lists all the resistance settings. I’ll be checking those tonight, as well as those on the old unit.

right well I might have a knackered multimeter OR 2 knackered units, there was a lot of overload resistance readings. progress will be updated shortly

bought another unit from ebay that the previous owner had tested as working (he had 3 spares). invited a mate over who knows more about electrics than I do and he was getting some weird readings on all 3 units off the bike.

I’ve sent the 2 rectifiers off to honda to be checked now. I’m doing something wrong somewhere.

It could be the fact YOU are trying to fix it…