Not too late to enter online at the RBLR website

The RBLR1000 is a challenging long distance charity motorcycle ride in support of the Poppy Appeal. Jointly organised by the Iron Butt Association (IBA) and the Royal British Legion Riders branch (RBLR). There are four 1,000 mile pre-verified IBA routes to choose from and two 500 mile routes for less experienced riders. Complete one of the 1,000 mile rides in under 24 hours to gain free lifetime membership of the elite Iron Butt Association.

The ride starts and finishes at Squires Cafe Newthorpe Lane, Newthorpe, Leeds LS25 5LX where there is free camping with facilities for rufty tuftys and several local budget hotels for others.

Three LB’ers on this now plus one other

How did you guys get on? (I pulled out for anyone wondering)

Head not in a good place (after friends accident this week). Sitting on a bike for a long period - mind would have been going over it - when it would need to be focused on road.

Bit of a nightmare this year.

Folly number one we took a detour on the A601(M) just because its there which turned out to be a little disappointing, although to be fair I don’t really know what I was expecting of it, it only added 3 miles and took less than 5 minutes for the experience so not a massive loss.

Folly number two was when Louis noticed he’s fuel receipts had gone AWOL, he failed to zip up his tail tidy and they are now somewhere unknown on the A82 safe from the elements inside a small plastic zip lock bag, we did back track a little but couldn’t see them. The timed and dated fuel receipts are the proof that you visited each checkpoint in the correct order, no fuel receipts means no verification, bad luck Louis a lesson learned.

Folly number three was adding an unnecessary hour to our ride time by taking the A93 over the Cairngorms National Park too late in the day. We should have been leaving Wick at 15:30 and the plan was to take the A93 only if we left Wick before 16:30 otherwise we should take the more direct A9. We had somehow lost 2 hours on the first half of the ride and we left Wick at 17:30. Plan the ride and ride the plan straight out of the window.

Folly number four Adrian went AWOL! Just south of Perth on the A9 we got caught by a group of four riders and they took a couple of miles to all get past us and after they did I noticed Adrian was missing at the back. We pulled in at the next lay by to wait and wait, after about five minutes and no sign of Adrian I decided to back track in case he’s broken down or worse. Turns out all was well and he’d only stopped for a comfort break, downtime was minimal but it all adds up.

We got to Edinburgh at midnight where Adrian & Louis felt they needed an extended rest and very sensible decided to take 40 winks. Adrian messaged me later saying they’d completed the 1,000 miles but felt too tired to return to Squires and had returned to their hotel and quit the ride. I felt fine at Edinburgh and, as agreed before the ride, invoked Rule #1 which was that no rider should hold the others up. I continued alone to the next checkpoint at Berwick upon Tweed followed by a comfort break and much needed sip of coffee at Washington Services where I meet and joined two other straggles and we rode the remaining 90 odd miles to Squires together.

I covered that last 220 miles in just over 4 hours including one fuel stop and one comfort/refreshment break. If we’d rode at that pace throughout the day we’d have been back at Squires by midnight, a realistic finish time and a time that I’ve achieved in the past. As it was I was the last rider back to Squires, checking in at 04:41, a comfortable 39 minutes inside the 24 hour deadline.

Do you remember when I said we would not make it back in time, due to bike problems? Well, due to some noises that seemed to be coming from the gear box, I decided to not risk it and ride slowly, so we got to the hotel an hour after the deadline. The next day I had a complete engine failure: it turns out it wasn’t the gearbox, but the crankshaft bearings being starved of oil, due to an internal oil pump cover leak. As the leak was internal, there was no way to detect that something was wrong.

How it all happened? When I started the engine that afternoon, for my journey back to London, the noise that it was making was much louder than in the morning, when we arrived back at the hotel. Called breakdown recovery, the guy started the engine, to try to determine what the issue was, after a few revs there was a loud bang, followed by a huge cloud of smoke, at which point the engine died. Now I have to either find a new engine or get a new bike.

Luis and I couldn’t figure out why the first part of the ride took so long either; we didn’t have any extra breaks, the ones we did have didn’t take long etc. Maybe higher motorway speeds are required, to compensate for busy single carriageway roads later in the day.

Every time I go to Scotland I am amazed at their roads and their scenery.

Luis here. Was a hell of a ride indeed.
Not really sure how we lost 2 hours on the way to Wick, John was keeping a good pace, but being law abiding citizens we didn’t go above posted speed most of the time, which dropped our average. The Highlands route, time consuming, but time well spent I’d say, just beautiful.
Next time I’m putting a stone inside the receipt bag…or maybe i should just remember to close the damn tank bag properly! The useless stickers didn’t fly out, just the receipts…

After our rest we could’ve made it to the squires with a 10 min window, if not for the kawa making more grumbling noises than my stomach at around 2am with, I think, 160mi to go. We slowly rode back but when near we saw no point in heading to the squires so late as we’d soon need to check out, and riding back without some sleep didn’t seem like a good idea. Unfortunately I had to leave Adrian to enjoy lovely Castleford and rode the 200 miles home in a tankful. Funnily enough instead of sleeping, I gave the bike a good wash and service as soon as I got home. 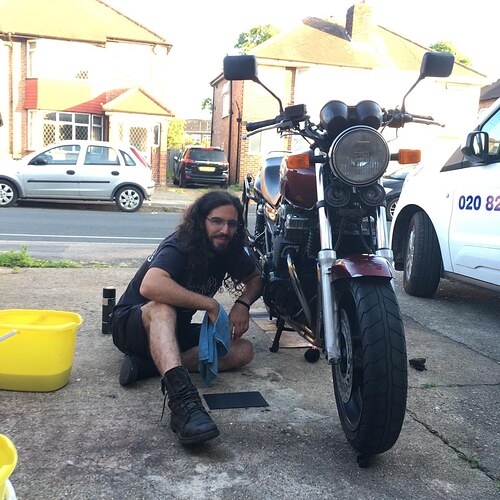 You know Adrian you say I should try some modern bikes, but my air-cooled 750 didn’t explode

Of course we started 20 minutes late due to somebody having a lay in, so I actually finished a very comfortable 39 minutes inside the 24 hour time frame, earlier post edited.

@AdrianD If it was mine I’d buy another mo’cycle and break the Kawasaki and sell the parts on fleabay. That way you’d only have to take it apart and of course the sum of all the parts will be greater than the whole.

I too had a little mechanical trouble on the last 50 miles into Squires and on the way home, I kept missing gear changes. At first I thought it was the feel of the gear lever with the new boots or maybe just me feeling tired. Once home I discovered part of the gear linkage had worked loose, so that’ll be another little job for today together with checking over other fastenings, a brake & clutch fluid change and maybe an oil change.

I think we lost time by taking too many fuel stops. We easily had a 180 mile tank range and could have managed the ride to Wick with two less fuel stops, taking comfort breaks as and when. The A601(M) quarry road detour also cost us time. Lets not dwell on the time though, it was a great ride in good company and the answer to my earlier question is a definite yes, are you two up for it?

Ahahahah, probably will have another go yes.