R6 experts - anyone about on Sunday to look at a bike?

Hello - Ive seen an R6 for sale (private sale) that I like the look of, its a 2006 model but has done 12k miles - just wondering if anyone would be able to take a look at this with me on Sunday? The bike is in Gravesend, kent.

I’ve spoken to the bloke selling it, sounds quite genuine - said hes been down to Assen a few times on the bike which has bumped the mileage up. Doesnt have any service history as such but gave me the name and number of the place that has done the servicing on the bike if I wanted to check it all out.

Anyone know these bikes inside out that could point out any issues?

Well i sell them - if that makes a differance!!

Do you know the Reg (PM ME)

Cheers mate, it all helps! If I can get someone to look at it for me on Sunday I’ll get the reg number off of him asap & at the same time I’ll get the details of the place thats done the servicing and speak to them before I go and look at it. He did tell me the name of the place but I’ve forgotten it already

I’m sure me and terry can come and look at it with you!!

I wouldn´t let the mileage put you off as most modern bike engines are bulletproof if the run in correctly and oil changed frequently.

But…What is the price of the bike?

As the average sports bike riders probably do much less than 6000 miles a year (with some doing less than 1000), you are in a great bargaining position.

Unless, he´s a dope, the seller will know that the bike even with that mileage is only really starting to loosen up and so is not worth a large amount less than what he paid, but still, as the competition has bikes with significantly less mileage on offer, he will be willing to do a deal.

Its up for £4.5k ono - he sounded a bit like David Beckham

Looks the nuts & if it is all cool I’ll buy it! Sean if you & Terry could have a look at it I’d really appreciate it, let me know if you can for sure

If the sellers about 1 evening in the week I can go and look at it then too if anyones about but Im not really clued up with what to look out for & dont wanna buy a lemon.

Yeah of course! Just let me know when

Sorry mate, I’ve found the bloke and bought the bike as a track bike…Offer was too good.

Having 2nd thoughts about that R6 now I’ve slept on it, I think I’d prefer to buy a bike from a dealer so I get a warranty for some piece of mind - I cant wait to have bought a bike and be done with it! I was awake at 4am thinking about bikes this morning

I was gonna say, see Sean as he works at George Whites.

Also found this one for £4k - late 55 reg, 13k miles, 7 month Yamaha warranty with FSH, comes with a 2 month old Arai and a Haynes manual

Its in Bristol tho

See attatched pic - I quite like it, just not sure about the mileage, bloke said it was used by the 1st owner to commute and then by him for sunday ridinging and he went to Ireland on it, pretty much what Im going to be doing ie: commuting and weekends - Hes only done 1k miles himself on it. 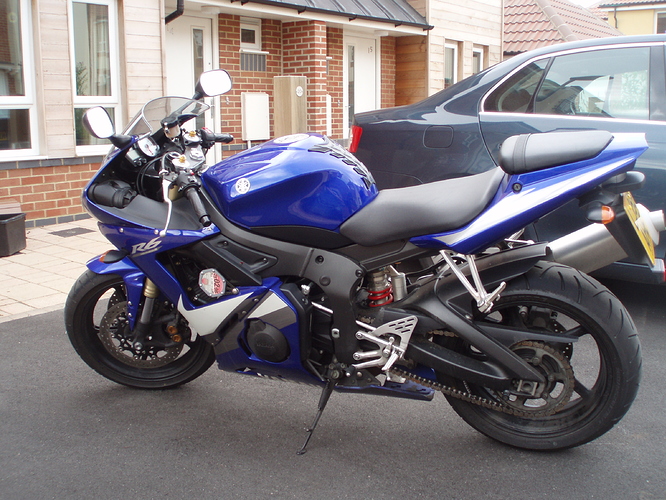 Last of the great R6 road bikes…Much better than the new one for road use and not exactly bad on track either.

I think my minds made up on this one now - I better go and look at it asap before I change my mind and want to get something else!

Only problem I’ve got is getting it home from Bristol if I do buy it!

Er…why…don’t you have a licence?

Speak to Adz on this forum…He may be able to help as he has a van.