You need the Mods on every site. But more so if you are going to let people post at night

Do the Mods have access to PM’s? If not then I think they should as it could sort any and all problems. After all we are living in a Labour run country

I doubt it is an easy job and not one I would like to do , that’s for sure.

Definately not I bet they get lots and lots of abuse it cant be nice.

seeing as a forum is just a database and a PM is just an entry on that database, then of course, the administrator of the site can view all PM’s

I can do it on my forum, but stopped after the first week, there are things that I didn’t need/want to hear

Watch what you say guys

sorry… we can’t actually read your PMs at all… it’s encoded in the same way as email… so the only way we could read your PMs would be to change your password - which you’d know about!

I suspect mods in general don’t have privileges to read PMs but the forum adminstrator account will have. But to be honest, who would want to? There are a couple of thousand members and quite a few actually know each other so there must be tons of PMs each day, most of them only of interest to the people sending and receiving them. For goodness sake, it takes long enough to read all the posts, they’d need to employ an army if all the PMs were going to be read as well! However I believe it’s part of them there “rules” that PMs may be read, so although it’s unlikely, your PMs could possibly be read, particularly if reported. So play nice in your PMs peeps.

And yes, being a mod is a pretty thankless task, but an essential one. (I can say that as I’m a mod on a non-biking forum and do get a bit of grief for it too.) I haven’t seen a great deal of mod interference on this board though of course I’m only new here, but it’s a difficult balance to strike and there will be times when the Mod action will be seen as either too heavy- or light-handed for the tastes of some - a times the same moderation action will be viewed as both, an unwinable situation. In general though, good moderation will appear invisible. I bet there are frequent posts advertising mobile phones, or sex chat lines or all sorts of other rubbish, which probably just gets removed without anyone on here even realising it. THAT’s good moderation.

Keep up the good work, guys.

I just want to confirm that No one - not even the administrator or owner.

That does sound a little strang and you would think that the place where you keep you PM’s would be an area where they would have access?

I don’t give a flying as I’ve got nothing to say on PMs that I dont want to say on this site. I’d also not want to be a Mod and I think the numbers on here would be cut. Don’t know who I’d ban but it would depend most on what bike they rode

This is why I was confused, see following quote from “the rules”:

“The administrators of this site reserve the right without notice to access or view all such material (including posts, profile information, emails sent through the forum software, and Personal Messages (PMs))”

and also I know on a forum that operates using vBulletin the administrator account CAN (but choses not to) read PMs. But you are in a position of knowledge, so I’ll take your word for it. Might be worth modifying the rules in that case…

I strongly beg to differ Matt, it’s not done in the standard way of logging into someones account.

Yes, all passwords are encrypted, they have to be, but a PM is a database entry.

Using a programme like phpmyadmin the site owner, ie the one who knows the database name/connections can read and pull out any entry, all software I have used lets you do this.

If this site uses different methods then I’ll apologise.

It’s not a straightforward thing, but there will be a table called ‘lb_instant_messages’ or similar.

You can query that and read them by user.

My table for passwords is the only one that is encrypted, my forum rules state also that PM’s are visible by site admin.

Same as all the deleted posts, Pm’s etc, they all remain on my server. 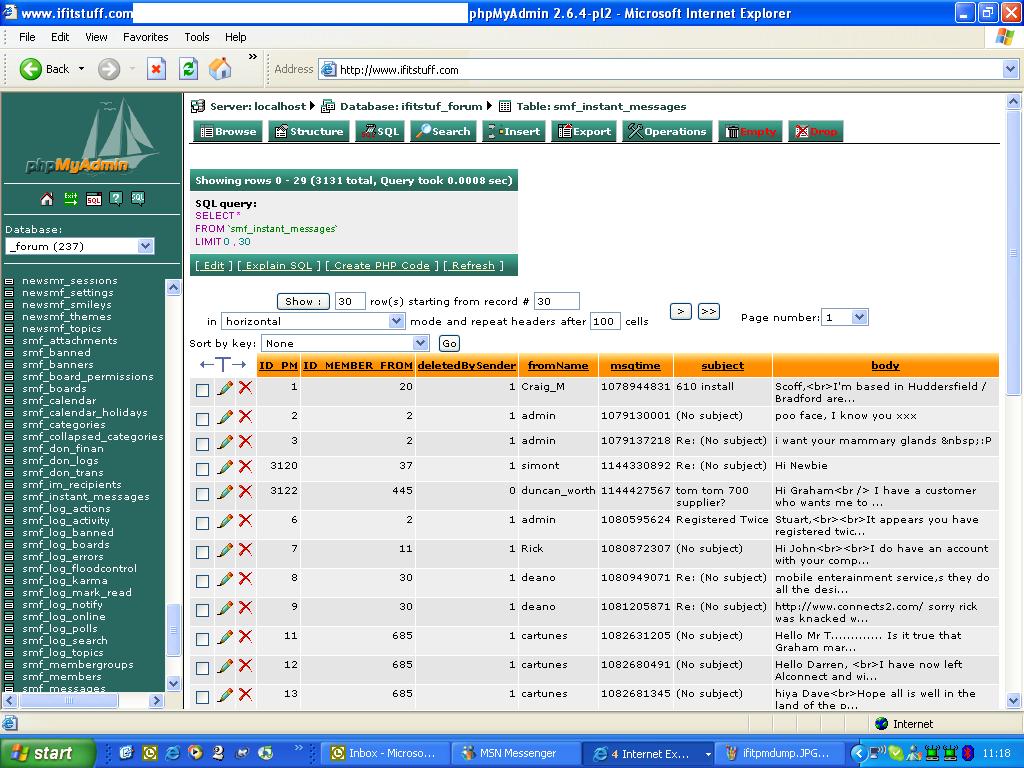 Do I owe you an apology Matt or do you owe me one?

If I’m wrong I’ll be the first to apologise

Hey Wigs, you’re talking about PHP there fella, which is a very different animal. I’ve run PHP databases before any your right they are that easy. But LB is not PHP.

Not claiming to be a tech or anything but as I understand it, the complexities of doing such things on LB is like nuro surgery. Well nigh impossible.

But that’s Apache is it not? It’s different mate.

I’m sure Jay will post when he has a moment. But our forum software - heavily customised - does not allow us to read peoples PM messages. As I’ve said before they are encrypted the same as emails and the only way we could read them would be to ‘hack’ into your account… which is illegal and we would never do… None of the SQL tables that hold the PMs are plain text readable.

Ok, I’ll take that as me being wrong and I apologise

Maybe you need to change your agreement file to mention that PM’s are not viewable then and that they are private, just to reassure people?

That’s not a bad idea - but I should also point out - that it is illegal for us to do this… ie read the PMs - not change the T&Cs.

Very true… but we don’t do that do we? Or am I being thick and missing something - that’s always very possible you know