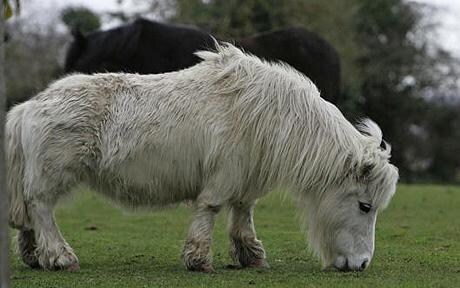 A Shetland pony with startlingly short legs has cost the taxpayer thousands of pounds, because passers-by think she is sinking in mud and keep ringing the emergency services.

Firefighters answered their fourth call this week – at a combined cost of nearly £8,000 – to save the life of the 2ft 4 ins tall pony they have nicknamed “Shorty”.

The animal’s stumpy legs are so out of proportion with its long body that people continually assume she has become stuck in the salty marshland where she grazes.

Animal rescue expert Anton Phillips, of Hampshire Fire and Rescue Service, was dispatched with 12 other firefighters to help the animal before they realised it was not in any distress.

Two fire engines and a specialist lifting vehicle also attended the marshes by the River Test in Southampton.

Mr Phillips, 50, said: "This was the fourth time we have been called out by members of the public who have seen this pony on the salt marsh.

"We all inherit characteristics from our mother and father and sometimes something odd happens like this.

"From 200 yards away it does look like the pony is trapped in the mud, especially when it is stood next to New Forest ponies which are about twice as tall.

"It is right for the public to call us if they are concerned and of course we will always respond.

"But every time we get there we can see very quickly what we were dealing with.

"The pony is oddly shaped but it is fit and healthy and there is no reason to worry about it.

“There is a cost implication to consider and call outs like this are a big expense which is fine when it’s legitimate but we must look at giving taxpayers best value.”

Owner Sandra Whitcher is now considering putting up a sign beside the 12-year-old pony, named Mayflower, to make it clear she is not in distress.

She said: "People are always phoning up and saying Mayflower has got stuck in mud when she’s perfectly OK – she’s just got short legs.

"We have had animal rescuers, the police and the fire brigade up here.

"When they get here Mayflower sees them and just runs off so they realise she’s not stuck at all.

"The emergency services have been out so many times they must know the way by heart.

"We might have to put up a sign so passing motorists know the horse is not stuck.

“The only problem is that one day she might actually get stuck and then the fire brigade won’t turn up.”

The Government has estimated that the average cost of a fire crew attending a false alarm is £1,970.

Aaaah so cute, my horse could step over her.

Which part of a horse stuck in some mud is an emergency :ermm:

They should prosecute the muppets for calling 999 for something as stupid as this. A complete waste of the Fire Brigade’s time:crazy:

Which part of a horse stuck in some mud is an emergency :ermm:

They should prosecute the muppets for calling 999 for something as stupid as this. A complete waste of the Fire Brigade’s time:crazy:

And the owner recons shes had animal rescue, the police and the fire brigade (now four times) so shes NOW CONSIDERING puting a sign up.

Aaaah so cute, my horse could step over her.

maybe they should buy it some stilts

Do they do “lifts” for horse shoes?

Loved the government borrocks on the cost of false alarms.

Give me the raw data, I’ll “prove” they cost next to nothing.