Well, that’ll learn me not to ignore the results of falling off my bike! Had to visit the doc today to get something for my arm. It felt just fine right after coming off yesterday, but this morning it was horribly painful. I had an x-ray done, and there’s nothing fractured, just bruised, but I’ve been given two different painkillers, one for the day and the other for the night-time (the night ones are stronger but I wouldn’t be allowed to ride if I took them in the morning).

I guess yesterday I was all full of adrenaline, but today it’s soooo sore :-(. I wanna go home but I’m stuck here working until Friday sigh. Looking for sympathy now!

Have they given you some seriously good sheeet

Have they given you some seriously good sheeet

Nice. Hope you’re arm gets back to normal sharpish, and that you don’t end up addicted to hard pharmaceuticals

The first time I came off my bike, I was straight back out the same evening on my other bike, regardless of the fact that my hip was a bit sore etc… I thought it was better just to get back on the bike and get on with things, fight the demons and all that tosh!

However, my hip got mre sore as the evening went on, and eventually I woke up the following morning in a great deal of pain! “ahaaa!” I thought… "I have some of those Percosets left from all those years ago when I was in the american army hospital in Kosovo! One of those badboys later, I was sat gurning like an idiot, forgetting why my hip was hurting, or indeed that I had a hip! :w00t:

Anyway, this carried on for a few days, with me limping about and dosing myself up on american morphene pills!

Then, ten days later, after all the bruising had properly came out and I was still in a fair bit of pain, I decided to admit defeat and went to the A&E for a checkup… :ermm:

So, it turns out I had actually took a bloody great big chip out of my hip and I’d been walking about on it! :pinch::w00t:

Here is the aftermath… 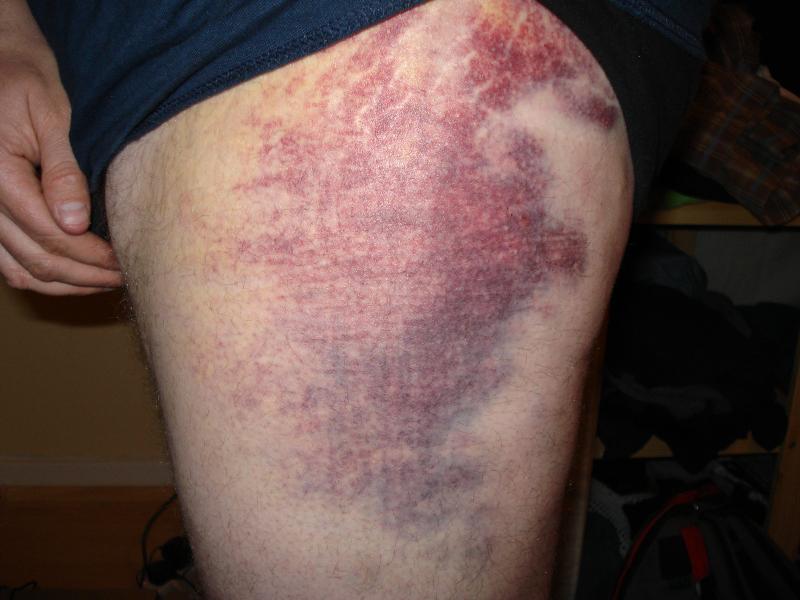 Ouch! That looks much worse than mine - my sympathies.

I woke up around 04:30 and it hurt, but I took my morning pain killer and now an hour later it’s back to a dull throbbing - and it’s better than yesterday. Can’t get back to sleep, so I’m going to go for an early morning ride down to Southampton before heading to the place I’m working today (only about 15 miles added to the journey) and spend an hour or so riding near the sea. Later

p.s, you got any of those pills left over?

I can neither confirm nor deny whether I may or may not have some of those incredibly strong pain pills left!

I can neither confirm nor deny whether I may or may not have some of those incredibly strong pain pills left!

time for a BH raid at your place then :w00t: