but can anyone tell me where about is the wear indicator on knobbly tyres?

Also whats the score with the legal tread depth to pass an MOT with these tyres? is it any different to the 1mm across 75% of the tyre rule that applies to conventional road tyres 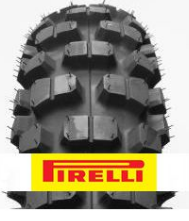 I think it is just the 1mm thing. A bigger concern, though, is whether they were road-legal to start with. It’s not hard to buy not-for-road-use knobblies. Which tyres are they?

Yes these one are Road legal. They are pirelli rallycross mt21s

As far as I’m aware, it’s still 1mm of tread, buy they will be basically unusable off road anyway.

Have them tyres myself…don’t think they have a wear Mark pic of mine in link below pretty shot to pieces for off road but still fine for the road…they don’t actually last long when used on the road mine has about 2000km on it
https://goo.gl/photos/VsHGbzhoiY2rtkrZ9

I had them on my drz, lasted well for a knobblie if you keep it under 50mph

Awesome tyre on and off road as long as you do what Boris says and keep the road speeds down. Otherwise you’ll go through a set in 1/1.5k miles

As long as they get me through the mot then its all good. I only really use them on road to get to and from the lanes so didnt want to have to get a new set just for the mot to pass.

You’ll be fine, I’ve mot’d my ktm a couple of times with knackered MT21’s with no problems. The exhaust is another matter…