“Number Plates must be easy to read and meet the British Standard” see, i mean do they have to be 90 degress to the road or what??? the reason i ask is I have a very nice number plate brackett that manually hinges the idea is to ride with it visible but hard to read, and i ponder on the reaction to the police??? 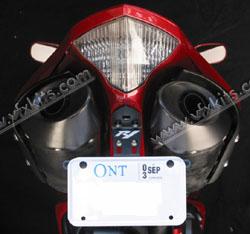 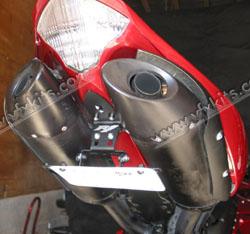 There is a regulation yes, the most obvious case of manufacturers having to meet this regulation is the 2006 R6 numberplate. It sticks out the way it does due to some regulation on height and angle, I believe. I don’t know the specifics though. I suspect the DVLA website will prove a bit more useful.

Also, having a fold-up plate like that R1’s will get you busted quick-sharp, they really don’t like that, as it shows intent to deceive or something, bad news whatever the classification.

dont piss on my fireworks

, ill see how i fair with it, i suppose having flush against the pipes is takiing the piss maybe a slightly readable angle

Not sure of the exact wording of the law but I think you will find they need to be read easily… so if it is facing the sky then expect a tug.

PS I think Jay was only trying to help, not “piss on your fire”

PS I think Jay was only trying to help, not “piss on your fire”

I know, it was tounge in cheek relax its just a coin of phrase no harm intented