Pick her up on Tuesday…

Why an R3?! Gen question I don’t know much about them, is it a restricted license thing?!

Looks lovely. Saw one in the Alps earlier this year. Quite fancy one.

No I think it is more a low seat, light, small and nimble thing. Just like a mole.

It’s only a 169KG and makes 42HP, which for a lot of people is more than enough.

Nice btw. Enjoy the ride, so what is this going to be called?

@ Firo, Kev is spot on - the low seat (I wanted an R6 for almost a decade but the seat height is something stupid like 32.5"), the turning circle has been reviewed as good (as opposed to the R1), and as Kev says, 42hp is about right for my liking - I had an NC30 which is ideal but broke… this seems to be the best fit.

@ Kev, very good question, she hasn’t got a name yet… Maybe if I get to Borough on Weds, maybe people could help me come up with a name?

@ Changyammi, thank you! They are not very advertised/well known yet - but they seem to be quite popular with the dealerships. There is a new matt dark grey version out next year.

Oohhhh, that’s NICE! Although I’ve got the 675, I really like the smaller cc sports bikes for exactly the reasons you’ve said.

Very nice Laura,I was looking at one today at a dealers in Harlow

Ah, it was your bad influence via mind control then eh??

Hmmm, a life living clean and straight, and he’s turning to the darkside.

Congratulations, its a very nice bike. The girlfriend has one as her 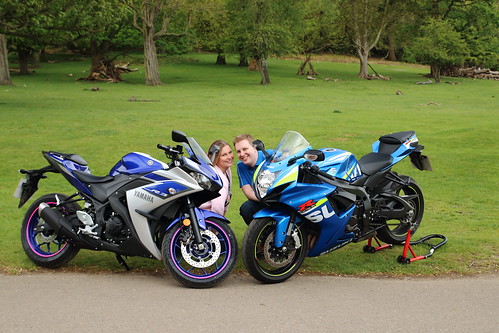 Laura,I’m sure I will see you at the hut on it and hopefully standing in the queue buying the essentials!!!

@mole - right with you now, I ve never tested the turning circle on my r1, I ll assume it’s shit though ha!
So it’s accessibility then, have you ridden one?! It’s a good looking bike! Come a long way since my days of rs250 was my dream bike!

Firo, ah the rs250 is also a good looking bike! No, I haven’t had a test ride yet, but when I squashed it twice in the yam dealer the ergonomics were not dissimilar to the NC30. Once upon a time a long time ago, I used to own a yamaha TZR 125… that brings back memories (mostly of having 1 and a half motorbikes spread around my flat lol).

I shall try to come to borough market Wednesday if you’re gonna bring your new toy out?!. I had the rs125 - great little bike : ) I got the new r1 you can have a nose around!